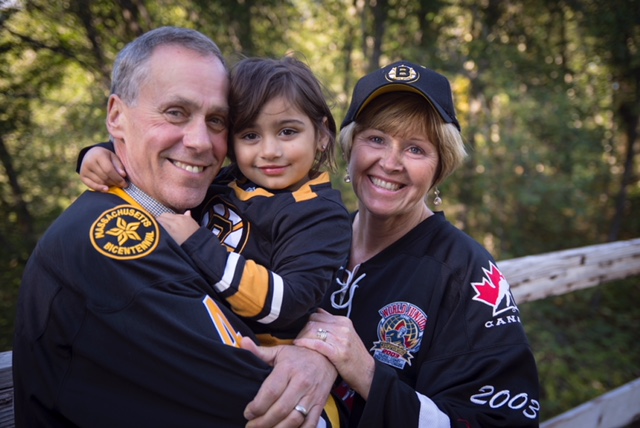 Heart transplant recipient Robin Lapointe with his wife and granddaughter.

More than 300 transplant athletes, living donors, donor family members and supporters from across Canada, the US and Mexico will converge on UBC campus next week for the Canadian Transplant Games, a celebration of strength, joy and inspiration. Held every two years, the Games are the premiere athletic celebration of sport for transplant recipients from across the country. As the provincial heart transplant centre and one of two adult kidney transplant centres in the province, several St. Paul’s Hospital patients are taking part. We introduce you to two first-time Games athletes.

Robin started coming to the Heart Centre at St. Paul’s Hospital 30 years ago when he was first diagnosed with hypertrophic cardiomyopathy, which turned out to be genetic. The condition was manageable, until two and a half years ago. The Kitimat man says, “I noticed a substantial change in my energy level and it didn’t seem to matter what I did, it continued to diminish.”

With no other options, he was put on the transplant list last September. In early October, Robin and his wife decided to temporarily move to Vancouver for the wait because winter travel conditions from Kitimat can be very challenging. Just five days after they arrived in Vancouver, his transplant team offered him a second chance at life – a heart was available.

Nine months later, the 64 year old is about to compete at his first Canadian Transplant Games in his favourite sport, golf, and he is so grateful, “This is going to be very special for me in many ways. Not only do I get to participate in a sport that I never thought I would play again, but most importantly I get the opportunity to say thank you to all organ donors.”

The father and grandfather (and Bruins fan) is also grateful to everyone at St. Paul’s, “I have survived all the different stages of my heart condition only because of the very special group of professionals at St. Paul’s. Not knowing what to expect, the support staff is not only incredibly knowledgeable, they are extremely personable and understanding. We are very fortunate to be able to live in such a beautiful province and have access to first class medical care. “

It took Brenda a while to get a diagnosis of IgA nephropathy – a kidney disease that causes inflammation that damages kidney tissue – and she was told initially most IgA patients never need dialysis or a transplant. However, within a few years the Abbotsford mom’s kidney function was so poor she was on dialysis, a gruelling 18 hours a week for the family’s sole bread winner and caregiver.

Brenda’s daughter was at the initial appointment at St. Paul’s to discuss transplant, and much to Brenda’s surprise, Kielah immediately stepped forward as a donor. Kielah was 22 year old at that time, and she was determined. Brenda remembers, “I was terrified it would limit her in having children or harm her in some way, and I was also extremely proud.”

Unfortunately, Kielah wasn’t a match to her mom, but when asked if she would consider the Kidney Paired Donation Program, she didn’t hesitate. So on July 16, 2013, Kielah flew to Calgary to donate her kidney, and in exchange, Brenda received a kidney from an anonymous donor at St. Paul’s.

Brenda ended up staying in hospital for almost three months after her transplant because of an infection, and required an additional three months of follow-up treatment. But she says the care she received helped get her back on her feet, “All the nurses and staff at the Kidney Clinic assured me I was going to be fine, and really helped me that first year, giving me the confidence to learn to live my life once again.”

Since then, mom and daughter have both done amazingly well. Kielah now has a three year old son, who loves swimming and running around with his grandmother. Brenda says she is healthier now than ever before, participating in yoga, paddle boarding, softball and tennis. Along with volunteering as Manager of the Canadian Transplant Games, the 50 year old will be competing in tennis and ball throw. Brenda says, “Kielah is so humble about donating her kidney. To her, it was an act of love and selfishness at the same time, so that she could keep me here longer.”

Spectators are welcome to come to the Opening Ceremonies and sporting events. For more information about the Canadian Transplant Games, please visit the website here.