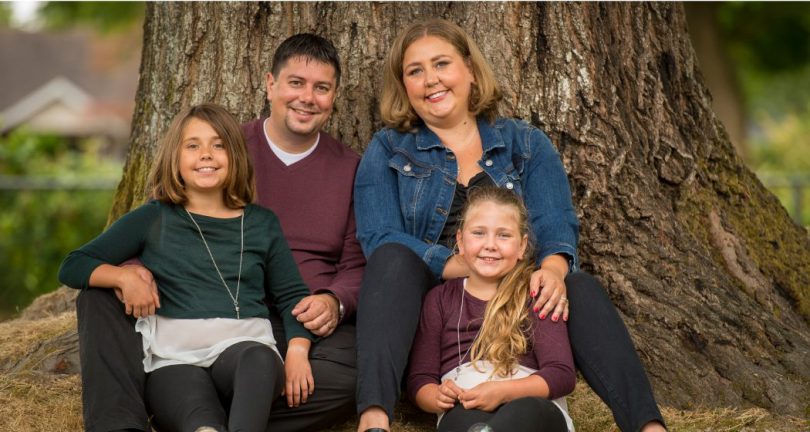 Hayley Atkinson and her husband, Bill, along with their two daughters, Rebecca and Liah.

The iconic Lights of Hope at St. Paul’s Hospital may be a beloved holiday tradition and major fundraising initiative, but for Hayley Atkinson, the dazzling light display is so much more. The Richmond woman describes it as a beacon of hope and joy, “The Lights of Hope mean everything to our family.”

In 2003, Hayley and Bill Atkinson were engaged, finishing school, and planning their future when everything came to an abrupt halt. Hayley’s kidneys were failing as a result of an auto-immune disease. Her nephrologist, Dr. Abeed Jamal, recommended an immediate six-month course of chemotherapy. Atkinson was devastated: she was 20 years old and feared the treatment would dash her dreams of having children. Although Jamal wanted to start the chemo right away, he understood the couple’s concerns and sent them to a fertility specialist.

“That’s the way they do things at St. Paul’s,” Atkinson says. “Right from the get-go, they weren’t just treating my disease, they were treating me and the life I hoped to have.”

It was a whirlwind, not only with tests and treatments, but with a hastily planned wedding. Bill insisted they move up the date so he could truly be with Hayley in sickness and in health. Two weeks after her diagnosis, their families gathered to celebrate their marriage.

Let there be light

Chronic kidney disease can’t be cured, but it can be managed. Atkinson’s renal team spent the next two years trying to control her condition, but eventually she had no choice but dialysis. Atkinson’s mom, Jeanne Wunderlick, remembers how hard that was. “People don’t realize how debilitating dialysis is. You’re existing, but you’re not really living,” she says. It was time for a transplant. When Wunderlick learned she was a match, she insisted on being the donor.

“People worry about giving up their ‘spare’ kidney. But if you’ve been a kidney donor and one day need your own transplant, you go to the front of the line.”

The surgery was a gamechanger for both. Atkinson’s quality of life improved immediately. And Wunderlick experienced the joy of watching her daughter bounce back. “It’s a euphoric feeling to give someone the opportunity for a good life – a really good life,” says Wunderlick. “And it hasn’t cost me anything; I just turned 65 and I’ve never felt better!”

A year later, Atkinson got the green light she had been waiting for: they were cleared to try for a baby. “We didn’t know if we’d be able to have kids. But it actually happened very quickly,” she says.

Dr. Elisabet Joa, Atkinson’s obstetrician, coordinated her prenatal care with the renal team. “It made me feel so secure knowing we had baby and mom covered,” Atkinson says. “We made it 36 weeks without any significant complications.”

That was until December 18, 2008, when a freak snowstorm shut down the city just as Atkinson was going in for her C-section. Fortunately, they got to St. Paul’s in time to welcome their firstborn in the wee hours of that wintery night. With mom and daughter safe and cozy inside, dad stepped out to take photos of the hospital wrapped in the quiet, snowy brilliance of the Lights of Hope. The little family was discharged on Christmas Eve, with baby Rebecca Hope named in honour of their incredible experience.

Let there be hope

A year later Atkinson’s doctors gave the all-clear for baby No. 2. But this time there were serious complications, and at just 20 weeks, she was put on full-time bedrest. For two months, the renal and obstetrics teams worked together to preserve her kidney function and delay her delivery. For Atkinson’s unborn baby, each extra day could mean the difference between life and death, between good health and lifelong challenges.

In her 26th week, it was clear the baby wasn’t going to wait much longer and responsibility for Atkinson’s care was transferred to BC Women’s Hospital. (St. Paul’s can only care for preemies after 32 weeks.) Atkinson’s doctors from St. Paul’s were in constant communication with her caregivers at BC Women’s to ensure the best possible outcome for both patients.

Atkinson credits that exceptional teamwork for the gift of an extra 21 precious days. Baby Liah Grace was born at 29 weeks, tiny but feisty. Atkinson was well enough to go home after a week. Liah stayed another month and was then transferred to St. Paul’s for another month and a half.

However, the pregnancy had taken its toll and Atkinson needed another kidney. This time, a dear friend from university stepped forward. In December 2013, Carolyn Putt celebrated her 30th birthday at St. Paul’s by giving Hayley the priceless gift of good health, and quality time with her children and her family.

Putt is incredibly modest. “I really don’t think of it as a huge sacrifice. In fact, I wish more people were aware of how easy it is to donate a kidney. Honestly, you won’t remember the few weeks you were off work. But for the rest of your life, you’ll know that you saved and changed someone’s life.”

The future is bright

And so, for the second time in five years, Atkinson left St. Paul’s – this time with her best friend and her new kidney – on Christmas Eve under the magical spell of the Lights of Hope. Hayley knows she could require more transplants over the course of her life. Her entire family approaches the subject with humour. At a recent gathering, Atkinson was poking her nieces and nephews in the side and joking, “Just checking on my future kidneys.” Atkinson’s seven-year-old niece piped up, “I want to be your donor!”

As Hayley prepares to celebrate another Christmas, she is so grateful to the care she received at St. Paul’s that has given her new life, and two healthy children. You can hear the deep emotion in her voice as she relates one example, “One day, Dr. Landsberg, head of St. Paul’s entire nephrology program, phoned me at home during my pregnancy with Liah. He said he had a ‘feeling’ and just wanted to check in to make sure I felt OK. How many doctors would do that? Especially someone in charge of the whole department?”