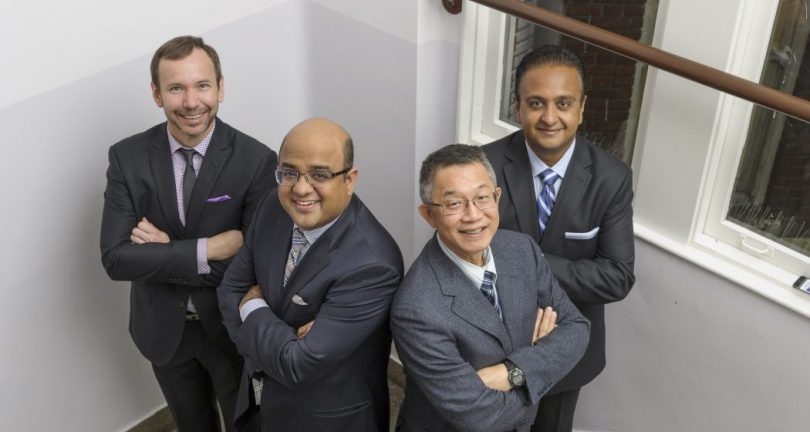 This story originally appeared on the St. Paul’s Foundation website.

When Geoff Marsh discovered that he required surgery for rectal cancer, he was determined to bounce back to his active lifestyle as quickly as possible, and to break the record for the shortest hospital stay following the operation.

“The day before my surgery, I did 44 push-ups and a four-minute plank,” says Marsh, whose colorectal surgeon at St. Paul’s, Dr. Manoj Raval, observed that the 71-year-old Marsh looks like a 51-year-old.

Thanks to his pre-surgery fitness, a skilled surgeon, and an innovative surgical technique brought to St. Paul’s, Marsh tied the record, going home just two days after his six-hour operation.

Most colorectal tumours are removed through a large incision in the abdomen. But Marsh’s tumour was near the bottom of his large intestine, deep down in his rectum. It’s challenging to access these tumours from the top down because of the increasingly-narrow funnel created by the pelvic bones and the dozens of muscles that hold everything in place.

So instead, Dr. Raval approached the tumour from the bottom up, getting to the tumour through the anus rather than the abdomen. “It’s called transanal total mesorectal excision (TaTME) and we were one of the first centres in Canada to offer this procedure about five years ago,” says Dr. Raval. “We built on the techniques we’ve honed since 2007 performing almost 900 transanal endoscopic microsurgeries (TEM) to remove large rectal polyps through the anus. With TaTME, we can now remove the entire rectum by operating through the anus.”

TaTME gives surgeons better access to these low tumours, requires only a few small incisions in the abdomen, and means faster recovery times (even for patients who aren’t as single-minded as Geoff Marsh). As well, tumours near the sphincter can often be removed with taTME without the need for a colostomy as is the norm with conventional surgery.

But for patients with a cancer diagnosis, the most compelling reason to have this procedure is the chance for a better prognosis. “For me, it was a total no-brainer,” says Marsh.

“Although there is a steep learning curve with taTME, when performed well, it can mean more of the cancer is safely removed leaving a healthy margin of normal tissue,” says Dr. Raval. “This can result in a much lower chance of recurrence.”

While TME has been the gold standard for tumours deep in the pelvis for some time, TaTME – the newest innovation of TME through the anus – offers huge advantages to the patient. And with nearly 200 of these complex surgeries to its credit, St. Paul’s has become the colorectal referral centre for patients across BC and, in some cases, Western Canada.

As for Marsh, he has long since returned to dancing the Argentine Tango with his wife, playing with his five-year-old granddaughter, and working out. He has a new mission as well: promoting colonoscopies. “I didn’t really want to have one. I had no history of colon cancer, and I’m fit and healthy. Big mistake.”

His advocacy is already paying off. “My daughter, who is 42, listened to my advice and booked her colonoscopy.”