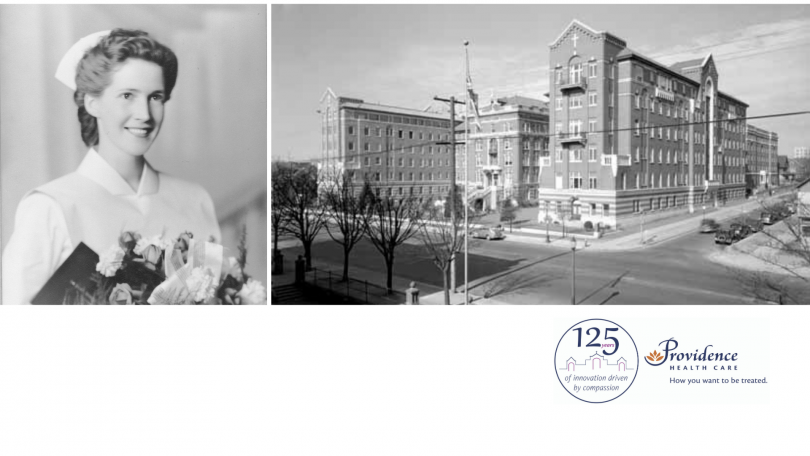 Jean Rathbone (née Anderson) graduated from St. Paul’s Hospital’s School of Nursing in 1945. Speaking to her granddaughter, Megan Birnie, Jean recalls her life as a student nurse during the Second World War.

Jean Anderson always knew she wanted to be a nurse.

Born in Kamloops in 1922, Jean moved to downtown Vancouver with her mother and two older sisters in 1928. Her mother, Effie, ran a rooming house on the corner of Nelson and Howe Street. When it came time to apply for nursing school, St. Paul’s Hospital was the obvious choice.

“It had a good reputation and my older sister had graduated from St. Paul’s in 1936,” recalls Jean. “It made sense for me to go there even though I wasn’t Catholic.”

She began the three-year program in 1942, in the middle of the Second World War.

“It was war time so it was quite stressful,” Jean reflects. “The first thing we were given when we started were gas masks, and we had blackout curtains as well. There were people who went around at night and made sure there was no light showing from your window.”

Jean and her fellow nursing students lived onsite in the nurses’ residence, in what is now known as the Comox Building. The training was rigorous and the hours long. In addition to eight-hour work shifts, the students attended anywhere from one to three additional hours of lessons each day and had just one day off a week.

“We didn’t get paid when we first started. But there was one girl in my class who thought we should be paid. So there was a little bit of a rebellion, and they decided to pay us. So that first year we were given $5 a month, and that went up a little bit in the second and third years. But if there were any breakages, it was taken out of the little bit of money they gave us,” says Jean.

Daily tasks for a student nurse varied depending on which ward the students were assigned to, but usually included flushing bedpans, changing linens and delivering meals to patients.

Each afternoon, when the surgeries were completed for the day, the students thoroughly cleaned the operating room equipment. Another important practise was counting the sponges and surgical implements to ensure nothing had been left behind in the patients. Because it was war time, there was a shortage of standard equipment and materials. For example, the rubber gloves that the surgeons wore were in short supply so gloves had to be washed and tested for holes before being used again in the following day’s surgeries.

“One of the nurses took a shine to me because I was good at testing them for holes. So I spent a lot of time on gloves.”

Personal grooming was of utmost importance to the nursing profession in the 1940s. Nurses’ hair had to be cut short and kept well off their shoulders, and their caps and uniforms had to pass daily inspection from one of the sisters. Lipstick and rouge were not allowed to be worn; only minimal, natural looking make-up was permitted.

Personal time was limited for trainees and their comings and goings were closely monitored. Student nurses had to be home each night no later than 10 p.m., and they were allowed one overnight at home each week. Students were expected to display exemplary behaviour at all times, whether on hospital property or not.

“There was a group of about eight of us.  We were seldom all together at the same time but when there were two or three of us off shift we would go down to Granville Street to a beer parlour and have a glass of beer. We knew it was forbidden but we did it anyway!”

Marriage, too, was strictly forbidden. “I first started training with a friend from school. But when she decided she wanted to get married, she had to drop out because we weren’t allowed to be married while we were training.” Jean knew two other students who instead quietly got married and hoped that the school administration would never find out. The married student in her class managed to make it through to graduation, but a married student from another class was discovered and expelled from the program.

The strict rules around marriage didn’t deter the young nurses from looking for love while still in training.

“There were two roller skating rinks within walking distance of the hospital. If I wasn’t too tired from my nursing duties, I would go and skate. And one night this presentable young man in a naval uniform asked me to skate and I said, ‘I just came in and I’m not sure my skates are fitting properly,’ and he said, ‘I’m strong, I’ll hold you up!’ He got me back to the hospital before my 10 p.m. curfew and asked for another date.”

The pillars on either side of the door to the nurses’ residence on Comox provided just enough shelter for young couples to steal a kiss or two before saying goodnight. “Sometimes Jim and I would be behind one pillar and another couple would be tucked behind the pillar on the other side.”

Toward Jean’s third year at St. Paul’s, Jim was sent to Newfoundland as part of his naval service and the couple kept in touch through letters. Following the end of the war and Jean’s graduation from St. Paul’s, the couple were married in 1946.

Jean continued her nursing career working in a medical clinic alongside Dr. Brock Fahrni, known here at Providence as the namesake of our St. Vincent’s: Brock Fahrni site. She also completed her post-graduate psychiatric nurse training and worked at the Forensic Psychiatry Hospital in Riverview before making the move to home support care in the 1970s.

Now 97, Jean recalls her time at St. Paul’s with fondness: “I grew up a lot while I was there,” she says. “And I made some very good friends.”