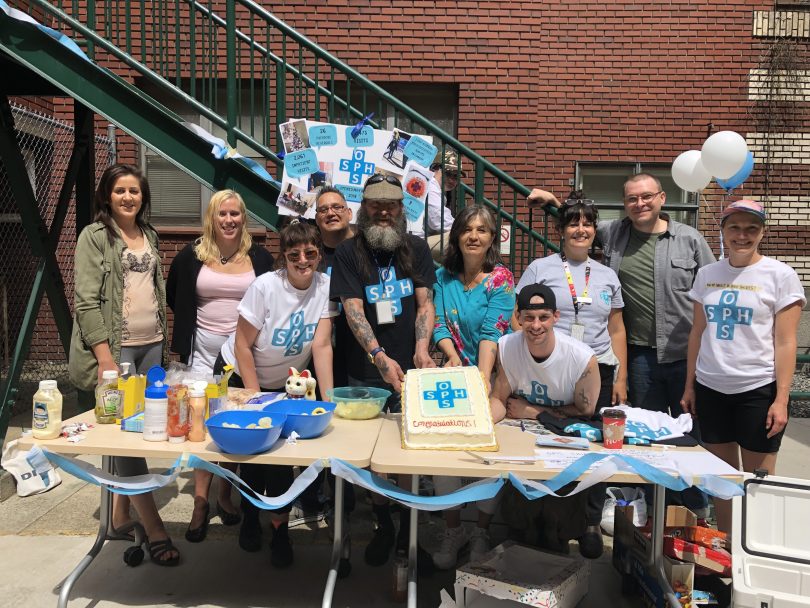 In a courtyard behind St. Paul’s Hospital sits an unassuming white vinyl tent. It’s home to the first peer-led, hospital-associated overdose prevention site (OPS) in Canada and it just celebrated its first birthday.

The statistics are worthy of celebration. More than 10,000 people have visited, and it’s on track to hit 11,000 within a few weeks.

About 150 people stopped by the barbecue to mark the occasion, some as part of their daily routine and some simply to sit, eat, and chat with the people they’ve come to know over the last 14 months.

“The OPS workers have reversed 26 overdoses with naloxone,” says Melissa Nicholson, clinical nurse educator at St. Paul’s who was instrumental in the site’s launch.

Peers like Mouse are key to the success of the OPS

“Peers have been crucial to its success,” says Nicholson. “They’re from the same neighbourhoods as our service users; they’re known to the people who use the tent and it makes the space feel immediately welcoming.”

For people like Will, who has been using the tent for the last nine months, the conversations he’s had with peers while at the OPS prompted his desire for treatment and recovery.

Will, who has been using the OPS for the past nine months, is currently seeking treatment at St. Paul’s Rapid Access Addiction Clinic (RAAC).

“I just stumbled across the OPS one day and have been coming back every day since,” says Will, who was incarcerated for 17 years and, though the crimes have stopped, his cycle of using continues. “It’s such a positive environment here and the staff are so understanding. “

Peers like Mouse, with 38 years of drug use, 10 years of incarceration and 10 years of homelessness, is three weeks away from celebrating eight years clean. He is one of five peers at the OPS and was handpicked by RainCity Housing and Support Society, a not-for-profit that oversees OPS operations, to work at the tent.

Mouse, a Peer Support Worker at the OPS at St. Paul’s Hospital.

“My role is to interact with everyone – of the 10,000 people who have used the tent, I’ve easily talked to 8,000 of them,” Mouse laughs. “When someone comes to the OPS, the conversation always surfaces. Everyone who uses is talking about a way out.”

The OPS has an important social value for visitors

“It’s not just the injection; it’s the social time too,” says Mouse. “We serve about 100 people a day here.”

As a smaller site, the OPS doesn’t have line-ups, so no one is rushed out. “We encourage people to stay and have a chat,” says Mouse. “And because of the reputation the tent has for being that welcoming community space, it’s actually brought a lot of people out of using in their SRO or using alone.”

This is significant, given that the most recent BC Coroner’s Report states that in 2019, 88 per cent of fatal illicit drug overdoses occurred in a private residence.

How the OPS began

It was fall 2016 and a growing number of St. Paul’s patients, friends and families were overdosing in the hospital. Nicholson says that was causing distress among staff, who had nowhere to direct patients to use safely.

“We were giving patients’ roundtrip transit tickets so that they could bus to Insite (a supervised injection site in the Downtown Eastside), and then return back to the hospital to continue their care,” she says.

Wayfinding signage to the OPS in front of St. Paul’s Hospital.