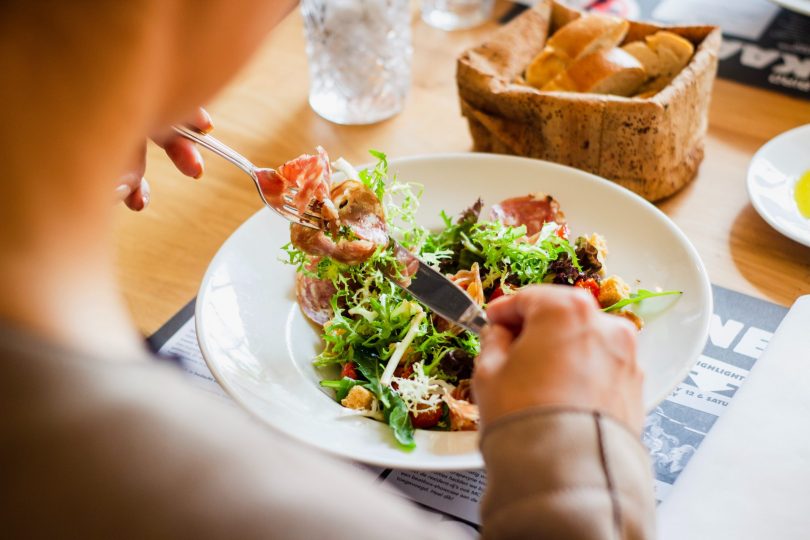 Many diets have come and gone over the years — from Atkin’s and juicing to the 5:2 and 16:8 diets — but how do we know which are actually effective for weight loss?

Published as part of an ongoing collaboration between CHÉOS and researchers at UBC Okanagan, a new study, led by Dr. Jonathan Little, looked into whether a ketogenic diet app with breath acetone biofeedback is better than a calorie-restricted, low-fat diet app for weight loss.

Mobile health apps have been present in the diet market for several years. They provide their users with a convenient and accessible way to manage their food intake and achieve their goals. Ketogenic diets, also known as keto diets, have been gaining popularity as an effective way to support weight loss and improve certain aspects of health. The basic idea is that the dieter consumes foods that contain a lot of healthy fats and protein, but very few carbohydrates. If done successfully, the body will enter ketosis, whereby fat is converted to ketones, which are used for energy instead of carbohydrates.

Keto diets are perhaps not as easy to follow as you may think. To be fully successful, the user needs to have a sound understanding of the macronutrient content of the foods they wish to consume, more simply put, the protein, carbohydrate, and fat contents. To make this easier, keto dieters can use apps, such as Keyto. The Keyto app combines resources that support and encourage a keto diet with a biofeedback device. The biofeedback device allows users to self-monitor their diet and determine their level of ketosis by measuring the level of acetone in their breath, a by-product of the breakdown of ketones.

“We compared the effectiveness of the Keyto app combined with the biofeedback device to the Weight Watchers’ WW app with regard to healthy weight loss and improved metabolic health,” says Dr. Joel Singer, Program Head of Clinical Trials at CHÉOS and co-author of this study. “We selected the Weight Watchers’ WW app as it is an evidence- and science-based weight loss intervention that is very well known around the world.”

The WW app works differently to the Keyto app. It is a calorie-restricted, low-fat diet app that assigns a certain number of points to different foods and drinks. Based on the user’s data, the app calculates the number of daily points that person should not exceed. The app also contains ‘zero-point’ foods, such as apples, eggs, and tofu, which do not count towards the daily point allocation and can be eaten as and when the user wishes. Both the WW and Keyto apps, however, include recipes, a food search option, and a social support function.

The 12-week randomized trial recruited 155 participants in California with overweight/obesity. These participants were randomly split into two groups — one trialing the Keyto app and the other trialing the WW app. Participants using the Keyto app were encouraged to prioritize keto foods (as emphasized by the app) and use the accompanying biofeedback device three times a day to measure their level of ketosis. Participants using the WW app were asked to log their food and beverages in the app, and avoid exceeding their daily point allowance.

Of the 155 participants recruited, 116 completed the study. Both groups of participants lost weight but more so in the keto group; an average of -5.6 kg (-12.35 lbs) versus -2.5 kg (-5.51 lbs) in the WW group. After checking the participants’ weight again at 24 weeks, they confirmed that the weight loss, and increased effectiveness of the Keyto app, was maintained in both groups.

“We know from past studies that ketogenic diets lead to weight loss. What is most intriguing from this trial is that the Keyto program was so effective for weight loss when tested in the real-world with essentially no interaction with study staff and largely during the COVID-19 pandemic,” says Dr. Little.

The study’s secondary goal, measuring the impact of the diets on metabolic and cardiovascular risk markers, indicated that there were greater improvements in some markers of metabolic health in the keto diet group compared with the calorie restricted, low-fat group.

“Our results suggest that a keto diet-based app combined with breath acetone biofeedback is more effective than a calorie-restricted, low-fat app when it comes to losing weight and improving metabolic health,” concluded Dr. Singer. “Going forward, researchers should look at the long-term effectiveness of this dietary intervention and determine exactly how it could benefit the health of different groups of users.”

Kaja Falkenhain was lead author of this paper, which was published in Obesity.

This article was originally published on the CHÉOS News website.