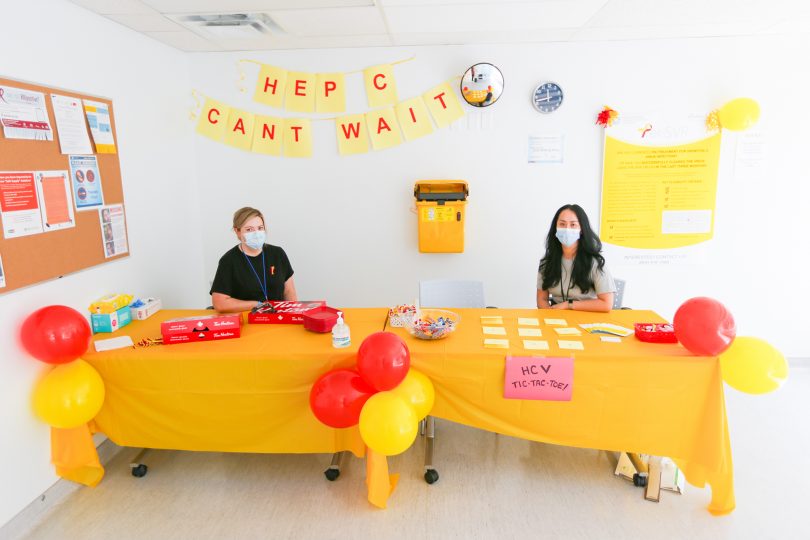 Today is World Hepatitis Day, designed to raise awareness of the global burden of viral hepatitis and to improve care to those living with this liver inflammation.

Treatments have improved but aren’t available to all

Hepatitis C Virus (HCV) treatment has improved considerably, evolving from poorly tolerated interferon-based therapies towards newer curative, oral, direct-acting, antiviral (DAA)-based therapies. The new DAA therapy can achieve cure rates greater than 95 per cent after just 8 to 12 weeks. In BC, treatment is free for all eligible patients with chronic HCV.

Despite these remarkable advances, treatment is not yet universally available. Almost 30,000 people in BC live with untreated HCV. Many have been previously diagnosed but lost to follow-up care, and these people may also experience various forms of social and economic marginalization. People who are living with HIV and HCV may experience unique vulnerabilities. Recent BC-Centre for Excellence in HIV/AIDS findings indicate that women and people living with HIV (PLWH) with a history of injection drug use are less likely to be treated for HCV (vs men and people who don’t use drugs).

Women, those with HIV less likely to receive treatment

BC is committed to achieving the World Health Organization’s target of eliminating hepatitis C by 2030. Health Minister Adrian Dix addressed this goal in Legislature last month, citing the $142.44 million spent in 2019-2020 for medications to treat the virus in British Columbia.

The BC Centre for Excellence in HIV/AIDS (BC-CfE) is internationally recognized as a leader in the fight against HIV/AIDS and related epidemics, including HCV. In 2019, the BC-CfE opened an integrated, low-barrier primary care clinic and research and innovation facility, called the Hope to Health (H2H) Complex, in the heart of Vancouver’s Downtown East side (DTES). It is home to about 18,000 people, and estimates of HCV within the community are as high as 90 per cent. In mid-2020, the BC-CfE launched a safer drug supply program and in October 2020 a Supervised Consumption Site (SCS) within the H2H Complex.

To address these health inequities, a new 12-month pilot project at the H2H complex has been designed to support HCV education, testing, and access to care among people who use drugs in the DTES.  Gaps in testing, linkage to care and treatment uptake for people living with HCV who use drugs represents a considerable impediment to controlling the HCV epidemic in Canada. “Offering these services in a setting designed to prioritize the health and well-being for people who use drugs is an important part of our effort to optimize access to HCV treatment to prevent HCV disease progression and HCV transmission at once,” says Dr. Julio Montaner, Executive Director, and Physician in Chief, at the BCCfE.

Dr. Kate Salters, the newly appointed BC-CfE’s HCV-Treatment as Prevention® (TasP®) Project Coordinator, is leading the BC-CfE’s efforts to control the HCV epidemic among hard-to-reach populations in BC. Dr. Salters is a Research Scientist with the BC-CfE’s Epidemiology and Population Health program and her research focuses on health care engagement and health outcomes among people living with HIV and HCV.

At H2H, Dr. Salters and her team ensure everyone who visits the SCS or is part of the safer drug supply program is offered an HCV test at least once; provide all clients with education about HCV, including steps to reduce risk of acquiring or transmitting HCV; follow-up with all clients through peer and nursing support; and offer treatment to all eligible and interested patients who are diagnosed with HCV on site and support retention and end-of-treatment follow-up through peer and nurse engagement.

Testing and treating for HC is urgent

Often HCV is considered to be less of a priority by health care, compared with more pressing needs like mental health or substance use, but untreated HCV will transition into chronic HCV disease in about 85 per cent of cases, which can in turn lead to liver cancer or cirrhosis.  Efforts to seek, test, treat and retain in care people living with HCV cannot wait.

Dr. Salters notes, “As we have learned over the last 16 months, public health cannot just consider one public health issue at a time. We need public health responses and research that acknowledges convergent and mutually aggravating epidemics and must consider new approaches that prioritize needs of patients and meet them where they are at.”