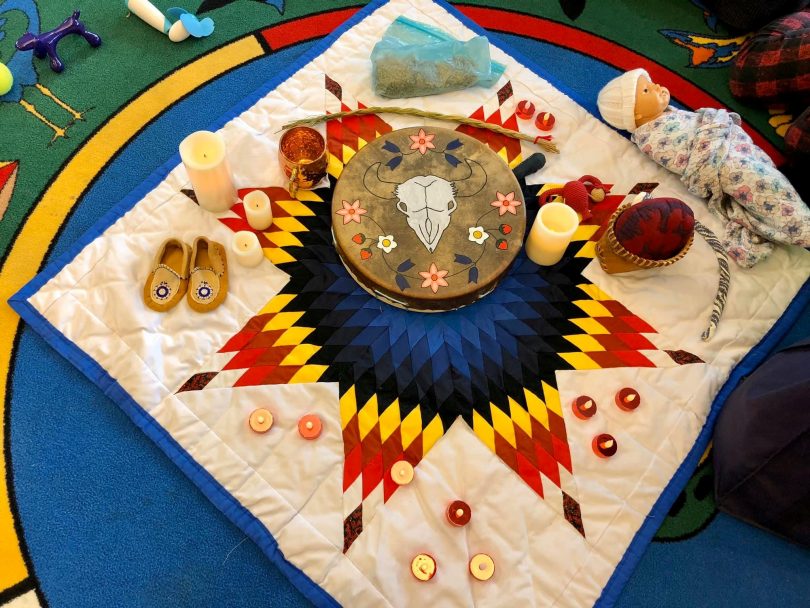 Danette Jubinville’s great-great-grandmother was the last person to practice midwifery in her community before the practice was stopped when an Indian hospital opened in 1938 in nearby Fort Qu’Appelle, Saskatchewan.

“This work being an intergenerational calling is a common thread among the members of our Collective,” explained Jubinville, a member of the Cyr family from the Pasqua First Nation and co-founder and Director of Research and Education for the Ekw’í7tl Indigenous Doula Collective.

Ekw’í7tl, pronounced ah-quay-tull, means family in the Squamish language. This name, gifted to the Collective by a local Elder, represents the group’s goal to deliver culturally grounded prenatal education for Indigenous peoples, by Indigenous peoples.

“The catalyst for getting involved in birthwork was the birth of my daughter and my experience of the lack of culturally relevant care that was available to me. There was also a deeper sense of hopefulness towards reclamation of our culture and our identity,” said Jubinville, who is also a PhD student at SFU focusing on Indigenous reproductive and maternal wellness.

Miranda Kelly, from the Soowahlie First Nation and another member of the collective who now serves as the Director of Indigenous Women and Family Health at Vancouver Coastal Health – Aboriginal Health, was similarly drawn to birthwork after the birth of her two daughters.

“My postpartum experience after having my first daughter was really transformative for me,” she noted. “I felt totally underprepared and that I did not have the right support network in place.”

After gaining access to an Indigenous doula from Ekw’í7tl after her second birth, Kelly began thinking more deeply about what kind of care Indigenous families need during this period, and began her journey in birthwork with the Collective.

“The Collective was launched to provide a community of support for Indigenous birthworkers in Vancouver, recognizing that the historical, social, political, and economic context that our work lies within is different from mainstream birthworkers,” explained Jubinville.

Ekw’í7tl doulas work alongside midwives, doctors, and others to educate and advocate for Indigenous women’s health and gender inclusivity in reproductive health care.

More recently, the group has launched several educational and research initiatives in collaboration with CHÉOS Scientist and Program Head of Knowledge Translation, Dr. Sarah Munro. This university–community partnership was initially supported through a grant from UBC’s Partnership Recognition Fund.

“My role is to facilitate these projects by helping provide access to funding, recommendations around evaluation, and other support,” said Dr. Munro. “Community-based research projects are so much more impactful than other types of research. As university researchers, we need to facilitate and support autonomous decision-making in the community.”

Ekw’í7tl education programs aim to deconstruct mainstream myths and stereotypes about childbirth and to encourage reclamation of Indigenous birth practices.

“Colonial control over Indigenous lands and Indigenous bodies has impacted Indigenous birthing practices,” explained Kelly. “We work to reclaim power back, saying ‘You can make decisions over your body and over your birth.’”

Typically, doulas and other birthworkers work with their clients to support them during pregnancy, birth, and the postpartum period, and operate in a privately funded care model that can exclude families who cannot afford to pay out-of-pocket for services. However, Indigenous practices can be quite different from non-Indigenous ones, explained Jubinville, and the for-profit model doesn’t work for many Indigenous birthworkers.

“Our work depends on each family and what they need,” she said. “This can include making space for the conversation around what spiritual or cultural care they want, and what they envision as part of their birth plan. Do you want an Elder present? Do you want song? What are the first words the baby will hear? In what language?”

But, explained Kelly, it’s not all about things.

“Decolonizing birth doesn’t just happen through having cultural objects in the birth space,” she said. “It’s also about how we approach birth. It doesn’t have to look exactly the way your ancestors birthed for it to be traditional.”

These programs are designed to honour the diverse needs and traditions of Indigenous peoples and resist pan-Indigenizing the curricula, while recognizing the parallels between Nations.

“The way that Indigenous birth looks and is defined is by each person; each birth looks different,” added Kelly. “Our work is about opening up possibilities to people and leaving it up to them. We support birthers to choose what is meaningful for them.”

The group first piloted their doula training program in Port Hardy in 2019, with funding through the First Nations Health Authority.

Then, in 2021, Ekw’í7tl piloted their prenatal education program in the same community. The program aims to initiate a conversation around birth support in communities, while also offering information about physiology, medical interventions, and other options.

“We had Elders and Knowledge Keepers from the community present to share their local knowledge,” explained Kelly. “This program is also a community-building project by reigniting the dialogue about birth. People would say ‘Oh yeah, I remember this but haven’t had a conversation around it for a while.’”

Having adapted their courses based on learnings from the pilot projects, the group is now offering the prenatal course in Vancouver, supported through funding from the Vancouver Foundation Gender Equity Fund.

“The context in an urban setting like Vancouver is quite different, since people join us from many different Indigenous cultural backgrounds,” said Kelly. “It’s not better or worse, just different.”

The team is working to condense and streamline the prenatal course materials with the aim of offering a six-week course and a “Prenatal-in-a-Day” option.

The group, co-led with Dr. Munro, has also recently secured CIHR project grant funding for a family planning storytelling project, which aims to understand Indigenous peoples’ experiences with existing services to plan, space, and support pregnancies. The project ultimately strives to contribute to the development of services that meet the needs of Indigenous peoples and communities.

But Jubinville and Kelly mentioned groups like Ekw’í7tl need more than grant funding to achieve their goals — they need long-term health system investments in Indigenous-led doula and midwifery care to establish such programs and services as regular offerings through health authorities in the Lower Mainland and elsewhere in the province.

Through decolonizing approaches like those practiced by Ekw’í7tl, and broader principles of Indigenous wellness, Jubinville and Kelly strive to create a better world for their children, and for future generations.

“If culture hasn’t been present in people’s lives, birth can sometimes be a place for reclaiming culture across multiple generations,” said Jubinville.

“That’s the beautiful thing about birth; it keeps happening with each generation,” added Kelly. “Even though there is a sense of loss from the traditional Indigenous midwives we never got to sit with and learn from, birth is still happening around us and there’s knowledge to reclaim from each new birth experience.”