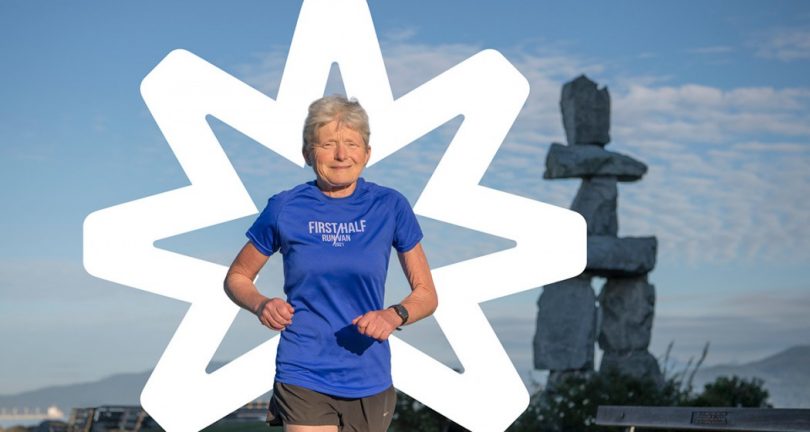 Imagine being told the only solution for your pain is to give up all the things you love? That’s what happened to Janet Green. She had fallen while running and landed hard on her outstretched arm. “I would have been better off landing on my face like I did at the Boston Marathon in 2011,” she says dryly. Because for the next four years, the painful injury put the kibosh on almost everything that brought her joy.

In her three decades as a family doctor in the Comox Valley, Dr. Janet Green delivered more than 1,500 babies. But her on-going shoulder issues meant she had to stop this exceptionally rewarding part of her practice.

It also put a damper on her other passions: skiing and especially running. Janet has run more marathons than any other Canadian woman. She has more than 400,000 kilometers under her shoelaces including 414 marathons and 38 ultramarathons. She’s part of an prestigious group of athletes who have completed marathons on all seven continents. Her Antarctica run consisted of 426 laps on the deck of a ship!

In her search for relief, she saw specialists, went for treatments, and had three operations, including a full shoulder replacement. But the pain didn’t go away. In fact, it got worse. Incredibly, even with her knowledge as a physician, her insistence that something was wrong was dismissed by almost everyone.

“It’s an unfortunate and ageist fact that when you’re a runner and you complain about pain, you’re told ‘it’s your age.’ I was an elite athlete. I knew my pain wasn’t from running. You don’t run with your shoulder.”

Frustrated and with her patience at an end, she reached out to her classmates from medical school at Queen’s University. With their recommendations, she began exploring options in Alberta, Ontario, Colorado, and even the Mayo Clinic in Minnesota. And she started saving. “I was so desperate, I would have gone anywhere,” she says. But then the pandemic began, travel was out, and she needed an solution close to home.

After six long months pleading for a referral, she got an appointment with Dr. Mark Cresswell, an interventional radiologist at St. Paul’s Hospital and, by definition, a problem solver.

Cresswell looked at the images of Janet’s shoulder – and he listened to her description of the pain. “Mark was the first person who believed me when I said my pain was not caused by running,” says Janet.

They were right: it wasn’t from running – or age. Cresswell immediately suspected that one of the four screws used in the replacement had likely been mispositioned causing it to irritate the adjacent muscle. Shoulder replacement is a very technical procedure that requires exacting precision. Misalignments are extremely rare, but when they happen, they can lead to chronic pain.

For Janet, it was an ah-ha moment: a misplaced screw would explain why her pain worsened almost immediately after the operation.

Cresswell referred Janet to his colleague Dr. Jeff Pike, a renowned orthopedic surgeon at St. Paul’s Hospital. Janet’s confidence soared when her classmates gave Pike a rousing endorsement and she learned he had trained with Canada’s ‘shoulder guru.’

Sure enough, within 48 hours of her surgery with Dr. Pike, the pain was gone and she knew the shoulder was fixed.

Looking back, Janet is especially grateful for the way the entire team “bent over backwards” to accommodate her work schedule and streamline her pre- and post-operative care. “St. Paul’s is truly amazing,” she says.

In a world-class facility, with skilled and compassionate caregivers like Dr. Cresswell and Dr. Pike, and the support of grateful patients like Janet, many more people will get their lives back so they can ski, and run, and maybe even deliver babies.

“I thought I was going to have to live in pain for the rest of my life. I’m so grateful and so happy to give back.”