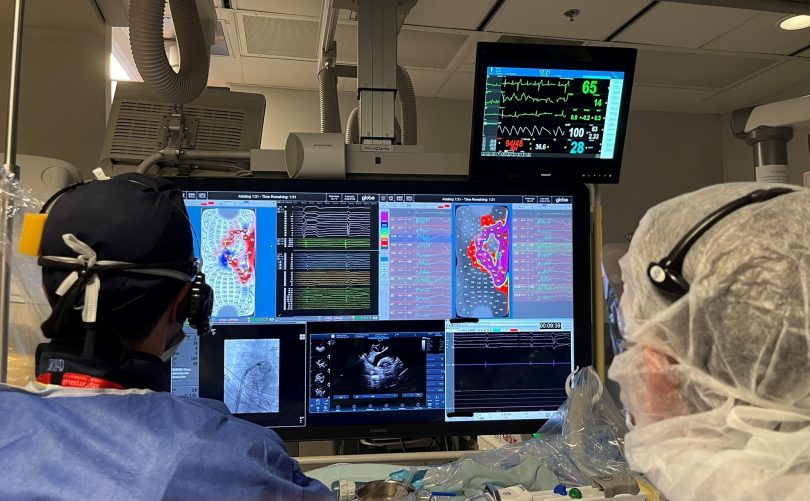 A device that treats atrial fibrillation – the world’s most common heart rhythm disorder – is being used in a clinical trial at St. Paul’s Hospital.

Dr. Marc Deyell, Director of Heart Rhythm Research and the Electrophysiology Laboratory at St. Paul’s Hospital, is leading the study. His team is investigating a clinical procedure using a device called the Globe Mapping and Ablation System to navigate inside the heart and diagnose where the rhythm disturbances occur. Once identified, the same device can deliver immediate treatment to restore the normal heart rhythm and confirm successful treatment.

The technology was developed by Kardium, a Vancouver-based medical solutions company.

What is atrial fibrillation?

Atrial fibrillation (also known as Afib or AF) is a type of irregular heart rhythm (arrhythmia). Arrhythmias are due to electrical signal disturbances of the heart. AF is the most common arrhythmia, affecting approximately 200,000 Canadians, according to Heart and Stroke. The risk of developing AF increases with age and with other risk factors such as diabetes, high blood pressure and underlying heart disease. The main complications are stroke and heart failure.

“Atrial fibrillation can severely impact quality of life for patients, and physicians are always seeking out the best tools to treat this disorder,” Dr. Deyell said in an announcement released by Kardium. “The Globe System allows me to quickly map and diagnose the electrical disturbances in the heart and then rapidly treat them, all with the same system.”

The Globe System is designed for high-definition mapping and atrial ablation. The technology consists of a catheter with 122 electrodes that provides rapid, single-shot pulmonary vein isolation (PVI) and the ability to quickly confirm PV isolation during ablation.

“Partnerships between clinician-researchers and the technology sector can accelerate innovation and advancements in patient care. As a Vancouver-based company, we are delighted to be working with Dr. Deyell at St. Paul’s Hospital – home of the provincial Heart Centre – and the Centre for Cardiovascular Innovation at the University of British Columbia to conduct this study with the Globe System right here in BC,” said Kevin Chaplin, CEO of Kardium, in the company announcement. “Since our successful commercial launch of the Globe System in Europe, our goal has been to make the technology available in North America.”

This story was adapted from a Kardium news release, which you can read here.