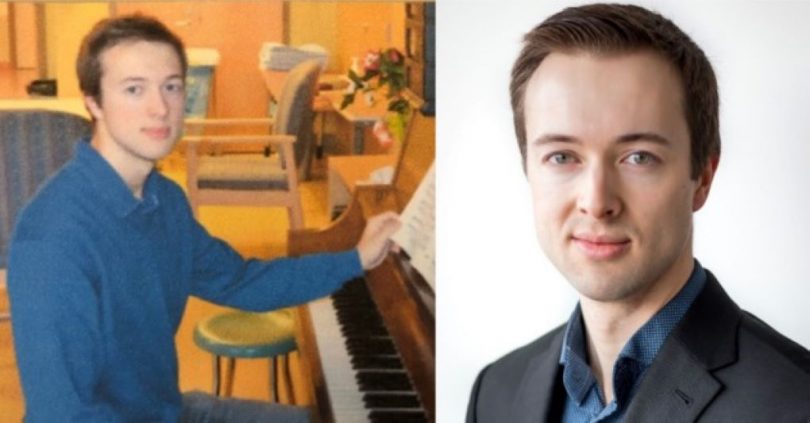 Toby Schmitt in 2014 playing the piano at Mount Saint Joseph Hospital, and now in 2022, as a pathology resident.

National Volunteer Week runs April 24-30. Providence Health Care has a strong contingent of volunteers who generously give of their time and talents helping patients and residents across its sites.

Here is one story.

In 2012, Toby Schmitt was a second-year pharmacy student at the University of British Columbia when he decided to volunteer at Providence Health Care’s Mount Saint Joseph Hospital.

Ten years later, now Dr. Schmitt is at Mount Saint Joseph, but this time he’s there to complete a portion of his residency in pathology.

Ironically, as a resident he is using equipment purchased with funds raised by volunteers.

Back then, he was interested in science and medicine, but he also wanted a taste of what it was like to work in a hospital setting.

Fortunately for the residents of the Geriatric Psychiatry Unit at Mount Saint Joseph, Dr. Schmitt brought his talent for playing and teaching piano. He began volunteering by performing weekly concerts for residents, taking requests that ranged from World War II songs to Christmas carols.

Mary Gallop, Mount Saint Joseph Coordinator of Volunteer Resources, speaks fondly of the doctor, saying, “His impact on both staff and residents was incredible.”

Volunteers like Dr. Schmitt are responsible for many things, from hairdressing and piano playing, to the smooth operation of the hospital gift shops, which are a source of fundraising revenue.

Last year hospital gift shop volunteers contributed $20,000 of funds raised to the purchase of a digital cassette printer for the hospital.

The device houses tissue specimens for pathologists to analyze for disease.

Not long after this specialty printer was put into action, Gallop says, “I ran into Toby just randomly last year outside the hospital cafeteria when he was here for a residency.”

She was happy to see how Dr. Schmitt was doing in his schooling, and the reunion was all the sweeter when he told her he was going to be trained on the cassette printer.

“It’s a tool purchased because of the endless hours (hospital) gift shop volunteers had generously shared.”

His volunteer work helped him in medicine

While, as a pathology resident, Dr. Schmitt doesn’t interact directly with patients, he credits his time spent as a volunteer with helping to shape his empathy skills.  “Volunteering has helped me to appreciate the clinical and patient context which is vital to my work.”

Now, he has the unique opportunity to see the role of a volunteer through a new lens, adding, “as a resident, I’ve struggled with moving between different hospitals; volunteers at the information centers have really made a difference in orienting me to new facilities.”

Volunteers generously give their time and energy to serve patients, families and residents as they receive health care, and sometimes this empathetic nature is what makes them best suited to become health-care providers themselves.