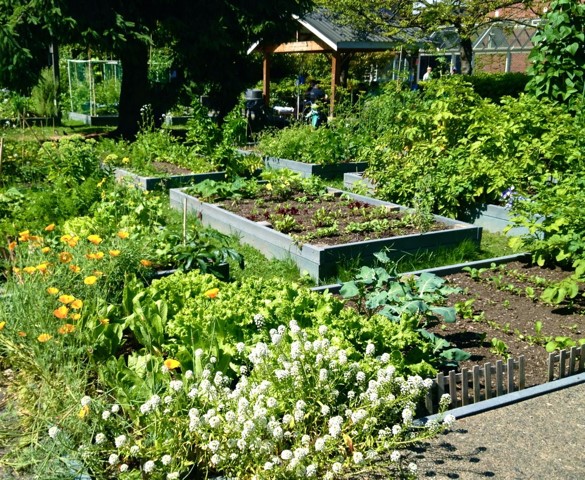 St. Paul’s Hospital fourth floor garden in all of its pre-pandemic glory.

With the garden opened in 2010, the now society president has seen it through many seasons, but none quite like those brought by the COVID-19 pandemic which saw gardening come to a halt.

Sara Parmar, volunteer resource coordinator for St. Paul’s Hospital, speaks fondly of the long-time partnership with DIGS saying “we love working with them and we’re excited to welcome them back to the garden.”

DIGS is the result of an idea born from gardening writer and advocate David Tracey, and a collaboration between the Robert E. Lee YMCA, Gordon Neighbourhood House, West End Residents Association, City of Vancouver and WelcomeBC.

“The vision was to create a community garden representative of the downtown population; bringing together immigrants and Canadian-born gardeners in a respectful intercultural setting,” says Chang.

“We conducted mandatory workshops on anti-racism, anti-sexism, anti-homophobia, intercultural communication, conflict resolution and civic governance before we ever touched soil.”

An oasis in the downtown core

In May 2010, a partnership was struck between DIGS and Providence Health Care. DIGS would begin the process of revitalizing the 148 unused garden boxes on the St. Paul’s rooftop terrace.

Chang remembers, “We brought up our first truckload of fresh compost in May, hauled up 20,000 pounds of soil, cleaned all the hanging boxes and filled them, and built a new set of ground plots.”

“We’ve been growing vegetables there ever since.”

The garden has the original 148 rail boxes as well as 28 ground plots. In pre-pandemic times, they were filled with numerous vegetables and flowers. There was everything from kale, beans and squash, to bok choy, snap peas and shiso, a Japanese herb from the mint family.

The variety is by design, says Chang. “Part of the intercultural aspect of DIGS is that we have gardeners from many different cultures who grow different things, which means we can all learn from each other.”

Some busy workers joined the team

In 2017 DIGS added some tinier team members with the introduction of the Observational Beekeeping Project.

“We received funding from the City of Vancouver, and approval from St. Paul’s, to build the enclosure and buy the equipment,” says Chang.

Two active honeybee colonies were unveiled in 2018. With five beekeepers already on the DIGS team, and gardeners with an interest in learning the trade, the project was off to a strong start.

Prior to the COVID-19 pandemic, DIGS gardeners could tend to their plots freely. There was a work party every spring to bring in fresh soil, and a harvest feast every fall with food grown from the gardens.

Then “COVID completely shut down access to the community garden,” says Chang.

The gardeners, for the health and safety of themselves, and the patients and staff at St. Paul’s, could not access the garden for over two years. The beehives had to be relocated to an area open to the public during the pandemic.

“Before the pandemic we had 55 active DIGS members, now we have 15.”

The garden will bloom again

The seasons have changed and the DIGS gardeners are slowly but surely returning to the rooftop.

“This summer we’re going to have 15 gardeners to bring things back to life, to clean up after two years of neglect and get some vegetables growing again,” says Chang.

The garden is looking a little wild and overgrown, and it will take some time to get it back to its functional state.

Parmar adds, “They have started coming on site as things are opening up, and we’re looking forward to all of the beautiful garden plots and hopefully, to welcoming back our bees in the near future.”

Chang, despite the challenges of the past two years, is hopeful for the future, “DIGS has been a rewarding project, so I plan to continue serving for the foreseeable, hopefully even at the new St. Paul’s Hospital,” adding, “I’ve looked at the renderings of the new buildings and I see some choice rooftop spaces!”

Interested in volunteering in the garden at St. Paul’s Hospital? ­­­­Visit the Providence Health Care Volunteer Resources webpage for more information on how to become a volunteer.