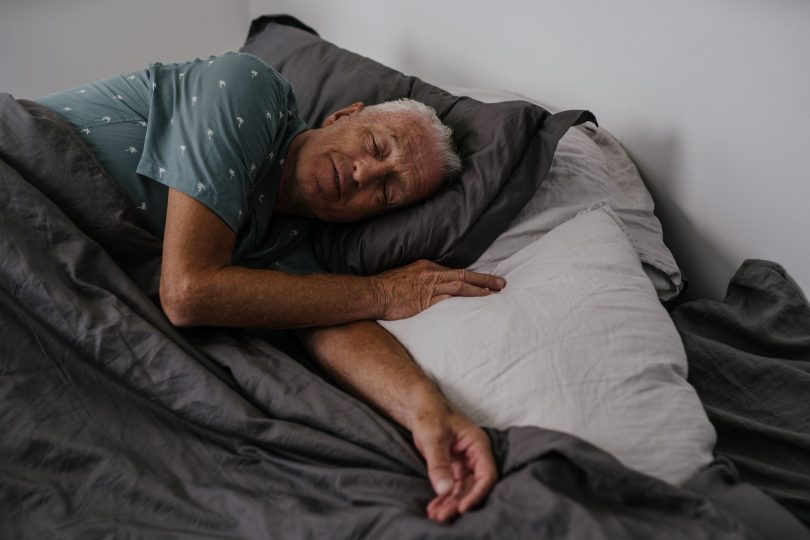 About a billion people across the globe have sleep apnea, a disorder in which people stop breathing mid-sleep.

Some people wake up 15 times an hour

“It is extremely common,” says Dr. Najib Ayas, a CHÉOS Scientist and Associate Professor of Medicine at UBC. “Of those, around 425 million are thought to have moderate-to-severe disease.” These people wake up at least 15 times an hour throughout the night due to their apneas.

Muscles at back of throat collapse and close the airways

When we fall asleep, our whole body relaxes, including the muscles at the back of the throat. For someone with sleep apnea, these muscles collapse, closing the airway, which causes the person to self-asphyxiate throughout the night. This typically results in them waking up to re-establish upper airway patency and resume normal breathing.

Waking up on the wrong side of the bed

There are many consequences of sleep apnea. Short term, it can cause daytime sleepiness, reduced vigilance, reduced quality of life, and increased risk of motor vehicle accidents and occupational injuries. Long term, there are many potential health implications.

“Patients with sleep apnea experience intermittent hypoxia, whereby oxygen levels go down when the airway closes and back up when the person awakes, which in turn activates oxidative stress, inflammation, and the sympathetic nervous system,” explains Dr. Ayas.

From heart disease to dementia

“Research has found that these factors, alongside other physiological effects associated with sleep apnea, like increased blood pressure, may contribute to a higher chance of developing cardiovascular diseases, including hypertension, cardiac arrest, and stroke, as well as neurodegenerative diseases such as dementia.”

While we are aware that cardiovascular and neurodegenerative diseases are more likely among sleep apnea patients, it is hard to know precisely who is at high risk. Identifying these individuals could allow physicians to intervene earlier, be more aggressive in their sleep apnea therapy, and try to mitigate the risk of long-term health complications.

Time to hit the hay

At present, people with suspected sleep apnea undergo sleep studies, also known as polysomnograms, to confirm their diagnosis and the severity of disease. During the sleep study, patients spend a night in a laboratory where brain waves, oxygen levels, heart rate, and more are measured. “We collect a huge amount of physiologic information during these studies. However, we only use a small part of it for clinical decision-making. For example, we tend to focus on the apnea hypopnea index, which is the number of times the airway narrows per hour of sleep, but do not consider other potentially useful prognostic factors such as the physiologic response to these events,” says Dr. Ayas. “Of note, the apnea hypopnea index does not correlate well with the potential health complications of sleep apnea.”

In an ongoing longitudinal cross-Canada study of 2,000 people with sleep apnea, Dr. Ayas and his team are looking closer at the disease and aim to identify possible risk factors for health complications through combining sleep studies with omics research.

“We are leveraging the information collected during participants’ sleep studies to get a better understanding of future health risks. For example, the continuous electroencephalogram (EEG) data could be analyzed more closely to identify indicators of cognitive impairment, and electrocardiogram (ECG) and oxygen level data could be studied to identify indicators of cardiovascular disease risk,” he said.

Once all these details are collected, Dr. Ayas and his team will apply artificial intelligence and machine learning techniques to extract and examine more comprehensive information about the participants’ condition and potential health trajectories.

Bolstering these data, they are also conducting whole genome sequencing to identify markers that predict the risk of certain diseases. Markers are different molecules present throughout the body that indicate what may be going on now and what could happen in the future. They can be found in DNA, blood, and urine samples.

“In addition to detailed sleep study data, genetic, epigenetic, metabolic, and protein markers may help identify individuals at higher risk of health complications,” explains Dr. Ayas. “For instance, if we felt that sleep apnea was at least partially causing complications like cardiovascular disease due to increased inflammation, we would expect that markers of inflammation would be highly predictive of these outcomes.”

In short, the data gathered from sleep studies and genome sequencing will be compared side by side, enabling the researchers to paint a detailed picture of each participant’s health and comorbidity risk factors.

“We are trying to shift towards a precision-based approach to sleep medicine so that we can support and treat anyone who is likely to develop comorbidities as early as possible,” he said. “This research is a huge step in helping us achieve this and improve long-term health outcomes for all patients with sleep apnea.”

Click here to learn more about the signs and symptoms of sleep apnea and current management options.