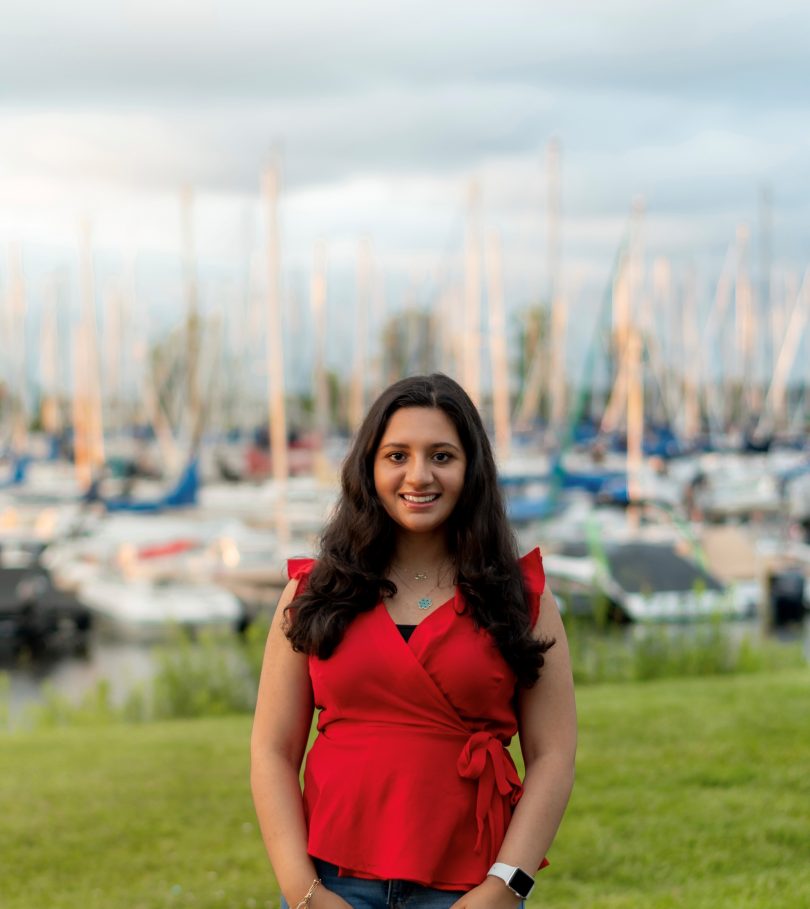 Zobaida Al-Baldawi was born with a genetic mutation passed on from both her parents. It causes her to have dangerously high cholesterol levels.

It might not seem so on some days, but Zobaida Al-Baldawi is one of the lucky ones.

She received a diagnosis of an inherited high-cholesterol condition, Familial Hypercholesterolemia (FH), when she was just 13.

That early diagnosis happened after her physician father saw a fatty deposit on her knee years ago and had her get it checked.

As a result, the 24-year-old has received close monitoring for symptoms, along with therapies to manage the serious condition.

A common but poorly diagnosed disease

Although FH is the most common genetic disease in the world (affecting one in 300 people, with a 50:50 chance of inheriting it if a parent has it), it is 90-per-cent underdiagnosed, says Dr. Liam Brunham, the lead at St. Paul’s Hospital’s Healthy Heart Program Prevention Clinic.

Often, people discover they have it only when something serious happens, like a heart attack or stroke. Al-Baldawi’s father found he had FH after suffering a heart attack in his mid-40s.

To increase awareness of the incurable condition, St. Paul’s is hosting an open house on September 24 for those with FH and their relatives – the first such event since COVID.

This year, the focus is on women with FH. Al-Baldawi is one of the speakers who will share her story.

“We have learned that women are diagnosed later than men for this, and less intensively than men,” says Dr. Brunham, also a Principal Investigator with the Centre for Heart Lung Innovation at St. Paul’s.

Specific challenges for women with FH

Women may also face challenges during their reproductive years because of the fears of using cholesterol-lowering drugs during pregnancy. Because women may spend years either trying to get pregnant, being pregnant, or breastfeeding, they could potentially spend years without treatments, he says.

Al-Baldawi, a medical student in Ontario, admits her condition makes her think twice about having kids. “Pregnancy is stressful on the body and my health is a consideration.”

Cholesterol typically rises by about 30 per cent in any woman’s pregnancy, so she would need to be extra careful.

Something else weighing against her is that she has a rare form of the disease, called Homozygous FH. That means both parents carry the genetic mutation. Its incidence is one in one million. An October 2021 Canadian Journal of Cardiology paper reported just 79 cases in Canada. The more common form, in which a person inherits the mutation from just one parent, is Heterozygous FH.

Al-Baldawi takes statins and other medications for her symptoms. She also undergoes plasma apheresis treatments every two weeks. This in-hospital treatment separates blood and plasma. The plasma is discarded and replaced with a substitution fluid. The procedure is invasive and time-consuming, she says.

While she has good and bad days, she remains optimistic about a future living with FH. She watches her mother and father work and lead normal lives.

More broadly, a database launched in BC in 2013 the BC Familial Hypercholesterolemia Registry, is now pan Canadian. It helps researchers like Dr. Brunham improve ways to identify patients so they can be monitored and given the best treatments if necessary. The Canadian registry now contains the names of 5000 FH patients, with 2000 from BC.

That is encouraging to Al-Baldawi. “There are a lot of centres in Canada doing cutting edge research into this. There are new medications out there and I am eager to get on them as soon as possible.