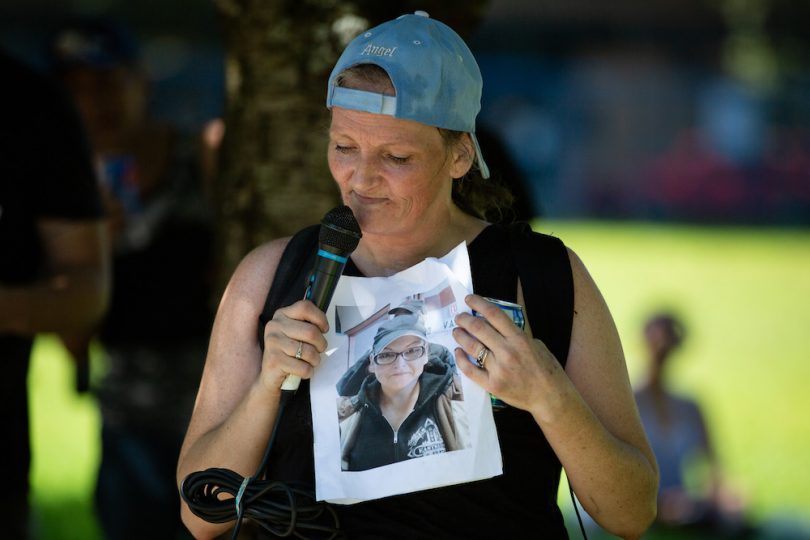 This article is dedicated to Chereece Keewatin, a member of the BC Association of People on Opioid Maintenance, an overdose prevention site supervisor, and a participant in this research project. Chereece died in February 2019 as a result of drug poisoning. This story was originally published on the CHÉOS website Sept. 15, 2022.

Laura Shaver sits in her office at VANDU, the Vancouver Area Network of Drug Users, with a collage of pictures tacked to the wall behind her, memorializing friends and family who have died due to drug poisoning. And Shaver, who has been on methadone for the past 23 years, feels lucky to not be another picture on somebody’s wall.

Her dire outlook is not unfounded. More than 8,700 British Columbians have died since the province declared a public health emergency in 2016 in response to the rise in drug overdoses and deaths. What’s more, the rate of overdose deaths has steadily increased, nearly doubling from 2016 to 2021. The COVID-19 pandemic has added more fuel to the fire. Average monthly overdose deaths more than doubled after COVID-19–related restrictions were initiated in March 2020 compared with the previous year.

While Shaver is just one of over 73,000 British Columbians diagnosed with opioid use disorder (OUD) and accessed opioid agonist therapy (OAT) in the past two and a half decades, she works tirelessly to push clinicians and policy-makers to address the crises.

Not just a number

“I hate being a number, my name is Laura,” she says. “When you take the number away and add a name, it starts to become more real.”

One of the ways she has brought reality to the forefront is through her work on the editorial board and as a frequent voice of Crackdown, an award-winning podcast led by the community, which tells the stories of those on the front lines of the crisis.

“Drug use has been here since the beginning of time; it’s not going away. Either the health system will adapt, or we will do it ourselves,” she said.

A role in research as co-author and participant

She also sees research as a way to make change and spur adaptation. She has been involved in research both as a co-author and participant. Most recently, she took part in a study with a team of CHÉOS researchers, led by Dr. Bohdan Nosyk, in a project to develop a series of metrics that can be used to understand where the health system is failing to support people who use drugs, and identify glimmers of hope.

Laura’s day job is as OAT/iOAT peer advocacy navigator lead with the BC Centre on Substance Use (BCCSU) and Providence Health Care (PHC), where she helps people navigate the health system and advocates for accessible and equitable pathways to care. This expertise made her a vital participant in Dr. Nosyk’s workshop, the culmination of a project to develop a series of health system performance measures for OUD.

“Essentially, these are metrics that make a judgement about how well a system is responding in one particular aspect of care delivery,” explains Dr. Nosyk.

The project originally set out to develop a cascade of care, which is a framework that allows service providers and policy-makers to measure progress towards improving engagement and retention in OUD treatment.

Many people may be familiar with the concept of a cascade of care, especially those involved in HIV, where the United Nation’s 90-90-90 targets are used to highlight the successes and failures of governments around the world in addressing the HIV epidemic.

But like any attempt to simplify a complex situation, relying on a cascade of care approach alone can mean we overlook important details and nuances that are important to understanding what’s really going on, and how to make improvements.

“We would be obscuring all this other info we have at our disposal,” says Dr. Nosyk. “The other information starts to explain and disentangle and fill out our understanding of what happens to people at different stages of care.”

So, the project was expanded to include other measurements. After reviewing the available scientific literature and consulting with health care providers, policy-makers, and experts who manage the provincial health databases, the team proposed 102 metrics that could be used to guide policy and care decisions. Along with treatment cascade measurements, these included information on health care utilization, metrics to understand whether clinicians are adhering to provincial OUD treatment guidelines, and details about how well different parts of the health system integrate to provide complete care for each person.

Using provincial and health authority databases covering 1996 to 2017, each metric was then ranked based on its ability to accurately predict whether a person would die or be admitted to the emergency department within six months of the measurement being taken.

A wealth of data, but what does it mean?

The intention of these performance measures is to provide a basis for data-informed public health efforts. But without context, these measures run the risk of misrepresenting the situation and obscuring what needs to be done to fix the problem.

To assess the validity of these measures in the real world, Dr. Nosyk and his team again collaborated with clinicians, policy-makers, and people with lived experience of OUD, like Laura, to generate feedback.

Nearly 50 clinicians and policy-makers were asked to review each measure and assess whether they reflected what they intend to measure and whether relying on them might cause unintended consequences. Laura and 10 other peers at VANDU participated in a focus group discussion to provide insight into what aspects of care should be measured and other important factors to consider. With this feedback in hand, participants then gave each measure an endorsement rating. In the end, 37 measures received a strong endorsement, including nine of 13 cascade of care measures.

“The nice thing about these performance measures is that once they are developed, they allow us to dissect specific areas and break them into smaller pieces to isolate where problems are happening,” explained Dr. Nosyk.

And the data generated over the course of this two-part study revealed several very clear problems.

One of the most significant issues identified by Dr. Nosyk and his team is a decline in retention in OAT, whether methadone, buprenorphine, or injectables.

“We have 25 years’ worth of data and we are now seeing a steady, 12-year decline in OAT retention. That’s a big problem.”

For Shaver, the reasons behind this decline came bursting out before the question was finished: stigma and lack of choice. She cites daily urine drug testing, a required prerequisite for obtaining OAT, as a significant source of stigma and a barrier to care.

“Who wants to stand in front of someone when they’re dopesick — vomiting, sweating, diarrhea — go into a bathroom and have someone watching you pee with a heat sensor on the cup to make sure it’s your urine?” she asked. “It’s the epitome of paternalism,” adds Dr. Nosyk.

She also says many OAT clinics do not offer a range of medication options and people can’t necessarily get the treatments that work best for them. Dr. Nosyk corroborated that this lack of choice affects declining retention rates, a current example being the widespread switch from methadone to Suboxone, a combination of buprenorphine and naloxone. The reasoning behind this policy involves its improved safety profile in terms of overdose risk, milder side-effect profile, and increased flexibility for take home dosing schedules in comparison to methadone.

Unfortunately, a paper published last year by Dr. Nosyk’s team showed that buprenorphine is about half as good as methadone at retaining people. More work is underway to better understand this gap.

“We’ve shown that the majority of people with diagnosed OUD have engaged with OAT — 70–80 per cent have tried treatment — but the challenge is long-term retention,” explained Micah Piske, an epidemiologist at CHÉOS and co-author on this set of papers. “From our perspective, it’s not just about getting people in to treatment, but making sure they stay engaged, so eliminating those barriers and things that stand in the way of them getting care. This includes things like having to go to a pharmacy every day to get a prescription, daily witnessed doses, and urine drug screening.”

The second issue affecting retention, said Dr. Nosyk, is that medication doses have not kept up with the more potent and toxic drug supply.

“OAT is about eliminating withdrawal and the need to go out and get more drugs. If the medication is no longer doing that then retention will decline,” he said. “I think we’ve been a little slow to react to that.”

Dr. Nosyk and his team also found that over half of people with OUD were readmitted to the emergency department within 30 days after being discharged, a 50-per-cent readmission rate.

“That is just staggering,” he says. “It’s one of those numbers — and there are a few — where you’re almost in disbelief, you have to check it again to make sure that it’s right.”

Along with the finding that 80 per cent of people in this analysis live with a mental health disorder, this finding highlights the need for improved discharge planning and linkage to support services, says Piske.

This complexity is part of the reason that Laura and her colleagues have consistently advocated for improvements in the continuum of care through wrap-around services, where social workers, mental health experts, dietitians, and housing services are made available alongside doctors, nurses, and pharmacists.

How data can empower change

Piske notes that it’s important to recognize that this work only looks at a small portion of the population who are at risk of overdose.

“We’re just looking at people with diagnosed OUD and people in that subset who are accessing or have accessed OAT,” she said.

But, with these refined performance measures and the addition of new data, decision-makers can start to see how the population is changing and understand where demand calls for more resources.

“Whenever we get new data, we are inundated with requests,” says Dr. Nosyk. “Everything you see in these papers that we’ve done provincially, we have also done by health authority and health service areas. Once you start digging into smaller geographic areas and specific patient profiles you start to see a different picture come to light.”

Given the constant demand for analyses like this, the team has made these performance measures and data publicly available via an interactive web portal.

Dr. Nosyk and his team are also able to use the data to inform clinical guidelines and practice.

“Out of this big dataset, we can emulate clinical trials using advanced statistical methods to investigate the value of current clinical practices,” he says. “There are a lot of small clinical questions for which there were very limited data available, but now we can use our data to answer them — that’s exciting.”

They are also applying their skills to a new project that will test the effectiveness and cost-effectiveness of an expanded peer support program to promote OAT retention and reduce the risk of overdose death.

A piece in the puzzle

“Incremental improvements in the quality of service delivery will most certainly be counted in lives saved,” Dr. Nosyk and his team wrote in the conclusion of their paper.

Shaver’s life was saved by methadone, but not without her own tireless advocacy, and a little luck. Now, she can use her experience to help others.

When asked why it’s important for people like her to get involved with research, her answer is unequivocal: “Because I know it, because I’ve lived it. It’s not just a job to me. If I don’t do this, I’ll die, and so will hundreds of other people.”

Despite her years of experience navigating care as a person with lived experience of drug use, she is used to the system’s constraints on her day-to-day life. She ends our interview early as she races to the pharmacy before it closes for the day so she can pick up her daily medication.