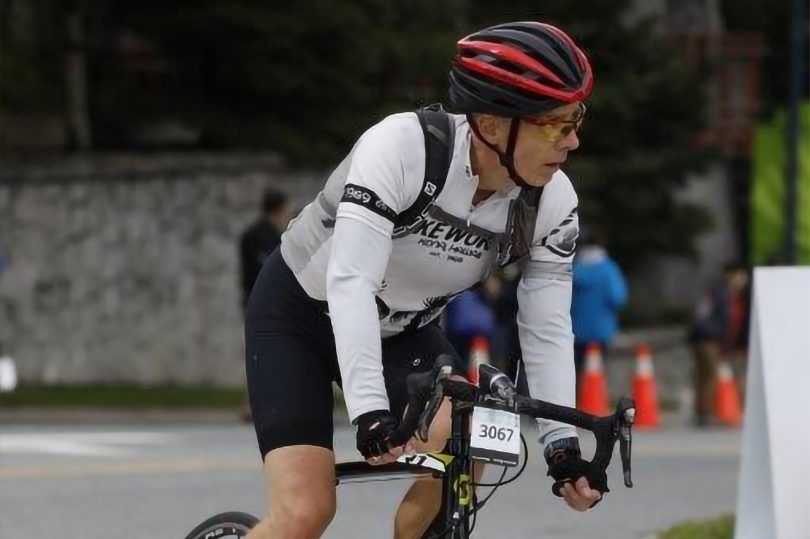 Richard Atkins was cycling in the Gran Fondo when he suddenly went into cardiac arrest.

October is Sudden Cardiac Arrest Awareness Month. Some 45,000 Canadians go into cardiac arrest outside the hospital setting each year.

In 2019, Richard Atkins was probably in the best shape of his life. He had been training for months for the Whistler Gran Fondo, a 122-kilometre cycling race from Vancouver to Whistler held in September.

But on race day, as he began the steep ascent up Taylor Way in West Vancouver, he felt like he was going to faint.

Defibrillation “to restart my heart”

Next thing he knew, he was off his bike and sitting on the road.

“It felt like a dream. There were people bustling around me, calling an ambulance, administering CPR,” says Atkins. “I woke up in an ambulance. The paramedics had just administered a second round of defibrillation to restart my heart.”

Atkins had experienced a sudden cardiac arrest (SCA), a condition that occurs when the heart’s electrical system malfunctions. This disrupts the heart’s pumping action and stops blood flow to the rest of the body. He was one of approximately 45,000 Canadians a year who experience an out-of-hospital SCA.

Problems with the heart’s electrical system

A sudden cardiac arrest isn’t the same as a heart attack, when blood flow to a part of the heart is blocked. Unlike heart attacks which are often linked to modifiable lifestyle factors, most people who experience SCA had no idea they were at risk.

“One in 1000 Canadians have a sudden cardiac arrest every year, and 90 per cent of them don’t survive,” says Dr. Andrew Krahn, a cardiologist with the BC Inherited Arrhythmia Program (BCIAP) and the founder of the Hearts in Rhythm Organization. “Those who do survive were fortunate to have people nearby who called 9-1-1 immediately, performed CPR and had access to and used an automated external defibrillator (AED).”

Dr. Krahn is a member of the Heart Centre at St. Paul’s Hospital, home to one of three BCIAP clinics. The BCIAP cares for British Columbians with a history of an inherited arrhythmia (or inherited heart rhythm condition), an unexplained sudden cardiac arrest or a family history of sudden unexpected death.

“Early in my career, I met two boys whose grandmother died shortly after giving birth to their mom. Their mom had a cardiac arrest. I was curious to know more about why cardiac arrests seemed to run in families,” says Dr. Krahn. “I asked three other hospitals to join a registry of these patients and before long, we’d grown to a network of 23 centres across Canada.”

Creating research infrastructure to find a cause

In 2016, he realized that to really deepen understanding of inherited arrhythmias, he needed to expand his research network beyond physicians. The result was the Hearts in Rhythm Organization (HiRO), a network of Canadian heart rhythm specialists, researchers, allied health-care professionals, and patients and their families working to improve care for those affected by inherited, genetic heart conditions. HiRO, supported by St. Paul’s Foundation donors, is the research arm of the BCIAP.

“HiRO is driven by patients,” says Dr. Krahn. “We are always asking them what is important to them, what do they need from us as a way to inform our work and their care.”

The causes of some sudden cardiac arrests are still unclear. While some patients have a family history of SCA, or a genetic condition that makes them more susceptible, many otherwise healthy people have these attacks for no apparent reason.

Atkins is one of those people.

“The doctors ran a whole battery of tests while I was in hospital, but they couldn’t figure why my heart went into arrest. They fitted me for an implantable defibrillator that sits under my skin and can detect and stop irregular heartbeats,” remembers Atkins. “Genetic testing didn’t provide any answers. The only thing we know is that occasionally my heart rate speeds up for no reason.”

“The people we see at the clinic don’t know why they had a SCA,” says Emma Freeth, a genetic counsellor with BCIAP. “One of the ways we try to uncover a cause is through genetic testing. But genetic testing only gives us answers in 15 to 20 per cent of cases.”

The BCIAP has a team of cardiologists, nurses and genetic counsellors who identify, screen and support patients and families affected by an inherited heart rhythm condition.

“My role is to take care of the patient and their family, review the family history and help determine if genetic testing is helpful for the patient or their family members,” says Freeth. “If they do proceed with testing, I help explain the complex genetic information so that the patient understands what it means for them and the rest of their family.”

The future of research

“In the past five years, we’ve moved beyond basic genetic testing. We know it is not as simple as one gene causing one condition,” says Dr. Krahn. “We have started collecting blood and sputum samples for genetic sequencing that we can match with heart testing information. We are hoping to leverage the large data set of people with inherited heart conditions to see if we can develop gene therapies to help people with these conditions.”

Atkins has been one of the successful cases and largely been able to get back to life as usual. He is cycling and hiking and even started running again.

“My attack made me reassess my life priorities,” says Atkins. “I know I’m one of the fortunate ones and I want to do what I can to raise awareness of SCA and help researchers learn more about the disease.