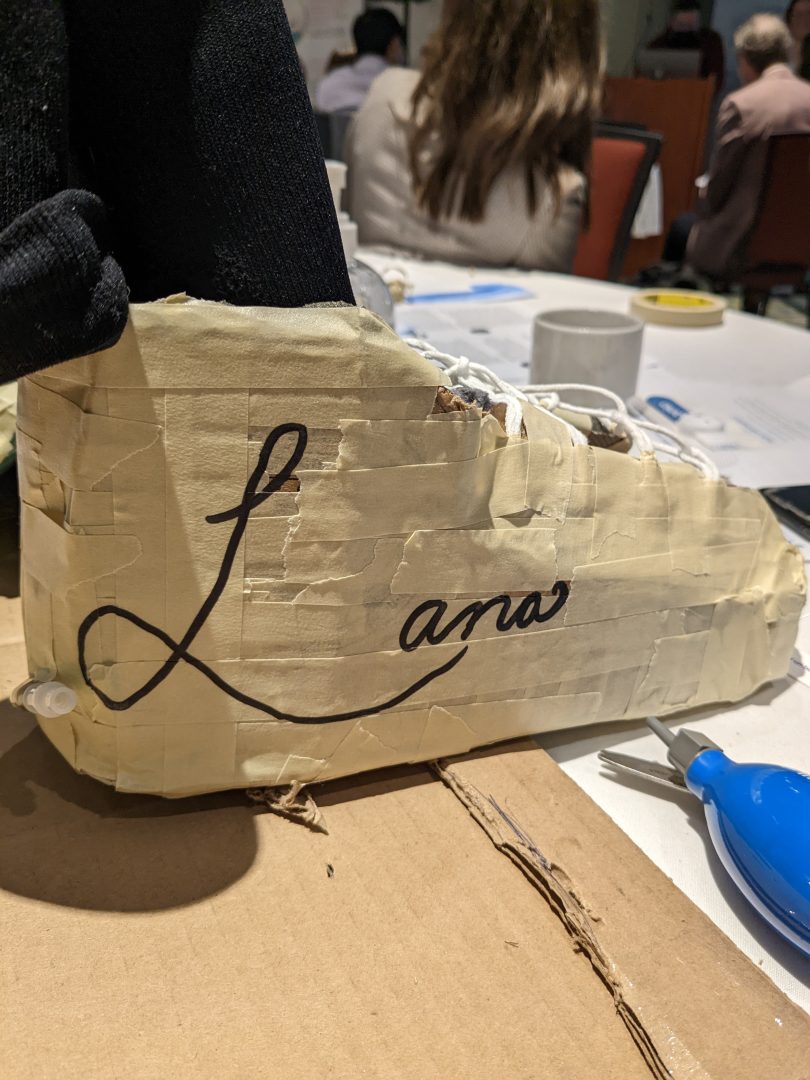 The Lana footwear system would minimize friction and pressure for those with diabetic foot ulcers. The concept emerged out of a recent Providence Health Care Skunkworks session.

More than 11.7 million Canadians live with diabetes and prediabetes. Approximately 15 per cent of people with diabetes develop diabetic foot ulcers (DFU), complications of which can lead to amputation or even death. A team at an innovation event hosted by Providence Health Care pitched a device that would prevent DFU from forming in the first place; Lana, a dynamic offloading shoe.

What are diabetic foot ulcers?

One of the end-stage complications of diabetes is peripheral neuropathy, a reduced or complete lack of ability to feel pain in the feet due to nerve damage. Most of these ulcers occur because of unnoticed foot trauma, commonly caused by poorly fitting footwear that creates areas of high stress or friction. The prevention and treatment of DFU are centered on reducing, or “off-loading,” those areas. Unfortunately, many current options for this are expensive, difficult to modify, and don’t adapt to changes in foot biomechanics over time.

The team proposed a footwear system named Lana, which means ‘floating’ in Hawaiian, that would minimize friction and pressure while also adapting to changes in foot biomechanics in real time. The system has two main components, the first of which is an interface between the exterior of a compression sock and the interior of a shoe that would reduce friction on the skin.

“The friction aspect was something we were definitely not focusing on in the beginning, but we realized that was actually a key component to the majority of the problem,” says Meg Schwellnus, a biomedical engineering student at the University of British Columbia.

The second is a series of sensors linked with pneumatic air cushions within the shoe. The sensors would map out areas of elevated pressure on the foot, and the cushions would adjust to minimize them in real time. This shoe system would actively prevent trauma to the skin and the formation of DFUs.

The prototype of the device that the team presented during their pitch appeared to be a shoe made of cardboard and tape, but it was more than met the eye. During the prototyping process, John Hwang, a doctor with Fraser Health, and Tanya Bennet, with UBC, brought in air-compression boots that are used to treat ankle fractures, which the team deconstructed and repurposed along with other supplies on hand, like cardboard, to create a functioning prototype.

The team approached their pitch with a business plan in mind. They proposed a “buy one, give one” model inspired by the shoe brand TOMS. They would target nondiabetic populations who would also benefit from an offloading shoe, like athletes and service industry workers, and use those funds to get Lana to the socioeconomically disadvantaged patients who need it most.

The team was excited to win the Research and Innovation award, especially because that meant they would be able to continue the project with support and funding from Providence Research. Julie Foreman, a PHC Clinical Nurse Coordinator, joined the team to be their special clinical advisor and PHC lead for future.

Diabetic foot ulcers are a significant burden on the healthcare system worldwide and on the patients who live with them. However, they are a preventable complication. Innovative projects and treatments like Lana would help offload that burden by preventing these foot ulcers from forming in the first place.