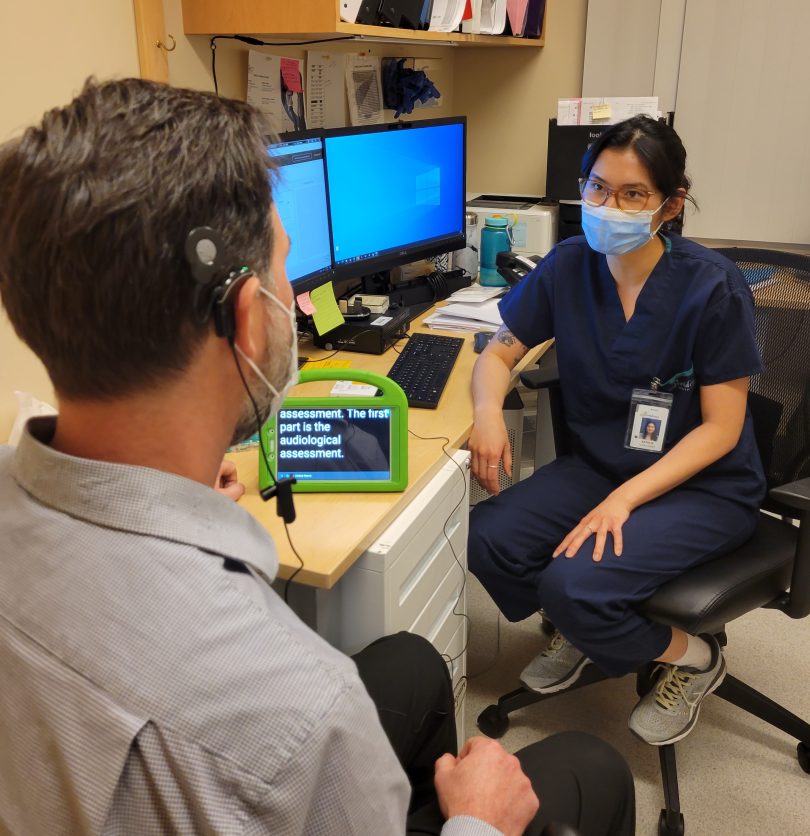 Audiology staff at St. Paul’s Hospital have found a way to help hearing-impaired patients communicate more smoothly at their appointments, where masks are still required.

They have sourced a Google speech-to-text transcription app and paired them with tablets that patients can easily read.

Those with hearing impairments often rely on facial cues and lip-reading to understand speech, notes Natalie Tran, a cochlear-implant audiologist at St. Paul’s.

“That’s a communication skill that masks have taken away from them.”

Pamela Findling knows that well. She was thrilled to use the new offering during her recent cochlear-implant testing appointment at the hospital.

The operation improved her hearing significantly. She learned to lip read.

Communicating was, for the most part, easy for her.

COVID-19 and masking upended all that. Her cochlear-implant appointments became frustrating: the external processor had to be turned off for several moments in the adjustment process. “I couldn’t hear anything at all (without the processor) and I couldn’t lip read because of the masks.”

Her audiologists had to write or type everything out for her. That annoyed Findling. She cherishes her ability to communicate independently. “I really wondered how people who were hearing impaired were coping when they couldn’t see someone’s face.”

In daily life, Findling says being unable to see facial expressions because of masking made her miss subtle cues that conveyed non-verbal information. Concentrating intensely to understand and be understood was draining and wore down her mental health.

When her audiologist met with her, tablet in hand, subsequent appointments became easier. “The tablet allowed for seamless conversations when I took the processor off. The system gives people the independence and really empowers them.”

That’s exactly the reaction Tran and her and her colleagues had been hoping for.

Right when COVID hit, the audiology team knew masks would be tough on patients. They tested a number of speech-to-text apps on their own personal smart phones and saw benefits right away.

Then they thought tablets, with their larger screens, could serve patients even better.

They secured funding for the tablets through the St. Paul’s Foundation and a COVID-19 health-care fund.

They consulted Providence Health Care’s Privacy Office to determine what apps were best for use in a hospital setting, where patient privacy is paramount. “We had to make sure that the patient data (from the app) would not be stored on their server,” recalls Tran.

“Anything that transcribes patients’ personal health information, such as their name, email, and personal things we might talk about – we don’t want landing where it shouldn’t.”

The audiology team decided on Google Live Transcribe for its reliability and security. It encrypts information before processing, and sends it back to the tablet without storing the data in Google Cloud Services where it could be vulnerable to breaches.

The program now has seven tablets for patients’ use, including one at the patient check-in counter, where plexiglass dividers can muffle sound and be hard on patients.

The app isn’t perfect. “Everyone’s voice gets transcribed, so if a patient is at an appointment with a companion their voice is picked up too so they can be part of the conversation. That can get a bit confusing,” says Tran.

Findling acknowledges that sometimes the app picks up the wrong word. “But I can infer what the audiologists are trying to tell me.”

Ultimately, she says, “I have so much respect for audiologists and I’m so grateful that St. Paul’s got these tablets.”

She says the idea is so inspired she would like to see the technology in other settings like dental offices where mask use might be strongly encouraged. “It would do so much for empowering hearing-impaired people and give them that independence.”