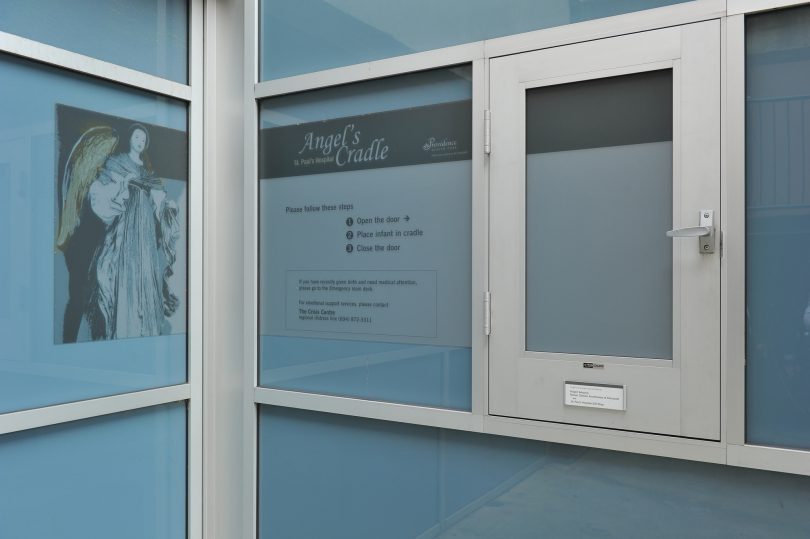 The Angel's Cradle at St. Paul's Hospital offers a safe space for a mother to leave her newborn baby if she cannot care for it.

St. Paul’s Hospital opened its Angel’s Cradle in 2010 to offer a safe and anonymous option for mothers who are unable to care for their newborn. Dr. Geoffrey Cundiff, head of Obstetrics and Gynaecology for Vancouver Coastal Health and Providence Health Care, was instrumental in spearheading the project. Following the tragic news of an abandoned newborn in the Fraser Valley, Dr. Cundiff answers questions about the Angel’s Cradle.

What is the Angel’s Cradle at St. Paul’s Hospital?

GC: The Angel’s Cradle provides a safe place for a mother to leave her newborn baby if she feels that she cannot properly care for him or her. It is located beside the entrance to the Emergency Department at St. Paul’s Hospital in downtown Vancouver. It is accessible from outside the hospital at the Emergency Department entrance. An angel sign visible from the street indicates the cradle’s location.

How does it work?

GC: The Angel’s Cradle area is sheltered from view, offering the mother privacy to maintain her anonymity. Once the outside door is opened, there is a 30-second delay before an alarm rings inside the Emergency Department. This allows the mother sufficient time to put the baby in the bassinet and leave the premises. The bassinet is accessible from inside the ED. Once the alarm goes off, ED staff will check on the bassinet. Hospital staff will not approach the mother to let her stay anonymous.

The current process for abandoned infants found or brought to St. Paul’s Hospital begins with notification of a social worker, who makes a referral to the Ministry of Children and Families.  The infant is often admitted to the neonatal intensive care unit (NICU) for assessment and any necessary treatments.

What happens to a baby left in the Angel’s Cradle?

GC: Once a health assessment has been done and any necessary medical treatment has been given, the baby is put in the care of the Ministry of Children and Family Development.

Why do we need an Angel’s Cradle?

GC: Sadly, despite the access to adoption services and support of mothers who cannot care for their babies, there are still infants who are abandoned in the community. This is a dangerous place for a newborn infant as they are often exposed to harsh elements. We don’t know why these mothers abandon their babies in the community, but it seems to be related to a need for anonymity out of fear for their own safety. The Angel’s Cradle offers this anonymity, allowing the mother to abandon the baby in a safe place. The babies who have been left in the Angel’s Cradle are proof that it works.

How many times has the Angel’s Cradle at St. Paul’s Hospital been used?

GC: Since it was opened in 2010, two newborns have been left at the Angel’s Cradle.

The concept of “baby boxes” is not new. What’s the history?

GC: The history of so-called “baby boxes” runs deep.  In 1198, the foundling wheel was developed by Roman Catholic orders of nuns/sisters to allow mothers unable or unwilling to care for their infant to anonymously place the infant in the hands of those who could see to its better interest. They existed throughout Europe from Mediaeval times to modern times, but fell out of use by the 20th Century as they were felt to be incompatible with the modern social system.

The concept was reintroduced to the modern world in India in 1994 in response to increasing female infanticide. Foundling wheels now exist in at least 11 European countries. While foundling wheels do not exist in the United States, 47 states have safe haven laws. These laws allow parents to legally and anonymously give up their newborn child to certain places known as “safe havens”.

In the last decade, hundreds of babies have been abandoned this way; it’s estimated one or two infants are typically left at each location every year, though exact figures aren’t available.

What if a mom in distress is not able to get to St. Paul’s Hospital? What should she do?

When you hear stories of abandoned babies, such as this recent case in the Fraser Valley, what do you think?

GC: I am deeply saddened by these stories. I am sad for the baby and the mother. I wish that I could build more Angel’s Cradles.

For more information on the Angel’s Cradle, please visit our website.