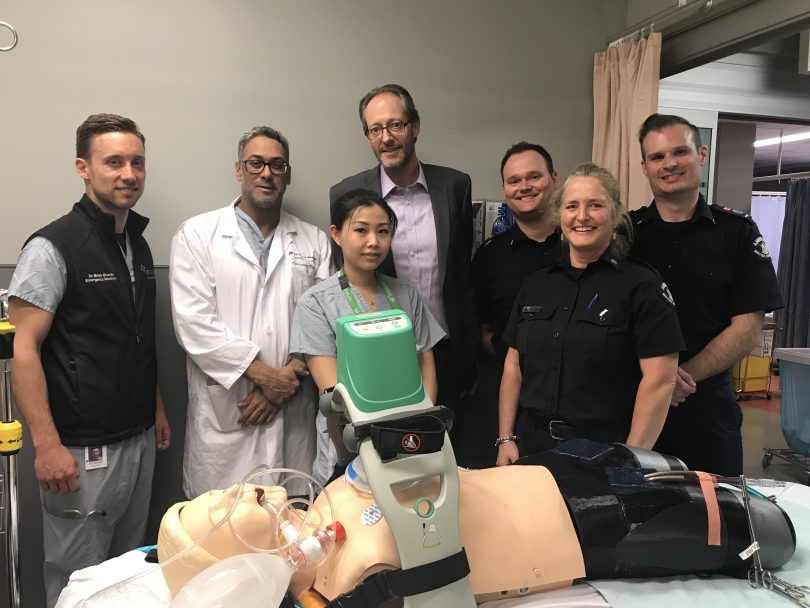 It was February 5, 6:04 pm. Chris Dawkins had just finished a workout on his home rowing machine when he suddenly collapsed.

Dawkins, a 55-year-old Vancouver physician, was in cardiac arrest. His heart had stopped beating and he was clinically dead.

His wife of 30 years, Fran, was in the room with him when she saw him fall. She immediately called 9-1-1. She had the presence of mind to know what was happening and started CPR right away.

She continued to administer CPR on her husband until a swarm of emergency vehicles arrived – two firetrucks and three ambulances.

Fire-fighters and paramedics used all the recommended treatments, including CPR, defibrillation, and advanced medications.  Nothing was working to revive Dawkins.

Cardiac-arrest patient had luck, highly trained paramedics and St. Paul’s emergency team on his side

Under standard medical protocols, he should have then been declared dead.

But luck and skilled professionals were on his side that day.

The Advanced Life Support paramedics dispatched that day, Tom Watson and Ben Johnson, were highly trained in a special protocol set up in co-ordination with St. Paul’s Hospital that saved his life.

The ECPR protocol for cardiac arrest is for specific cardiac-arrest patients who are unable to be revived with standard therapies. It involves a rapid, co-ordinated response involving paramedics and a specialized team at St. Paul’s Hospital.

Paramedics called the St. Paul’s Hospital Emergency Department to activate the protocol. They attached a portable automatic chest compression machine to him (the LUCAS) so high-quality CPR could continue, uninterrupted while the paramedics raced the patient to St. Paul’s.

At the Emergency Department, the ECPR Team was ready: emergency physicians and nurses, cardiologists, perfusionists, anaesthesiologists, and respiratory therapists. Within 12 minutes of arrival, Dawkins was connected to the life-saving ECMO machine. This external pump works as the patient’s heart and lungs, as the team works to diagnose and fix the cause of the arrest.

The ECPR protocol has the ambitious goal of getting a patient started on the ECMO machine within 60 minutes of the cardiac arrest. Dawkins was on the machine at 6.56 pm.

Positive outcome the result of a successful collaboration among many

In his case, 52 high-paced minutes passed between his wife’s call to 9-1-1 and getting started on the ECMO machine. He would spend the next 48 hours attached to it.

“This positive outcome is the result of the collaborative effort involving BCEHS and many departments in St. Paul’s Hospital, especially the cardiac surgery intensive-care unit and the emergency department,” says Dr. Brian Grunau, the Protocol Director. “Every second counts, so we have planned every detail to maximize speed and efficiency.”

Dr. Jamal Bashir, the St. Paul’s cardiovascular surgeon who led the surgical team after Dawkins arrived, says everyone involved, including the patient’s wife, “did what they needed to do perfectly, so we were able to get him in and on the heart lung machine in under an hour.”

“I can’t emphasize enough how much of a team exercise this is. Everyone has to do their part to achieve success, and all team members – paramedics and hospital staff and clinicians – have specific roles they practise in monthly simulation exercises.”

Patient is on the road to a full recovery

So what caused the problem that nearly cost Chris Dawkins his life? A piece of plaque had broken off one of his coronary arteries, stopping the blood supply to his heart. That caused his heart to stop beating. After he was started on the ECMO machine, cardiologists performed a coronary angiogram to remove the blockage.

He has returned to work and is making a full recovery, although he’s taking things slowly.

A key goal is to heal some ribs that were broken during the compressions – a small price to pay for having his life saved, he notes.

He is profoundly grateful first, to his wife Fran for her role, then to the fast-thinking paramedics and team at St. Paul’s for saving his life. “I probably should not be here at all,” he reckons.

On a lighter note, “My days of the rowing machine are over,” he says.