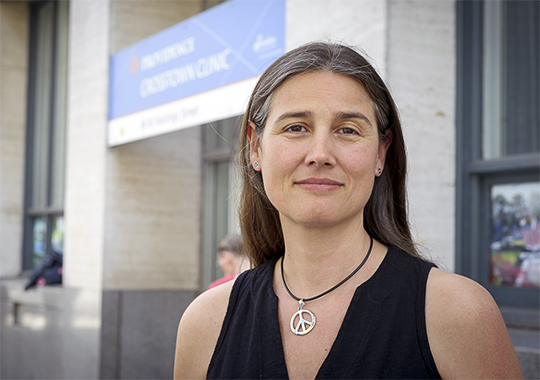 This story originally appeared on the Canadian Institutes of Health Research (CIHR) website.

According to the Public Health Agency of Canada, 3,286 Canadians died of apparent opioid-related overdose between January and September 2018. Fentanyl or fentanyl-related substances were involved in 73% of these accidental deaths. To better address this growing crisis, researchers are trying to help people overcome their dependencies in innovative ways.

Dr. Eugenia Oviedo-Joekes, a CIHR-funded associate professor in the School of Population and Public Health at the University of British Columbia and a scientist at the Centre for Health Evaluation and Outcome Sciences, has been examining the effectiveness of patient-centred care (PCC) for people seeking treatment for substance use disorder.

“Traditionally, doctors have decided whether more or less methadone or suboxone will help a patient beat their dependency on opioids,” said Dr. Oviedo-Joekes. “PCC is a way for doctors to move away from a one-sided, universal treatment. Instead, they can pose important questions to these patients, like: ‘How do you feel about your dose? Is it enough or too much?’. So it’s knowledge exchange.”

With a multidisciplinary team of drug policy advocates, healthcare providers, decision makers and academics, Dr. Oviedo-Joekes first looked at records of registered use of PCC as a treatment for opioid dependency and substance users overall. By analyzing the qualitative results she acquired through this study and her Program of Outcomes Research on Treatment with Injectables for Addiction, she now wants to demonstrate how PCC’s implementation by doctors can successfully motivate people to seek sustained help regarding their opioid dependency by removing social stigma.

“We want people to learn that opioid addictions should be treated like other illnesses, such as asthma or cardiac problems,” said Dr. Oviedo-Joekes. “This will help eliminate stigma. By listening to the patients’ needs, we can collect new evidence that will positively change perceptions of opioid users by the general public and policy makers overall.”

Jordan Westfall, President of the Canadian Association of People who use Drugs, is a member of Dr. Oviedo-Joekes’ multidisciplinary team as a person with lived experience, and believes that PCC is indeed an effective tool.

“I wanted to work on this project because PCC recentres the focus of research,” said Mr. Westfall. “It respects the views and choices of the patient in their medical care. For people who use drugs, this approach is a rarity and more of it is needed because it will ensure that they are as safe and healthy as possible.”

As Scientific Director of CIHR’s Institute of Neurosciences, Mental Health and Addiction, Dr. Samuel Weiss respects how Dr. Oviedo-Joekes’ research examines the efficiency of PCC treatment from both clinical and population health angles.

“While conventional approaches to treating substance use disorders have saved lives, they are not the only solutions,” said Dr. Weiss. “Between January 2016 and September 2018, over 10,300 Canadians died from an apparent opioid-related overdose, and it remains a substantial health threat today. Dr. Oviedo-Joekes’ research will help us determine whether PCC is effective at a clinical level through reducing stigma and encouraging effective patient-physician communication, ultimately resulting in more users seeking and committing to treatment for substance use disorders.”