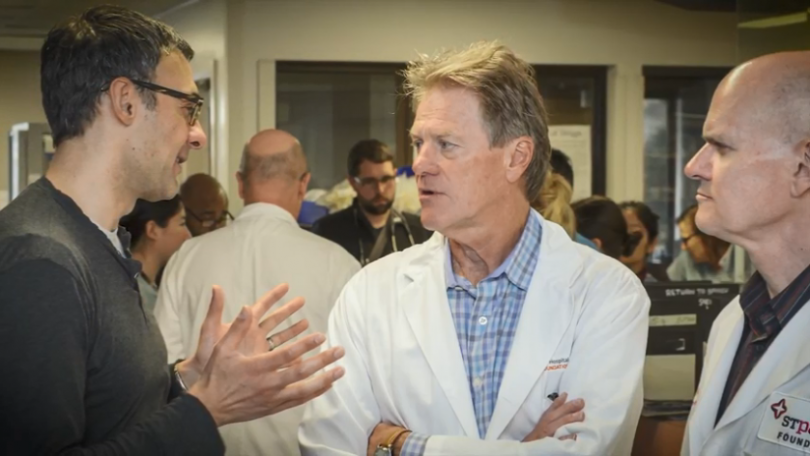 Dr. Jim Russell (centre) is the world's top expert in septic shock, according to Expertscape.com. Photo: LifeSciences BC

September is Sepsis Awareness Month and Dr. Jim Russell, a Principal Investigator at the Centre for Heart Lung Innovation (HLI) at St. Paul’s Hospital, is being recognized as the world’s top expert in septic shock.

The UBC professor of medicine is ranked first on the list of experts worldwide, as announced this week by independent ranking platform Expertscape.com. UBC is first on the list of the world’s top institutions for septic shock while St. Paul’s Hospital comes in seventh.

September is Sepsis Awareness Month. So congratulations to Dr. James Russell of the University of British Columbia @PHCResearch — Recognized as an Expertscape World Expert in Septic Shock. #SepsisAwareness https://t.co/K7QkNqjVJl pic.twitter.com/avWUGNVzAr

Sepsis is a potentially life-threatening condition caused by the body’s response to an infection. If sepsis progresses to septic shock, blood pressure drops dramatically. This may lead to death.

An internationally recognized leader in the fields of critical care and severe infection, Dr. Russell founded the Critical Care Medicine division at UBC and St. Paul’s in 1982. Today, it is one of the premier critical care programs in Canada and the world.

In addition to leading the world in septic shock expertise, he is also ranked #1 by Experscape.com in vasopressin and norepinephrine.

Read on to learn more about Dr. Russell and his work.

Describe your job in one sentence:

My job is to do pivotal research to understand why sepsis causes such high mortality and long-term complications by discovering better diagnostic tests and more effective treatments.

What is your favourite thing about your work?

There is still an incredible buzz when you are the first in the world to get some really meaningful results of studies and to see those through to publication and wide-spread dissemination to the public. Then, when the insights are used clinically around the world – wow!

How did you end up specializing in sepsis and, specifically, septic shock?

Sepsis is an incredibly important problem: few people know that more people die of sepsis than die of heart attack and half of the patients are under 55 years of age. One in three die within one month of getting sepsis, worse than cancer and worse than heart attacks. That drove me to take on sepsis as a career research challenge.

What research projects related to sepsis and/or septic shock are you working on now?

I am now studying on three sepsis-related topics:

During your career, what have been the most significant breakthroughs in the prevention, diagnosis and treatment of sepsis and septic shock?

For prevention it was simple – frequent hand-washing by hospital staff to prevent hospital-acquired infections. For diagnosis, we discovered several genetic variations that increase risk of dying of sepsis and other genetic variations that could improve the response to treatments. For treatment, early treatment (within 1 hour!) is critical and our own most exciting discoveries are the 2 new cholesterol-related drugs (one on the market, the other in development) that we and others are testing to see if one or the other or both decrease the mortality rate of sepsis.

What do you hope to accomplish in your work before you retire?

I hope that we can have a strong impact to increase public awareness of the sepsis story, improve early diagnosis and especially have one of our treatments be proven effective.

What do you like to do in your spare time when you aren’t busy being the world’s #1 expert in septic shock?

I love family time with my wife and two grown daughters, and I relax by reading, working out, playing golf (not very well), travel and car racing 🙂

If you weren’t a professor and researcher, what would you be instead?

Dr. Russell was the recipient of the 2017 Michael Smith Foundation for Health Research Aubrey J. Tingle Prize. Check out the video below to learn what inspired him to study medicine and how he built his research career.