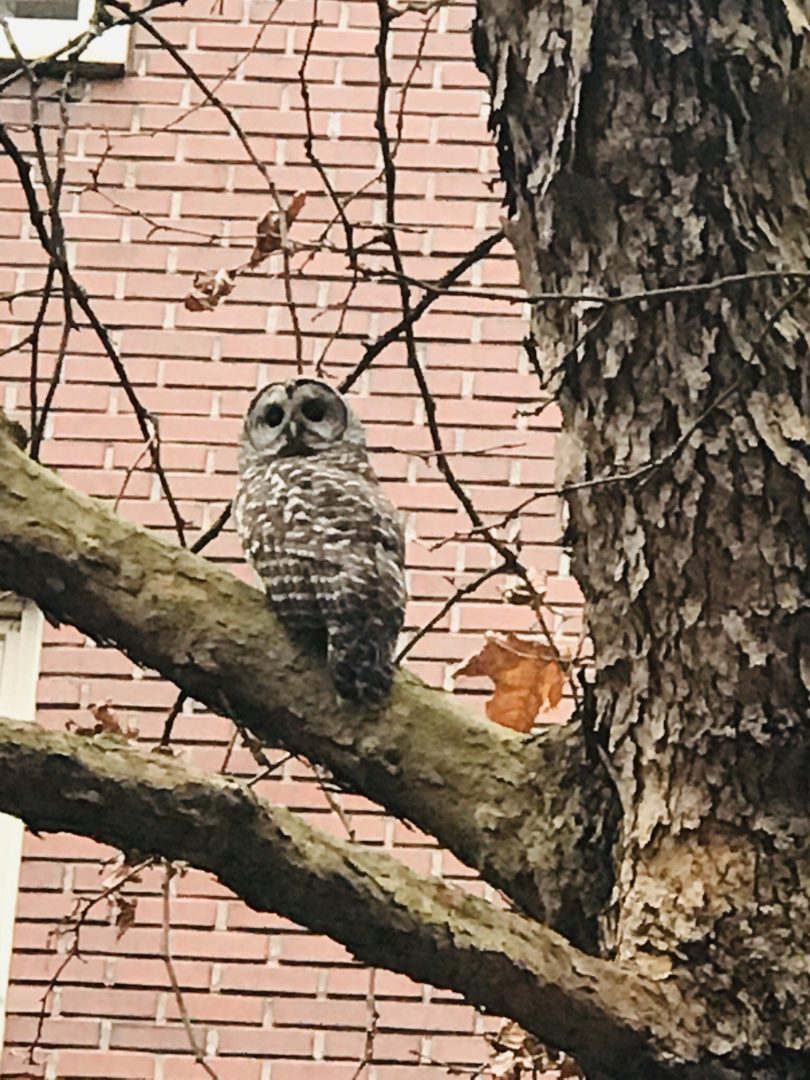 A barred owl is attracting crowds of onlookers at St. Paul's Hospital. Photo from @NajahAdreak/Twitter.

OWL UPDATE December 2, 2019: The owl was spotted back at St. Paul’s Hospital this morning, but unfortunately ended up injured, on the ground. Our quick-thinking staff called the Orphaned Wildlife Rehabilitation Society (OWL) for help. The owl has been assessed, and OWL says it appears to have hit a wall. It has some bruising around one eye and the ears. The owl is being cared for at their facility in Delta.

For the past few days, a feathered visitor has been drawing crowds at the front entrance of St. Paul’s Hospital. The barred owl has spent several hours a day in the courtyard, most of it perched in the Hippocratic tree, rather appropriately. (The tree was grown from a seed taken from the Tree of Hippocrates on the island of Kos in Greece, symbolizing the Providence dedication to teaching, service and research.) 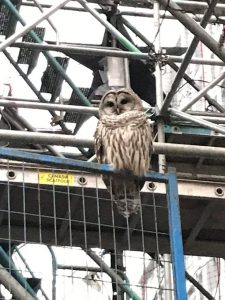 Barred owl sits on fence around Lights of Hope display at front entrance of St. Paul’s Hospital. Photo from @StefanieMacLeod/Twitter

According to the OWL (Orphaned Wildlife) Rehabilitation Society based in Delta, there are a lot of barred owls around right now, “He may be leaving to hunt in the evening and will stay close during the day to avoid predators.”

The St. Paul’s visitor has been dubbed “Owl Pacino” by some staff, who believe it’s the same owl that comes back every year. Barred owls are not afraid of humans and have been known to dive-bomb people. So far, this visitor doesn’t seem too ruffled by all the attention. Anyone trying to take a closer look should still stay at least six feet away, according to the experts.

Last year, more than 150 barred owls were brought to OWL either dead or injured. There were numerous sightings of the raptor in downtown Vancouver.