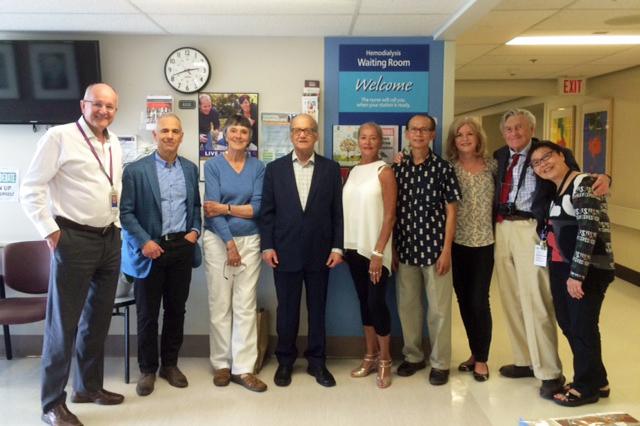 In the spring of 1982, Darrell Epp became a dialysis patient at St. Paul’s Hospital. At the age of only 27 years old, his kidneys were beginning to fail due to complications from Type 1 diabetes. His prognosis was bleak – doctors feared he might not live more than 18 months.

Social worker Angie Morris had just started on the renal unit at St. Paul’s when the medical director, Dr. Angus Rae, referred Darrell to her to help provide support as he faced what looked like the end of his life.

“With Sherrill Burden as head nurse, the renal unit team was a small close-knit group,” explains Angie. “They really took Darrell to their hearts and became his family. The nurses would even invite him to their social events.”

For Darrell, having the support of the team was imperative not only to his physical health, but to his emotional wellbeing as well. He speaks warmly of all its members and says of the social worker, “Angie and I had a comfortable relationship. She listened to my concerns with both understanding and compassion and did her best to resolve them. When she checked in to see how I was doing, I always enjoyed our conversations.”

Over the years, Darrell underwent a total of 3 kidney transplants – 2 of which were performed by Dr. Landsberg – including one from his sister that lasted 10 years. He has also benefitted from both home hemodialysis and dialysis at St. Paul’s, where he currently dialyses at least three times a week. Now 61 years old, Darrell could be one of the world’s longest surviving renal patients.

Although Angie retired from St. Paul’s in 2000, she has kept in touch with many of her former colleagues, including Sherrill, who moved back to Australia in 1987. When Angie heard Sherrill was coming to Vancouver for a visit in May, she contacted Darrell and Dr. Rae, who now lives in Victoria, and the four of them arranged to meet on the unit. As the days passed leading up to the reunion, word spread and several others arranged to be there, including a retired nurse and technician, in addition to two of the nephrologists and the current clinical nurse leader Cruz Amable, representing the renal staff who currently care for Darrell.

“It shows what a bond we had that we can get together again after all these years,” says Angie.

The reunion on the renal unit on May 20th was an opportunity to catch up and also for Darrell to say thank you.

“I have an enormous amount of respect, admiration and gratitude for all of them,” says Darrell. “They supported me through all of my trials and tribulations, and took the time to talk to me about other things beyond my medical condition. I owe my life to them.”