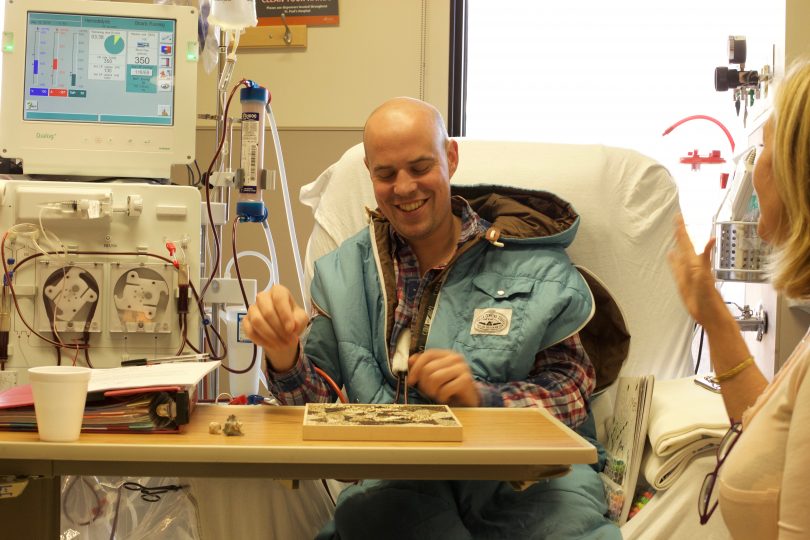 When decreased kidney function requires a person to begin hemodialysis treatments, life changes dramatically. The huge amount of time spent on a dialysis machine means personal independence suddenly plummets. Regular treatments, as often as three or four times a week and up to four hours a stretch, become their new normal.

During treatment, patients can’t do much other than sleep or watch TV, so boredom, inactivity and anxiety can quickly set in.

With its focus on patient-centred care, St. Paul’s Hospital’s hemodialysis unit developed a pilot art program funded by St. Paul’s Foundation. It keeps patients engaged, creative and relaxed during their treatment by creating their own artwork.

Twenty-three-year-old Vancouver resident Rozelle Callangan, who was born with kidney disease, has benefitted enormously from the Art Cart project. While she had surgery as a child, her kidney disease developed slowly through the years, becoming serious in January 2015. She’s been on dialysis for a year, spending as many as 16 hours a week at St. Paul’s renal unit. “The Art Cart helped me through the tough times. When you have kidney disease, you feel alone, especially as a younger patient.” She now wants to be a social worker, based on the care she has received through the renal program. “I want to help people, in the same way I’ve been helped.”

A St. Paul’s Foundation grant covered the purchase of art supplies and the hire of an artist to create the program. Students from Emily Carr volunteered their time to help participants with their artwork.

Since Art Cart’s launch, 20 patients, many who never knew they had artistic talent, became the proud creators of paintings, puppets, dream catchers, rainmakers and a mandala, or geometric piece of art fashioned from rock, sand and shells. The patient-artists included a blind gentleman who created a musical drum-type instrument out of a gourd. Rozelle made a rainmaker, a poster about kidney disease and other art pieces.

“The response to this project has been overwhelmingly positive,” says Michele Trask, patient-care manager of St. Paul’s Renal Unit and an artist herself. She says patients’ boredom and anxiety levels were reduced by focusing on their artwork.