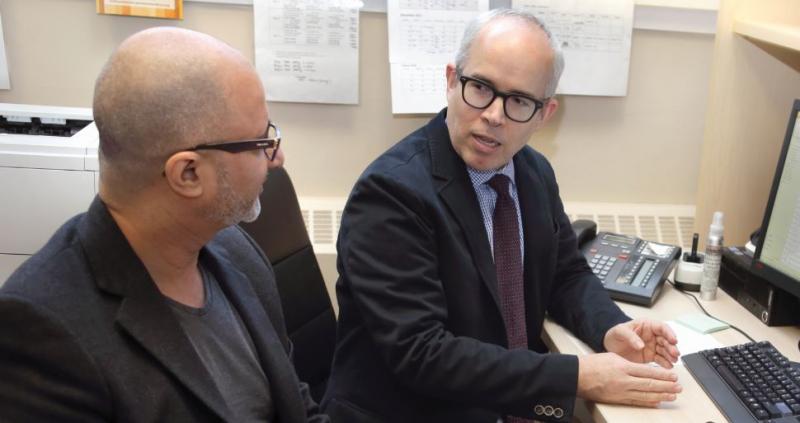 This is an excerpt from the Winter 2018 edition of The Tablet, the BC Pharmacy Association member magazine.

Parker Rothgordt visits Providence Crosstown Clinic three times a day, seven days a week where he injects himself with diacetylmorphine, the active ingredient of heroin, under a nurse’s supervision.

Rothgordt injured his back as a shake-block cutter in the 1990s. Originally from Port McNeill, he tried to manage his pain through prescription medication, but began buying heroin on the street.

In 2013, he applied to be part of Crosstown’s SALOME study, in which about 200 patients who were unsuccessful with other OAT therapies like oral methadone were able to receive injectable diacetylmorphine, the active ingredient of heroin, and hydromorphone under the care of clinic staff. It is the only clinic in North America that offers prescription heroin as a form of treatment.

“It’s kept me alive. If I had been using on the street, chances are I would be dead,” Rothgordt says.

The use of opioids, over time, can change a person’s physiology requiring them to take external opioids to maintain function and prevent withdrawal symptoms. This is a medical condition referred to as addiction and needs to be treated as such using all options available. This includes allowing patients, along with their clinicians to determine their own dosing levels, says Crosstown Clinic’s Pharmacy Director Amin Janmohamed.

Janmohamed was part of the NAOMI Study conducted in 2005, a co-investigator in the SALOME Study and now, with Bixa Therapeutics, works with Crosstown Clinic.

Of the current Crosstown patients, 20 per cent that started on injectable treatments have moved to oral treatment and out of the clinic program. Some patients are also receiving other oral therapy as they transition through their treatment.

“Injectable treatment is not our end goal,” says Crosstown’s lead physician Dr. Scott MacDonald. “In this population, they are suffering, they are at risk of death.”

He sees community pharmacies, which are set up across the province, playing a key role in helping transition patients back to their communities where they have support structures, not just staying on injectable hydromorphone in Vancouver’s Downtown Eastside.

“If there’s anything we have learned from the opioid overdose crisis it’s that there is a significant number of people who are undertreated and underdiagnosed,” MacDonald says. “Pharmacies could be part of that solution.”

Read the rest of the story HERE.