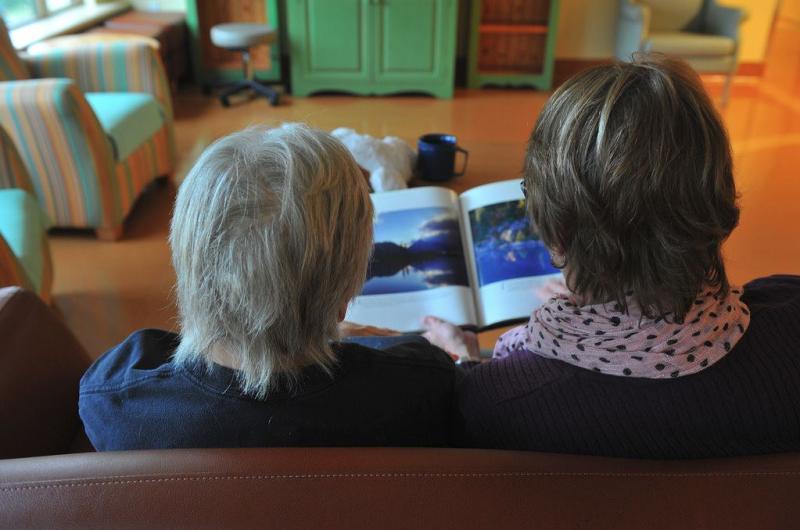 With the number of Canadians living with dementia expected to nearly double in 15 years, the pressure on family members to look after loved ones at home and eventually transition them to residential care will likewise increase. No one knows better the transformative value of a human-centred approach throughout this process than Ann Adams. Her mom, Norma, lived with dementia for seven years before passing away seven years ago to this month in 2011.

For Adams’ mom, the disease first manifested as a series of anxiety attacks that, at times, proved debilitating. Adams took her mom from her home in Campbell River to see Dr. Les Sheldon, a geriatric psychiatrist at St. Vincent’s Hospital in Vancouver – the same site as the proposed Heather Street dementia village. She went there hoping to get help for her mom’s anxiety only to learn that Dr. Sheldon recognized her mom’s symptoms as early onset of vascular dementia and Alzheimer’s disease. Adams, her dad and her brothers didn’t tell her mom right away about the diagnosis out of concern it would only serve to heighten her anxiety.

Up till that point, Norma, a schoolteacher and former beauty queen and runner-up to Miss PNE, had been a capable, physically fit woman with a beautiful singing voice. Given her Norwegian ancestry, she was devoted to her family and cultivated a loving household for her three children and husband. When her disease was formally diagnosed, her family engirdled her with safety and support.

Initially, Norma remained at home with Adams’ father, Bud, the primary caregiver. He took over all domestic aspects of the household which was odd for her as it was her territory. He cooked and cleaned and included her as much as possible in the regular activities of the day, such as asking her to set the table. He would let her clear the table when she wanted, even halfway through the meal as it gave her a sense of purpose. In the kitchen, his take on it was: “You stir this and I’ll chop these.”

Adams would visit most weekends to relieve her father of his duties. Sometimes her mom would confuse age and time and think Adams was still a teenager sneaking in late, and would admonish her for it. When Norma’s condition worsened, she began having psychotic episodes tied to anxiety about her husband. She often saw him as a threat and even retreated to Adams’ room during a visit in order to avoid him. More than once, she tried to run away, going so far as to start packing a suitcase.

It was apparent to both the family and Norma’s doctor that her dementia had reached a new level, and that her husband could no longer serve as her primary caregiver.

“The doctor said to my dad that he had done his job and kept her at home as long as he could. It was time to move her to an environment equipped to deal with this disease and keep her engaged, healthy and happy. So our way of caring for her shifted with us spending a lot of time at her new home,” said Adams.

After Norma was moved to a care home in 2009, the family continued to rally around her, maintaining a semblance of normalcy by gathering for family luncheons in the facility’s atrium or taking her home for dinner and tea or out for ice cream or a walk on the beach. Of course, Norma initially underwent a transition period when she wanted out of there, but settled in within a few weeks and looked forward to her family’s visits. And, contrary to the dynamic at home, she was always happy to see her husband.

According to Adams, her mom had random flashes of lucidity, telling her that she knew this was hard for the family and asking how her husband was doing. After a while, they stopped taking their mom home for even short periods because it would trigger anxiety. That place was no longer her reality whereas as the care home was. Instead, they continued to focus on what Adams refers to as meaningful visits, making the time together rewarding for everyone.

Adams notes that caregiving for a loved one with dementia is day in, day out for years and can be very taxing. She said one has to have “buckets of empathy” and to try not to become exasperated though exasperation can and will happen when a loved one is unable to interact. She said you don’t need to try to talk to her or him about breaking news, just ask simple questions with yes or no answers such as do you like your green beans?

“The social stimulus that family members and friends bring to patients in care facilities is vital. When I was there, I was unusual because I was there for long periods of time. Most family members would be there for an hour or less, some only once a month. They didn’t know how to have a good visit,” said Adams.

Adams was such a fixture at the care home that she would attract the interest of other patients who would see her as someone with whom they could communicate. Before long, she would be surrounded by a whole little bevy. On one occasion, the group had a half-hour conversation about fingers. A patient had two fused together while another had fat sausage fingers. One lady who never wore a wedding ring comically went on about how awful men were.

A year before she died, Norma fell and broke her hip. Ann and her family were not sure she would recover from the surgery so they ensured everything was done post-op to make her comfortable.

“Dad and I were with her in the hospital room where she was resting peacefully after her operation. We were prepared and waiting, expecting the worst. To our surprise and happiness, mom woke up, sat up, looked at us and said “Well, I think it is time for tea”,” said Adams.

Adams’ mom lived for almost another year in care, doing well, experiencing and contributing to moments of joy right up to a few days before she passed. Previously a vigorous woman with a great appetite, she lost interest in food and her weight plummeted to 80 pounds. She was unable to fight off the bladder infection that ultimately resulted in her passing.

The Adams family saw those final months and days with Norma as natural opportunities to rejoice in her life, creating new memories and optimizing the quality of their time together. Years earlier when her dementia had begun to progress, Norma had shared with her daughter a fear of being pushed to the corner and forgotten – a fear that fortunately never reached fruition.

That is why Adams is excited about plans for a dementia village in Vancouver as its proposed services and amenities will help ensure that the lives of people with dementia continue to be worth living and celebrated in the face of so many horror stories about the disease.