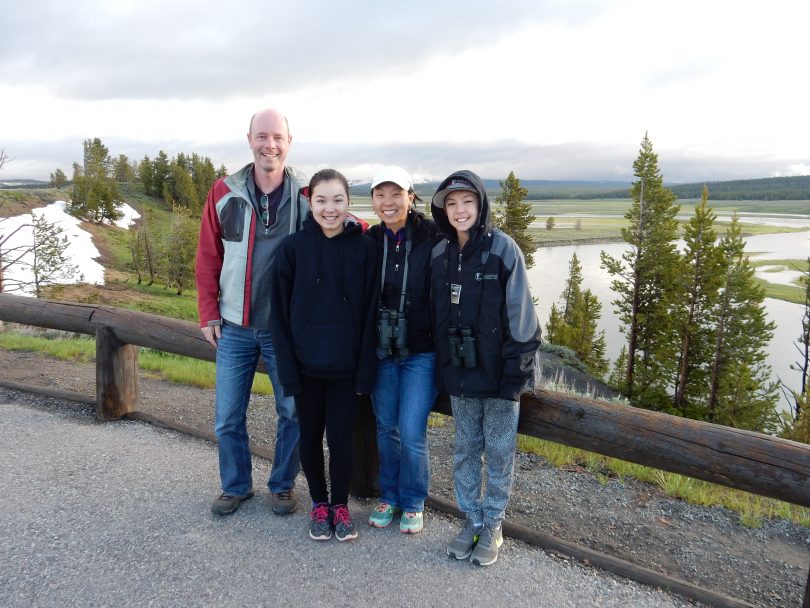 Dr. Scott Lear (L) with his daughters and wife Melodie

Dr. Scott Lear is first and foremost a father of two, but the Pfizer/Heart and Stroke Foundation Chair in Cardiovascular Prevention Research at St. Paul’s Hospital is also a newly-diagnosed heart disease patient. He urges all fathers to give themselves and their families the best gift possible – be open and honest about looking after your own health.

As a father, I love Father’s Day. That and my birthday are the two days of the year I feel like a king in my house. My two kids and wife are happy to do whatever I want on Father’s Day and I love them dearly for it.

This Father’s Day gives me pause to think about my health and that of other fathers. Men in general are very stoic when it comes to their health. We don’t talk about it to each other. In fact, men don’t talk about much to anyone other than the weather and the latest sports scores. Asking a friend to put your new BBQ together is about the closest a guy gets to ‘reaching out’.

This type of thinking doesn’t help when it comes to our health and our family. Last year I was diagnosed with heart disease, but I sat on my symptoms for a few years before telling my wife and seeking help. I started getting palpitations with exercise a few times per year and early on I did talk to a cardiologist. We both thought it was fine and that was the end of that.

Over the years, though, it increased to happening a few times per week. Yes, I was worried. I work in cardiac rehab so I know what could go wrong. Even still, I wanted to try and deal with it on my own. I knew that if I told my wife or my cardiologist friend, there would be no turning back. I would be sent for tests, diagnosed and treated. It’s funny how that sounded so bad to me, yet that’s exactly what you want healthcare to do. Looking back, I’m sure it was the male mentality of ‘figuring things out for myself’, but this isn’t something like getting lost and refusing to ask for directions.

Once I told my wife, she encouraged me to investigate further. Even after agreeing to that, it still took a month for me to do anything. In a short time, I was diagnosed and started taking medications. I recall how down I felt at the time. I must admit, while I have heart disease, it’s not life threatening and I’m optimistic of my long-term outcome. However, there was a bit of a blow to my pride. I was no longer healthy. I couldn’t prevent heart disease from happening, though I’ve spent the last 20 years researching that very topic. What’s worse…following my own advice didn’t save me.

My wife and I talked about what to say to the kids. I didn’t know what to make of that. Did I need to tell them? I mean, I didn’t want to make a big deal of it. Would they understand? Would it make them think of me as a weaker father? I told my wife I would deal with it, and then did what any guy would do – left the room and totally forgot about what we just discussed.

Months went by and I never mentioned it to my kids. One day my daughter asked me what the pills on my bathroom counter were for. I froze mentally. I wasn’t ready to answer her, so I pretended not to hear her question. I was just coming to grips with my new routine and didn’t want to make that even more complicated.

Some more time passed and it never reoccurred to me to tell my children. The thought simply wasn’t in my mind. I was comfortable with the status quo. It wasn’t until one night over a casual dinner conversation when I mentioned something about having heart disease. Not an announcement to the family, I was just contributing to whatever we were discussing at the time.

I didn’t realize what I’d said until I saw my wife’s face, then I paused. Then we all paused. I could see the worry in my daughter’s eyes. Within a few seconds the silence was shattered by my son crying. Not just a few tears but full-on bawling, saying that he didn’t want me to die. I sat back for an instant; this wasn’t the reaction I had expected. Nor had I prepared for it. I gave my son and daughter hugs and went on to explain to them what had happened and that I am fine and being looked after well.

Now thinking back, that slip up was probably easier (at least for me) than if I had called a family meeting to tell them the news, although my kids are old enough that it probably would have been better to share it with them earlier. I know now that my reluctance to tell them was out of fear. Fear of what they might think and fear of being vulnerable.

Being vulnerable: that’s something that we fathers aren’t good at. Seeing my kids’ reactions that evening made me realize the role we fathers play and how we provide an anchor of stability in their lives. That’s something we may not be aware of, but it is always there. This doesn’t mean we have to be pillars of strength, and in fact opening up to our kids and showing that vulnerability can make us stronger.

So happy Father’s Day to all the dads. Just remember, take care of yourself too. You have plenty of people around you who care about you and want to help. Doing so could be the best gift you give yourself and your family.