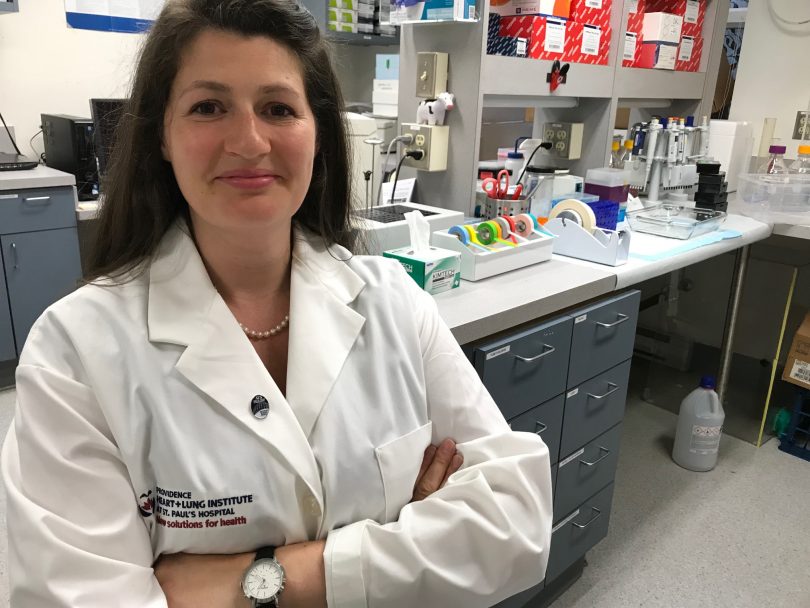 Chronic obstructive pulmonary disease (COPD) is an insidious disease that damages the lungs long before symptoms arise, Vancouver scientists have shown in a study that could result in wholesale changes to research, diagnosis and treatment approaches.

About 140,000 B.C. residents have been diagnosed with the incurable, progressive condition that affects breathing. COPD is a leading cause of death and hospital admissions in B.C. and across Canada.

In the study, published in a journal called Lancet Respiratory Medicine, researchers from the University of B.C. based at the St. Paul’s Hospital Centre for Heart Lung Innovation (HLI) used novel, micro-CT imaging technology capable of 1,000 times resolution to look at whole lungs or lobes that had been removed from patients (with and without COPD) who received surgical treatment for cancerous lung tumours many years ago.

Whole lungs and lobes were donated by the patients (almost all of them in their 60s) after the organs were removed. Patients consented to the use of their resected lungs for research purposes and the donated organs have been preserved at the HLI tissue bank in Vancouver, one of the largest lung tissue biobank repositories in the world. The research team developed new methods to analyze the archived lung samples using one of the only micro-CT scanners in Canada.

Of the lungs or segments of lungs examined from 34 patients, some were from smokers with normal lung function (but with a cancer diagnosis), and the rest were from patients with either mild, moderate or severe COPD (formerly known as emphysema). Research collaborators from the University of Southampton in England and the University of Pennsylvania also collaborated on the study, which was funded by a Canadian Institutes of Health Research grant.

Lead author Tillie-Louise Hackett, a scientist at the HLI and an associate professor at UBC, said in an interview that the study is the first to show “direct evidence” that there is already a substantial loss of small airway function in patients with mild COPD or those with lungs that appeared normal on the surface. The researchers drew an analogy to kidney disease in which there is substantial damage to the organ before symptoms arise. Even the small airways in the lungs are diseased by the time of a diagnosis of mild or moderate COPD.

“These data strongly support the concept that the small airways are the major and earliest site of airflow limitation in COPD,” the authors state, noting that a previous study had proposed a hypothesis — now confirmed in this study — that the small airways in the lungs “might represent a quiet zone within the lung where disease could accumulate over many years without being noticed.”

That is an important finding because, under current clinical guidelines, patients will not even be given symptom-relieving medications like bronchial dilators or inhaled steroids until they have more advanced disease.

“Most people are diagnosed in their late-50s after they have spirometry tests,” Hackett said, adding that the study has shown that since damage is occurring to vital structures of the lungs at a much earlier stage, experts should consider whether to start treatment earlier. She said while the study only involved 34 patients and must thus be considered preliminary, it may be time to consider whether those at high risk of COPD, such as smokers (up to 40 per cent of whom develop COPD), or those exposed to secondhand smoke, should be offered screening with respiratory tests.

Hackett said the reason why clinical trials into new COPD treatments have failed to show beneficial effects is that there was already too much lung damage in the patients enrolled in such trials. Patients with mild disease should now be enrolled in such trials, she said. “If the same drugs were tested on patients with more mild forms of the disease, and less tissue damage, the results could be very different,” she said.