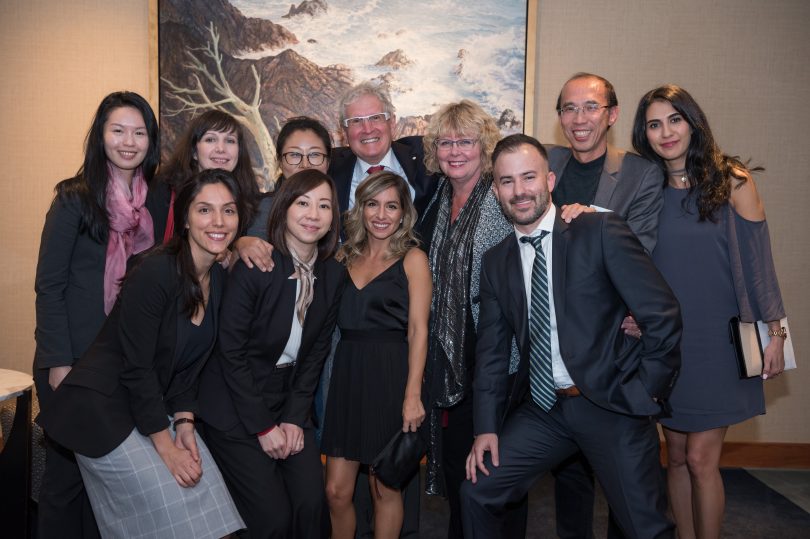 The work being done at the PROOF (Prevention of Organ Failure) Centre of Excellence is “not for the faint of heart,” says CEO Dr. Bruce McManus. “It’s a long and fascinating journey.”

It’s an important journey – one that could ultimately improve patient care through the development of sophisticated biomarker-based blood tests that can precisely predict, diagnose, forecast the course of illness, and help caregivers to manage and treat a range of diseases wherein vital organs fail.

Getting from A to Z is no simple task. Researchers must evaluate tens of thousands of molecules in the blood to discover “bio signatures” that discriminate patients with certain diseases from those without. This initial discovery is followed by a rigorous process of scientific study before the blood tests can be advanced into a clinical setting and eventually moved into the marketplace for widespread use. It takes many years and costs millions of dollars.

The unique PROOF research team is closer than ever to getting their tests into clinical practice. But they already have reason to celebrate because the road to get to this point has been paved with accomplishments that demonstrate why PROOF truly is a “centre of excellence.”

“To accelerate and complete the development of a number of biomarker signatures to get them into practical clinical use remains our major goal,” says Dr. McManus. “At the same time, in order to do that, we need to remain at the front-end of biomarker science in terms of data analytics and system science.”

As PROOF prepares to celebrate its 10th birthday with a special Anniversary Symposium on November 28, Dr. McManus reflects on the Centre’s remarkable last decade and the promising future ahead.

How it all started

To understand the origins of PROOF, we must go back more than 10 years.

The Centre traces its roots back to a large-scale translational research program first funded in 2004 by Genome Canada, in partnership with Genome BC and private sector partners.

“A group of us from across the city and across disciplines were funded to develop blood biomarkers that reflected acute and chronic immune rejection of heart, kidney and liver transplants,” Dr. McManus explains.

That project was called BiT (Biomarkers in Transplantation) and it served as a wellspring that brought together a multidisciplinary team of life scientists, clinicians, computational scientists, health economists, and trainees of various backgrounds.

After four years, the team had assembled the tools, techniques and strategies to tackle additional organ failure needs, and they applied to the highly competitive Networks of Centres of Excellence, Centres of Excellence for Commercialization and Research (NCE CECR) Program in 2007/08.

“We were among a small number of entities in the country that were funded as one of the new CECRs,” Dr. McManus recalls.

With a $15-million award, PROOF was established as a not-for-profit organization on April 1, 2008. It is co-hosted by Providence Health Care and the University of British Columbia, where Dr. McManus is a Professor in the Department of Pathology and Laboratory Medicine.

Having grown into an engine for data analytics and system science with the ability to navigate complex data sets, the newly minted PROOF Centre of Excellence expanded its focus beyond post-transplantation organ rejection.

“We moved upstream into the big populations of heart failure patients, COPD patients, asthma patients, and muscular dystrophy patients, and a number of other conditions,” Dr. McManus says. “We’ve been focused on the presence of risk, early detection or diagnosis, the forecasting of rapid or slow decline in organ function, and the response of patients to different therapies and management once they have organ failure.”

Fortunately, PROOF has been able to compete effectively for multiple rounds of funding from major organizations like Genome BC and CIHR, enabling the growth of expert capacity and collaborative potential.

Today the Centre’s primary objective is to develop blood tests that better predict, diagnose, manage and treat disease by harnessing the integrated power of clinical, molecular and computational science.

Several of the blood tests PROOF has spent years developing could soon see the clinical light of day.

“We have emerging plans for the activation of a private sector vehicle to commercialize and deploy several of our lead signatures that relate to heart transplant and COPD management,” Dr. McManus says. “Other programs will follow in behind these leads.”

Getting these tests into clinical use would be game-changing. A blood test is a far less invasive, less fear-evoking way to monitor for organ failure than the current alternative, a tissue biopsy. It’s also less expensive, more precise, and typically means less disruption and travel time for patients.

“It will not only reduce costs, reduce time and reduce emotional stress, it will also improve the precision with which we make either diagnoses or prognoses about patients with organ failure,” Dr. McManus says. “It’s an incredible multifactor benefit for the patient and for the health care system that is anticipated from the implementation of these tests.”

Beyond getting these tests into the clinical laboratory, a secondary goal of PROOF is to provide valuable information to the pharmaceutical and biotech industries to refine their approaches to the development of new drugs.

“We want to expand our value as an educational hub for different professionals who might benefit from the data analytics and system science expertise of the Centre, which is our core competence,” he says.

“They’re large, complex and require really advanced analytics in order to extract the value out of them.”

With their first blood tests close to commercialization and plans to expand their data analytics services, it’s an exciting time for PROOF. Through it all, though, Dr. McManus says he and his team never lose sight of their primary motivator.

“For all of the wonderful transdisciplinary scientific discourse and activity that’s involved, the real driver every day is the wellbeing of the patients.”