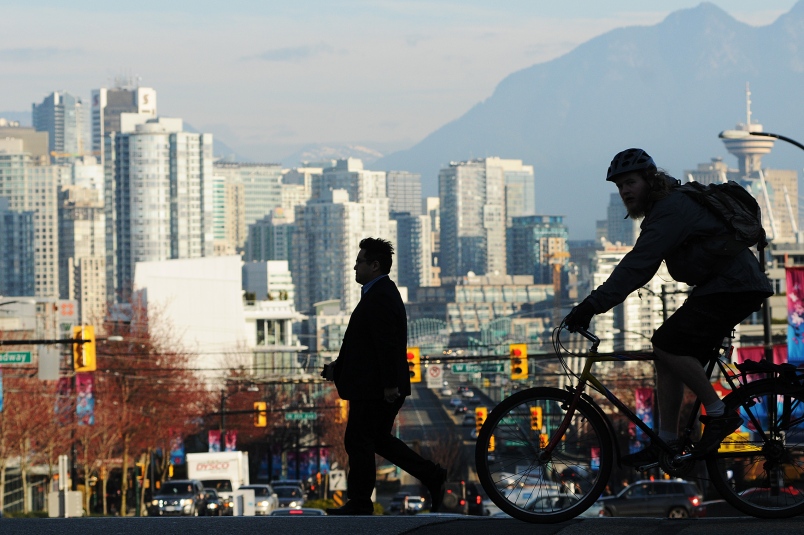 We may think of Vancouver as a healthy, active city, but diabetes impacts an estimated 7% of the population. Photo courtesy Dan Toulget, Vancouver Courier.

November is Diabetes Awareness Month, an opportunity to raise awareness about a disease which has reached epidemic proportions in Canada. A staggering one in three Canadians already live with diabetes or prediabetes, and another 1.5 million have undiagnosed diabetes.

It’s slowly and steadily impacting more and more Canadians, bringing with it a host of debilitating medical complications, including kidney failure, heart disease, and even early death. Yet Type 2 diabetes doesn’t seem to be a huge cause of alarm for many Canadians, which is frustrating for cardiac researcher Dr. Scott Lear.

The Pfizer/Heart and Stroke Foundation Chair in Cardiovascular Prevention Research at St. Paul’s Hospital speculates that people see Type 2 diabetes much like high cholesterol or high blood pressure, “While diabetes has poor outcomes, people don’t die of diabetes. They die of something else, such as stroke or heart disease, of which diabetes is a strong risk factor.”

The prevalence of diabetes in Canada is already about one in 10, and that’s expected to rise by an astounding 40 per cent in the next seven years. By 2025, about one in eight Canadians will have diabetes, with another quarter of the population dealing with prediabetes.

An aging population is one major factor, and the other is obesity. But Dr. Lear points out there is also a significant cultural divide, with South Asians and First Nations people hit the hardest. In the city of Vancouver, estimates show the prevalence of diabetes varies widely amongst neighbourhoods, depending on the socio-economic and cultural makeup. South Vancouver has an incidence rate (10%) almost double that of Vancouver city centre (5.6%).

By the time a person is diagnosed with Type 2 diabetes, the underlying health issues have actually been ongoing for years, says Dr. Lear, who is also a Professor in the Faculty of Health Sciences at Simon Fraser University. Physicians routinely conduct blood sugar tests to identify diabetes, but an elevated blood sugar is really just the end result of long term abnormal insulin levels.

As he explains, “It’s only when insulin can no longer control blood sugar levels that we see blood sugar rise. In the meantime, the elevated insulin can also result in creeping increases in blood pressure, inflammation and triglycerides.”

It won’t be easy to get the public to take the disease epidemic more seriously. Dr. Lear says the message is slowly getting out there with the increase in obesity rates, but he thinks we need more than just awareness. “Our medical system is organ-focused, not people-focused. Diabetes needs to be considered a ‘big’ disease, like cancer, and it needs to be known as a disease that is the foundation of many other diseases that will kill you.”

Dr. Lear is part of the Cities Changing Diabetes (CCD) initiative in Vancouver. It’s a global commitment to promote urgent action against urban diabetes by bringing together businesses, city leaders and planners, healthcare experts, academics and community leaders. “In Vancouver, we are looking at built environment. How does our community act as a barrier or facilitator to healthy lifestyle, and thus overall health and disease risk?”

One innovative project in Houston Dr. Lear believes could potentially be replicated here in Surrey’s South Asian community is a partnership between faith communities and health care providers. Members of various religious communities are trained to provide an evidence-based diabetes education curriculum, peer support and prevention programs in their houses of worship. The first class, which ‘graduated’ this spring, was a success.

Are you at risk of Type 2 diabetes? Take this two minute test and find out!