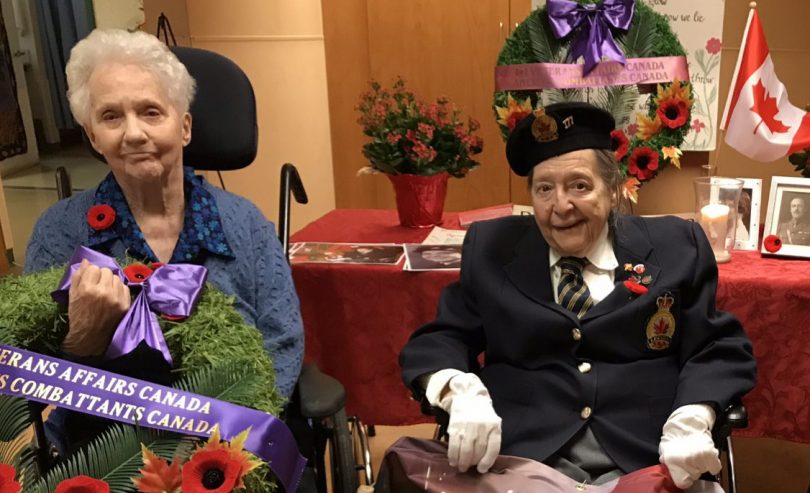 “You’re free, and you have this incredible freedom,” explains 86 year old Colleen. “The only thing that is holding you up there is the metal of the airplane.”

Penny grew up right next to an airfield in England and watched planes take off and land every day. The 94 year old says, “The feeling of being up in the air, looking out the windows, seeing all the people down below…that was what I loved.”

“I liked the Air Force blues”

This week, the two women, who are the last veterans remaining in Holy Family Residence, were joined by a third female veteran from the Rehabilitation Hospital for a special Remembrance Day service.

Geraldine Grimway is a rehab patient who also served with the RCAF during World War II. The 97 year old says, “Everyone was joining up. All the boys were gone. My girlfriend and I liked the Air Force blues so we decided we were going to wear Air Forces blues.”

Originally from Penticton, Geraldine served in Ottawa at Headquarters, as well as in Western Canada. She fondly remembers her time stationed in Vulcan, Alberta where the boys graduated with their “wings”.

Geraldine says, “I had one boy I liked very much. They sent him on a mission and the first flight out he got shot down. War is very sad. All these young boys, so many of them we lost.”