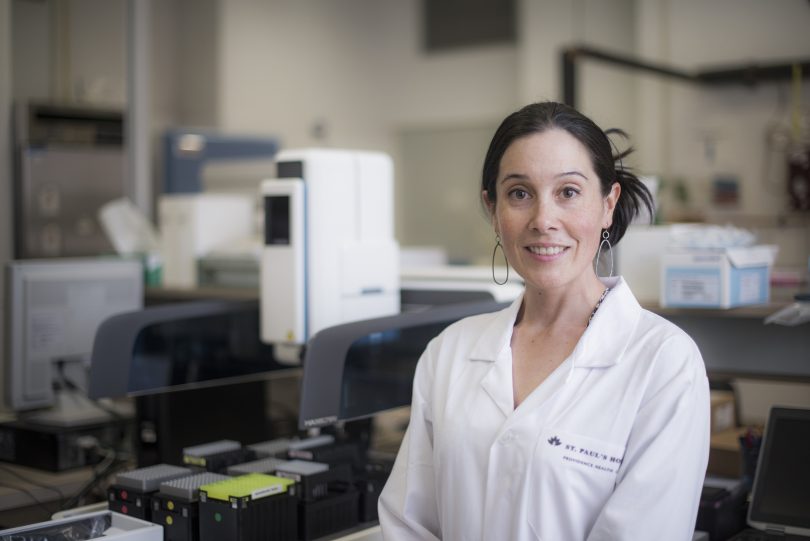 When Dr. Zabrina Brumme was in grad school, the idea of finding a cure for HIV was little more than science fiction.

“We thought that a cure would never be possible,” she recalls.

A little over a decade later, Brumme says cure research is at the forefront of HIV biomedical science research. It’s also one of her main focuses as Laboratory Director at the BC Centre for Excellence in HIV/AIDS at St. Paul’s Hospital. While the field is still in its infancy and a cure for HIV is not yet in sight, many people are now convinced it’s possible.

“We are actively working on it, and we believe that it will be feasible to achieve one day,” Brumme says.

The arc of scientific progress on HIV has been swift. The BC-CfE has played one of the most significant roles — from the introduction of highly active antiretroviral therapy (HAART) to Treatment as Prevention® (TasP®). Modern treatment now makes HIV a manageable condition. In the absence of a vaccine or a cure, TasP® is the best means of curbing the spread of HIV. This strategy involves expanding access to testing and the immediate universal provision of HIV drugs upon a diagnosis.

If treatment is so effective, what’s the drive to find a cure?

The gold standard in HIV treatment is HAART, which was first implemented in BC in 1996. BC-CfE Director Dr. Julio Montaner played a key role in the discovery of this lifesaving drug combination that dramatically changed health outcomes for people living with HIV. This HIV treatment suppresses the virus, but does not eradicate HIV from the body. Sustained treatment makes HIV a manageable chronic condition. But if an individual stops taking their medication, the virus will rebound and cause illness.

“HIV treatment allows people with HIV to live longer, healthier lives and prevents the transmission of HIV to others,” Brumme says. “These medications can be used as prevention in the form of PrEP; they can be taken by HIV-negative people at high risk of acquiring HIV to make sure they stay negative.”

However, taking medication every day for a lifetime has its downsides.

“The discovery of an HIV cure could eliminate the need to take medication every day. It could also help reduce persistent stigma and discrimination that affects people living with HIV who need to stick to a strict drug regimen,” Brumme says. “We think it’s really important to work towards this goal.”

To add to this, on the global level, a cure would be profound for people living with HIV in parts of the world where lifelong treatment is not readily available or prohibitively expensive.

But wait, didn’t we already cure someone?

Timothy Brown, also known as the Berlin Patient, is thought to be the only person ever cured of HIV. The HIV-positive man was diagnosed with leukemia and underwent a stem cell transplant. His bone marrow donor was not only a tissue match, but also harboured a rare genetic mutation that provides resistance to HIV infection. Ten years after his transplant, Brown remains off antiretroviral therapy and is free of detectable HIV.

When news of the Berlin patient broke, Brumme was completing her post-doc and says the medical triumph energized the field. The very risky, expensive and intensive procedure by which Brown was cured has not been replicated with the same success. Still, the case revealed critical clues about what it takes to eradicate the virus.

A point of clarification: scientists are actually working towards two types of HIV cure. A “sterilizing cure” refers to the complete absence of HIV in the blood (i.e. someone who was HIV-positive becomes HIV-negative); and a “functional cure” (a.k.a. HIV remission) refers to the state whereby an HIV-infected person can discontinue their medication without risking a viral rebound.

So, do researchers have any leads?

HIV can persist in a dormant state for years and these latently infected cells (or viral reservoirs) are the main barrier to cure. Recently, BC-CfE researchers developed a method to “date” HIV strains in the body, thereby showing how long they had survived in the HIV reservoir. This study showed that HIV strains can persist in the body for decades. An HIV cure would need to eradicate the different strains of HIV that live in the reservoir. Researchers worldwide are pursuing several strategies to get at these cells and achieve HIV cure or remission.

There’s the two-pronged “shock and kill” approach. First, a therapeutic agent is administered to encourage latently infected cells to start producing viruses. Then the immune system is stimulated to kill all the infected cells.

The opposite of this is the “block and lock” approach, which seeks to keep the viral reservoirs in a permanently latent state, resulting in HIV remission.

Gene therapy is another major cure strategy. Inspired by the Berlin Patient, researchers are investigating ways to cut HIV out of latently infected cells, or engineer cells to be resistant to HIV infection.

There have been studies with promising results in all these areas. As of yet, nothing so ground-breaking to suggest a cure is on the immediate horizon.

How is the BC-CfE contributing to cure research?

Researchers with the BC-CfE are working on three broad aspects of HIV cure research.

The first is to characterize the latent HIV reservoir in order to understand the pool of hibernating viruses: How big is it? What are the genetic variations? Where in the body does it reside?

“If we want to cure HIV, we have to get rid of all these hibernating copies of viruses that reside within people’s bodies,” Brumme says.

Second, BC-CfE researchers are working in collaboration with partners at Simon Fraser University (SFU) on strategies to boost immune response against HIV.

The third aspect, also a collaboration with SFU, involves discovering new compounds that have “shock” or “lock” properties and thus could be used to advance “shock and kill” and “block and lock” approaches.

Ultimately, HIV cure research is still in the test tube stage. When a cure does become available, Brumme expects it likely won’t be one-size-fits-all, but rather a personalized approach involving a combination of strategies. In the meantime, the international journey towards a cure will involve scientists, health care providers and members of the community working together—creating a strong model for research that can be replicated in other health areas.

“It’s a real opportunity for deepening the partnerships between scientists and non-scientists as we move forward to make new discoveries,” Brumme says.

OK, so there’s no cure, but HIV isn’t a big problem anymore, right?

Wrong. While great strides have been made since HIV was discovered as the cause of AIDS in 1983, it is still a significant health care issue that demands attention.

“HIV is very different than it was at the beginning of the epidemic thanks to the development of medications to treat HIV, but it’s not a solved problem by any means,” Brumme says.

There are still more than 37 million people worldwide living with HIV. Stigma and discrimination continue to surround the epidemic. In BC, there are an estimated 12,000 people living with HIV. New cases have drastically declined, due to the implementation of the Treatment as Prevention® strategy, but we are still seeing new cases.

It is critical to continue to reach out and test for HIV, as well as engage individuals on sustained care. It is important to provide access to prevention for high-risk groups and to continue with funding for treatment and research. Altogether, this will move us towards health care sustainability.

“It’s important to ensure people understand that HIV is still a major issue. We cannot afford to become complacent about HIV,” Brumme says. “HIV is still with us and, as long as this is true, we need to keep up the fight.”

World AIDS Day is Saturday, December 1. It’s an opportunity for people worldwide to unite in the fight against HIV, to show support for people living with HIV, and to commemorate those who have died from an AIDS-related illness.