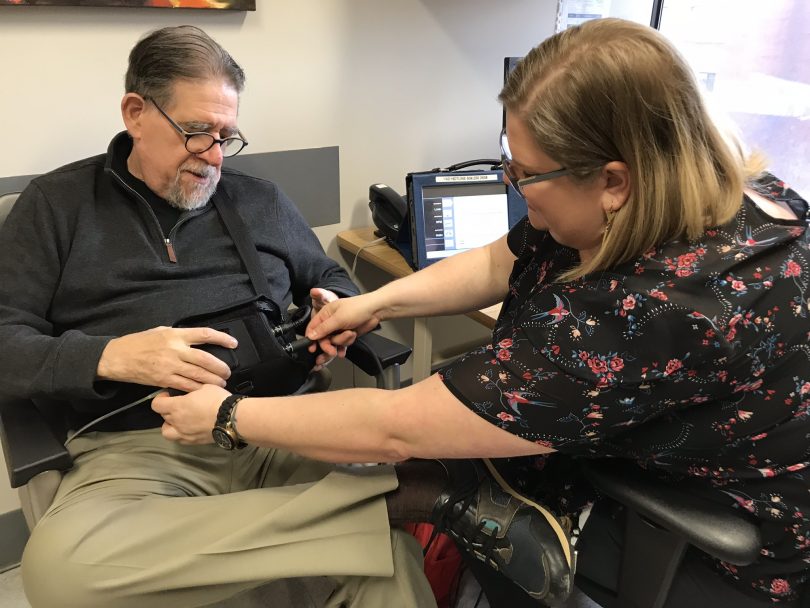 You probably wouldn’t even notice the small black bag slung over Scott Wilson’s shoulder, but he never forgets it’s there.  The device tucked inside is keeping him alive. It’s a ventricular assist device, also known as a VAD, and it is essentially a mechanical heart pump. The 67 year old from West Kelowna says, “It’s really not a big deal at all. The trickiest thing so far is clasping the car seat belt over it because it needs to go in your lap.”

The ‘simple’ device has now saved 200 lives in BC since 2002, the start of the VAD program at St. Paul’s Hospital. Clinical nurse specialist Annemarie Kaan remembers it wasn’t very simple at all in those early days, “VADs were large and clunky, the size of a fridge. Patients had to push around a large unit that kept it pumping.” These first-generation devices weren’t just inconvenient, they also came with higher risks of strokes. The new units, such as the one Scott wears today, are not only smaller, they also come with fewer complications.

Dr. Mustafa Toma, program director of the Advanced Heart Failure program, says this milestone would not have been possible without the trust of patients and their families in this technology and the team. “The dedication of our entire multi-disciplinary team – cardiac surgeons, transplant cardiologists, nurses, dietitians, social worker, psychologists, spiritual and ethical care staff – has been instrumental in getting us here.”

Scott’s journey to a VAD started more than 20 years ago with a diagnosis of dilated cardiomyopathy. Medication and an implanted defibrillator kept it under control and he continued working at the Toronto Symphony Orchestra without incident, eventually moving to the Okanagan a few years ago. All of a sudden in June, he had several electrical storms, a life-threatening syndrome that involves recurrent episodes of a critical heart rhythm problem called ventricular tachycardia. He recalls the shocks to his heart provided by an implantable defibrillator “It felt like a lot of mule kicks to the chest.”

The French horn player was actually in Ontario visiting his son and newborn twin granddaughters at the time. He ended up spending most of that week in the hospital getting his medication adjusted. But a few days after returning home to BC, his heart kicked into tachycardia again with another shock. This happened twice in just a couple of weeks so he was flown down to St. Paul’s Hospital for a procedure to cut the nerve in the heart causing the tachycardia (called an ablation).

On the second day of the procedure, July 27, things went terribly wrong and he had a cardiac arrest on the table. Scott underwent emergency surgery to implant a VAD, “I had no idea what was happening. I was essentially unconscious for six weeks.” Sadly during that time, his wife died from cancer, and when he finally woke up, he had to deal with his grief and this new device implanted in his heart.

A visit from his granddaughters helped turn things around, and Scott was released from St. Paul’s in October with his new mechanical heart. “I just feel like the same old guy. There are some procedures to learn and precautions I need to take, but I have been wonderfully supported by family and the team at St. Paul’s.”

Erica Johansson, patient and nurse educator, has watched Scott, and dozens of other patients, go from near death back to life. “I am in a special position where I see them at their sickest then get to observe the journey they go on to being well again. We try to bring patients back to the cardiology ward to visit the nurses that looked after them for weeks at a time when they were so ill. That is a really special thing to see.”

Waiting for the gift of life

For now, VADs are only implanted as a “bridge” to transplant in BC, which can be a wait of several months or even years. As Annemarie Kaan explains, “All of our VAD patients would likely have died while waiting for a heart transplant. The VAD gives them a chance.” Prior to the start of the program, up to around 20 percent of patients died while on the wait list. Now that death rate has come down to virtually zero.

It is still a big commitment for patients and their families with many potential risks, and the decision to implant a VAD comes only after a rigorous assessment process. One in five patients die while on the VAD, but as technology improves, the hope is devices will become even smaller and safer. In other parts of Canada and other countries, for various reasons, some patients live out the rest of their lives on a VAD. Some of these patients are now approaching 10 years with their devices.

Scott Wilson is coming to Healthy Heart twice a week so he can get strong enough to get listed for a heart transplant. He is driving again, living independently with a little help from family and friends, and going out for regular walks. While he is well aware of the risks, he’s absolutely okay with it, “I think it’s the very best and only alternative.” Scott says with a grin, “It’s keeping me on the correct side of the ground!”

How does a VAD work?

The ventricular assist device, or VAD, is an artificial pump that is used to treat severe heart failure. It helps pump blood from the heart to the rest of the body. A VAD is surgically implanted in the chest with the electrical components carried outside the body via a wire exiting the skin. The pump part of the VAD used in BC is placed in a small space next to the heart.

More information on VADS can be found here.