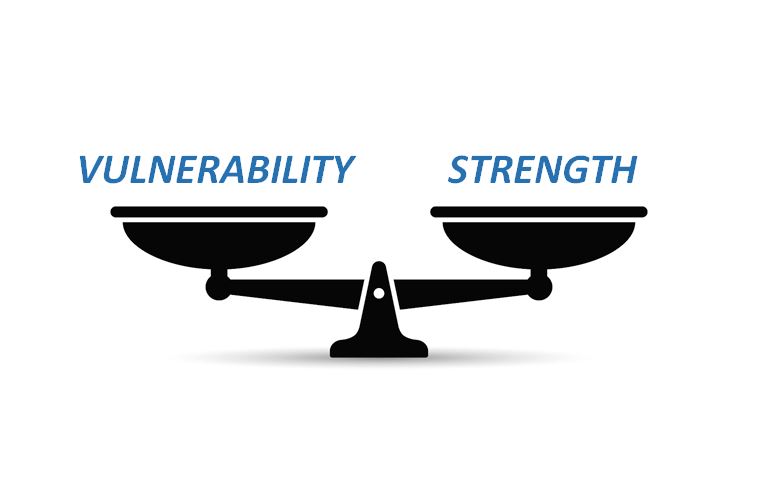 Is there strength in being vulnerable?

Even though we often don’t do it, there are lots of signs to encourage us to be vulnerable.

The other week I saw a cardiologist who specializes in the electrical pacing of the heart (this keeps the heart beating or if not working well, leads to irregular heartbeats and palpitations). I saw him as my palpitations with exercise had been re-emerging. This happened even though I was taking my beta blocker meant to stop them.

It was in the summer when I was doing a bike ride up one of the local mountains. My heart was beating so fast, it wasn’t pumping any blood. My legs felt like lead as they were starved for blood and oxygen and I slowed down until my heart stated beating normally again.

As soon as it happened, I thought I should tell my cardiologist. Although I was hesitant. I knew he would want me to either increase my beta blocker dose or get an ablation. Given the potential down sides of increasing my beta blocker (possible fatigue, difficulties with exercise), I chose to learn more about an ablation.

The electrical cardiologist explained the ablation procedure is an invasive procedure in which the heart cells causing the palpitations are killed. Ouch! He went on to say it has a high chance of success with a low chance of failure. Sounds like a slam dunk, right? Yet I’m still on the fence about it.

I consider myself to be an educated and rational person, who should be able to make well-informed decisions about my own care. I counsel enough other people on their health, so this should be easy. But I’ve been anything but rational when it’s come to my heart condition.

I’ve been experiencing palpitations for years and it was only last year I did anything about it. Sure, early on they were happening only once every few months but over time they increased until it was happening nearly every time I was exercising. Fortunately, they aren’t life threatening. Uncomfortable, yes.

I must point out I haven’t had a heart attack, my heart isn’t damaged and I’m not looking at the prospect of someone cutting open my chest and doing a bypass. An ablation is a catheter that is snaked through my groin to my heart. So there are definitely people who have more onerous conditions and decisions ahead of them than I do.

I’ve spent a lot of time thinking why I initially delayed seeking treatment and now feel hesitant about making a decision about the ablation. It’s not just about delaying seeking treatment, I never told my wife about my palpitations. Maybe because she would do what any person would do and tell me to go see a doctor. The same advice I would give to a friend or family member.

We could chalk this up to being a guy and not wanting to admit something is wrong or trying to tough it out for himself. But women also delay seeking treatment.

No, there’s something more to it than that. Maybe it’s the case where we’re afraid that something really is wrong with us? Thinking that if we don’t get a diagnosis, then everything must be fine. Perhaps it’s a case where we’re concerned no one will listen to us or we fear being told it’s just in our head. Maybe we don’t want to worry anyone and have people make a fuss over us.

All of these reasons are possible and while each of us may have a different reason for delaying seeking care, there is this underlying theme of vulnerability. It’s more than the idea of us being weak, it’s about realizing we may not be perfect, no longer invincible or able to manage everything that life throws at us.

We all get colds and flu, and have no problem going to the doctor then. Perhaps because we see this as normal and know that it will pass, but something like heart disease, cancer, diabetes? Well then a lot of us spend time playing mental ping pong over whether to do anything about it. Will this condition define me? Will it limit my life? Will others think less of me because of it? Does it mean I might die soon?

But as humans we are vulnerable, both physical and mentally. We get hurt easily, our emotions can get the better of us. Some might say we’re fragile. This is what makes us who we are. We probably all know rationally that sharing our feelings will make us feel better and perhaps even stronger. It can strengthen the bonds among those we care about. Yet we don’t rush in to do that.

What holds us back is that fear. The fear of the unknown. The fear of putting ourselves out there. It’s like showing your cards first at the poker table without knowing what everyone else has. Or saying I love you to someone for the first time. Will that person say it back or laugh in our face?

One thing I’ve learned in the past couple of years is the power of vulnerability (I recommend watching this TED Talk). I wouldn’t say I’ve mastered it, but there is a lot to be gained from putting yourself out there. The biggest one can be it helps us to learn about ourselves.

Even though we often don’t do it, there are lots of signs to encourage us to be vulnerable. The saying that we learn more from our failures than our successes, speaks to vulnerability. Or when people say you don’t learn anything if you don’t risk anything. It doesn’t have to be getting up in front of thousands of people and baring your soul. It could be as simple as sharing what’s going on with your family.

There is even vulnerability in writing this blog and sharing my thoughts with the world. When it comes to the more research-type writing, I have no problem. I can write as some sort of detached robot but when it came to stories that cut closer to home such as my Father’s Day article, well that was more difficult and more draining. Yet, those articles are the ones that have had the most readership.

I don’t think it’s because people like to hear how others fail or their emotional challenges. Or even that misery loves company. I think it’s because we want to be moved, we want to feel something, we do want to know that we’re all human. We want to know that everybody, no matter how successful, how knowledgeable or how much money the person has, we all face challenges, we all fail and we all have vulnerabilities. And it is the vulnerability, which can actually give us strength.

Dr. Scott Lear is a Professor of Health Sciences at Simon Fraser University and holds the Pfizer/Heart and Stroke Foundation Chair in Cardiovascular Prevention Research at St. Paul’s Hospital.

This story originally appeared on Dr. Scott Lear’s blog, Feel Healthy With Dr. Scott Lear. Check it out and be sure to subscribe for more content.