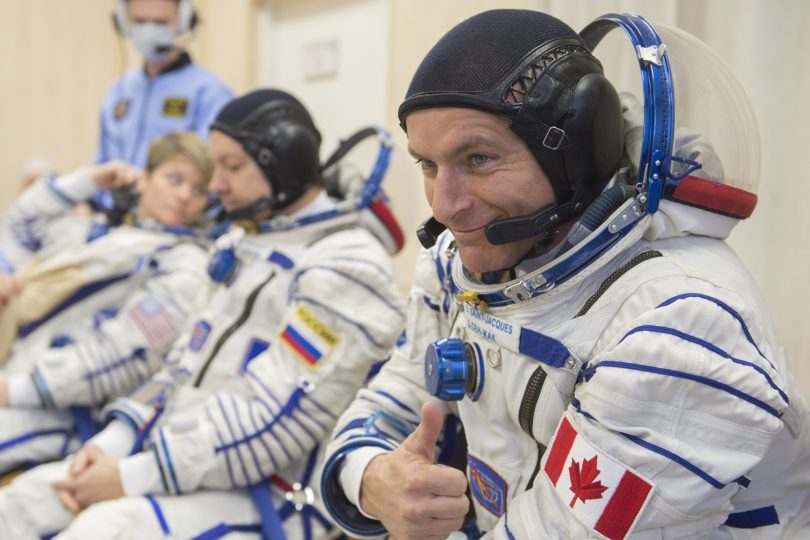 On December 3, Canadian astronaut David Saint-Jacques blasted off for a six-and-a-half month mission aboard the International Space Station. When the engineer, astrophysicist and physician returns to Earth, he will be a changed man…literally. Space travel is tough on the human body – weightlessness, radiation exposure, isolation and confinement – and it affects many different systems.

NASA’s Human Research Program was launched more than a decade ago, specifically to study ways to make space travel safer, especially as future missions to Mars will involve greater distances and extended stays in space. During his mission, Saint-Jacques will be conducting several health-related experiments, including risks of space radiation, effects of microgravity on bones, and a study on heart health called Vascular Echo.

Heart ages 10 to 20 years during six months in space

This study, led by a Canadian research team, follows previous experiments on board the ISS. Those results showed astronauts’ cardiovascular systems can age by up to 10 to 20 years during a six-month space mission as some return with stiffer arteries. The eventual goal is to figure out what treatments might prevent this during space travel and on Earth.

Dr. Sean Virani, head of Cardiology at St. Paul’s Hospital, finds the impact of space on the heart fascinating. Since his specialty is heart failure, he is most interested in the structural and functional changes that happen in the absence of gravity, “Space is basically an accelerated lab for heart failure. The way our heart and blood vessels work is largely based on gravity.”

Even the shape of the heart and the way it hangs down in the chest cavity is attributed to gravity. In space, it becomes less bullet-shaped and more ball-shaped.

Another example Dr. Virani gives is the blood vessels in our legs, “Typically with gravity, blood runs to our feet and our vessels are trained to be muscular and really squeeze, fighting against gravity, to get blood back to our heart. In the absence of gravity, that all goes away.”

While a few of the changes seem to last even after returning home, such as stiffening of the arteries, many of the changes are reversed once back in gravity. “I am impressed by how dynamic the cardiovascular system is, and how plastic it is in a healthy person. It can endure significant stressors and still find its way back to health.” Dr. Virani is excited to see how research in space might eventually help heart patients on Earth.

David Saint-Jacques will also be part of an ongoing study examining how astronauts adapt mentally and socially to life on the ISS. This is Canada’s first psychosocial experiment, led by a team at UBC.

Isolation and confinement have huge impacts on health, according to St. Paul’s psychiatrist Dr. Harpreet Chauhan, “You aren’t able to do things you normally do to help yourself cope or deal with stress.”

The head of Psychiatry at Providence Health Care equates the isolation of astronauts in space to that of seniors who are housebound, or people confined to bedrest due to medical issues. “You start to feel down, you get anxious, ruminate about physical ailments. Many people get irritable, they have trouble sleeping, which perpetuates more negative thoughts and more health problems.”

Astronauts get strenuous training in advance of their missions to help prepare for the mental challenges of a long absence from life on Earth and the study will look at strategies that work.

Dr. Chauhan believes those findings could potentially be adapted for others living in remote environments or cooperative living spaces such as nursing homes, or dealing with isolation. “What really works? Social interaction? Or having a structured day? Is there a difference between a phone chat or video chat? Do you need five interactions a day, or is one interaction a day sufficient?”

A busy six and a half months

With 300 ongoing experiments on the ISS, the crew will be extremely busy during their mission. During a final briefing with media last week, Saint-Jacques said one of his biggest fears is that he will become so focused on all the tasks he has to do while in space he will forgot to pause and really take in the experience. So he says at the top of his non-research list: finding time for a 90-minute continuous viewing of the Earth from the station.