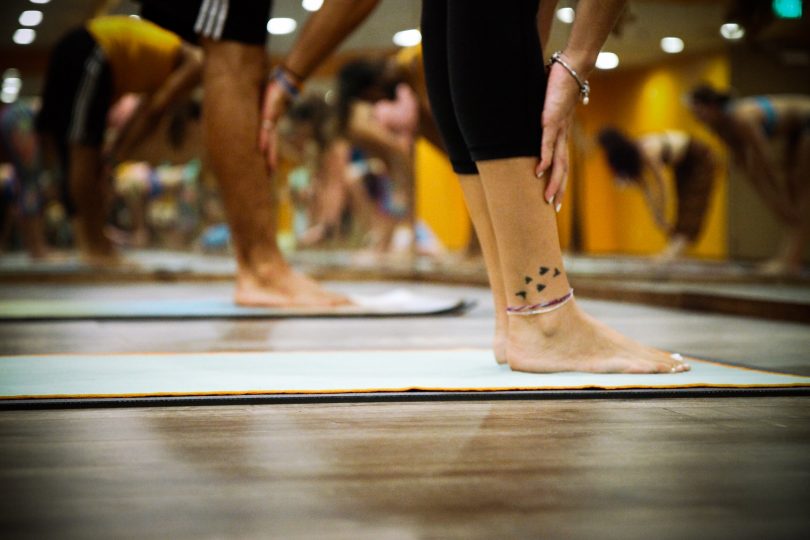 Yoga is gaining momentum as a therapeutic option for people with various physical and mental health issues and new research suggests its benefits extend to youth who have experienced trauma.

A research team, led by Sarah Cochrane, Nurse Practitioner at Foundry Vancouver-Granville, found young people with diagnoses of depression, anxiety and/or post-traumatic stress disorder (PTSD) saw positive results from participating in an 8-week trauma-sensitive yoga (TSY) program. The trauma-sensitive yoga model was developed at the Trauma Center at Justice Resource Institute in Brooklyn, Massachusetts, as an adjunct treatment for complex trauma. Previous studies have pointed to its beneficial effect on adults, but little was known about its effect on youth.

“We know that trauma profoundly affects the body, and so it doesn’t make sense not to bring the body into treatment and healing,” she says.

Her team’s research showed that yoga helped participants reduce and manage anxiety, helped with chronic pain, increased mindful awareness, and helped with structure and routine in their life. Based on these encouraging results, Cochrane is now hoping to roll out trauma-sensitive yoga as an adjunct treatment option across Foundry’s network of youth wellness centres in BC.

Funded in the Providence Health Care Practice-Based Research Challenge, the study recruited 14 youth with depression, anxiety and/or post-traumatic stress disorder (PTSD) for an eight-week yoga program in 2017. Classes took place at Foundry Vancouver-Granville and were led by a certified yoga instructor with additional training in trauma-informed yoga.

There are a number of ways to make yoga classes safer for trauma survivors. Class sizes are small, participants always face the exit, the instructor uses verbal cues rather than physical assists and does not circulate the room. The emphasis is not on the aesthetics of alignment, but rather safety, awareness and staying present in the body.

“Predictability is a big piece of trauma-informed yoga,” says Cochrane, who herself is a yoga instructor. With that in mind, the group is closed so participants know who will be in the space each session, and every class follows a similar sequence.

Participants are encouraged to listen to their bodies and not attempt anything that doesn’t feel right. The yoga movements also take the experience of trauma survivors into consideration. For example, a posture that’s more likely to be triggering for someone who has been sexually abused, such as certain hip-openers, are avoided, especially early in the program.

Rather than telling participants what to do, the instructor uses invitational language, introducing new movements with phrases such as “If you would like,” “I invite you to” and “As you are ready.”

“A lot of people who have experienced interpersonal trauma have had choice taken away from them and trauma-sensitive yoga is all about empowering people to make choices and feel like they have agency,” Cochrane says.

‘I’m more aware of my body’

Following the eight-week program, participants reported feeling more aware of themselves and others, they were better able to relax their bodies and minds, and many started using the breathing techniques learned in class to calm down when feeling anxious. The following are quotes from participants:

“I think it’s affected my mental health greatly because I use the breathing technique when I’m out and about and it helps my anxiety. It’s helped my depression. When I’m upset, I will do the same thing. I will sit in a seated position and breathe. I mainly use the breathing technique and the seating position. It’s just affected me very positively”

“It’s allowed me to process my emotions more consciously and less reactively, and having a regular practice helped me to step outside myself while I’m experiencing internal emotions coming up. And being able to process them in a way that’s more communicative with people and transform into a more healthy reaction instead of being more volatile”

“I noticed that I’m more aware of my body. Before, due to my trauma and stuff, I was like—I don’t know how to explain it. I’m just more in tune with my body and how I am right now. Like before, I kind of wanted to escape my body and–obviously there’s other things I’ve been doing, but this has really helped me pay attention to my body more…before… I was kind of numb and running away from my body. It made realize that this is your body and this is how it is and you can’t run away from it. This is who you are”

Foundry Vancouver-Granville has partnered with Yoga Outreach, an organization that supports adults and youth through trauma-informed yoga programing within community service facilities across the province. With a vision of implementing trauma-sensitive yoga across Foundry’s sites, Cochrane is hoping this partnership will continue to grow.

“I think it’s important to offer young people options in their treatment, and this is another strengths-based approach to mental health that we can provide,” she says.