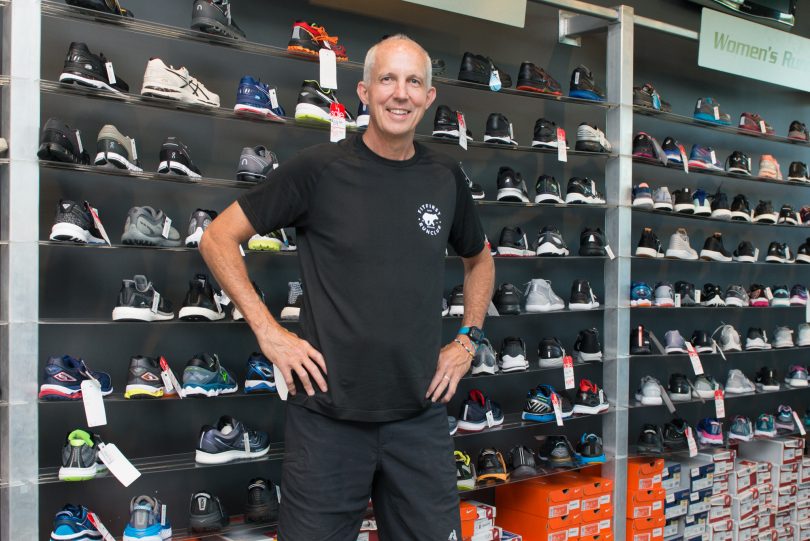 Phil Moore's father died with Alzheimer's, making him wonder about his own risk of getting the disease.

Imagine if one of your parents was diagnosed with Alzheimer’s disease.

What would that mean for your own risk of getting the disease – and what would you do?

With more than half a million Canadians currently living with dementia and that number set to almost double within 15 years, this will be a reality many families are likely to face.

No stranger to this scenario is Phil Moore, owner of Ladysport, a 36-year-old Vancouver institution renowned for its specialization in athletic wear and shoes for women. He lost his father, Ted Moore, in 2002, after a diagnosis of Alzheimer’s disease two years earlier. Moore’s paternal grandfather had also suffered from dementia in old age so his father was aware of what was happening to him. Moore said his father Ted initially disguised it well as dementia patients tend to do.

Father had mind “like a steel trap” before Alzheimer’s, says son

Moore’s father, a former world traveler and manager at Shell Oil, had previously had a mind “like a steel trap” and loved family discussions and the game of Bridge. However, he soon could no longer participate in the activities he loved. Moore eventually had to place his father in an assisted care home in Toronto, where he passed away.

“My father was in his 80s and scared of Alzheimer’s because of what his own father had gone through,” said Moore.

According to Dr. Harpreet Chauhan, geriatric psychiatrist and head of psychiatry at Providence Health Care (PHC), a family history of Alzheimer’s disease poses a definitive risk for developing that type of dementia.

She adds that other risk factors that run in families – such as diabetes, heart disease and depression – can put one at higher risk for both Alzheimer’s and vascular dementia. She discusses risk and prevention with families, focusing on controlling cardiovascular risks through exercise, diet, and treating high blood pressure, diabetes, cholesterol, and heart disease.

“Because the mechanisms of development of dementia are multifactorial and not fully understood, no one test can specifically tell you if you will develop dementia or Alzheimer’s disease,” said Kow.

Genetic screening tends to be done on people with a very strong family history of earlier onset dementia.

Genetic screening done only after much thought

“Genetic screening is not done without careful consideration. For those who are interested, we refer them to the Alzheimer’s and related disorders clinic at UBC where professional genetic counsellors review the need for testing and counsel clients on the benefits and risks of going forward with testing,” added Kow.

Depending on the situation, many people opt not to do genetic testing even if they qualify. Only those who feel that knowing the results would benefit them should choose to undergo it. For example, they may have anxiety regarding the future or simply wish to plan ahead.

Neither Moore nor his siblings have been offered a genetic test to determine if they will develop Alzheimer’s disease. However, it is something he thinks about and has adopted some strategies just in case. His wife works in health care and makes sure to include certain foods in his diet that are known to be helpful.

But foremost for him are the proven benefits of exercise.

“Exercise has always been a big part of our lives and continues to probably be the most consistent and enjoyable strategy for battling this nebulous disease,” he said.