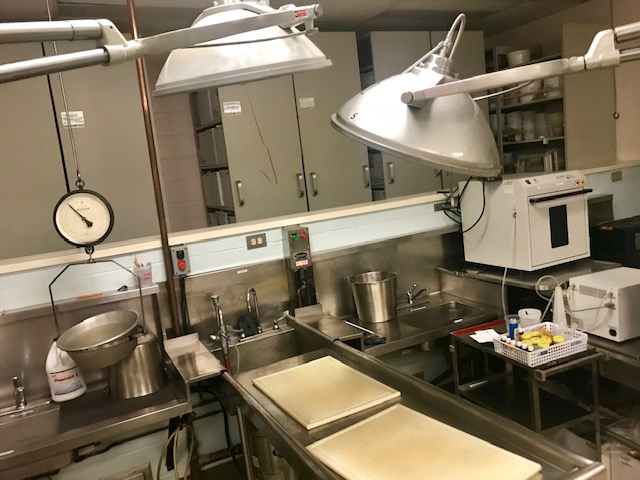 While often unseen, a hospital’s morgue bears witness to the timeline of a community, chronicling its outbreaks and crises, supporting its evolution of cultural humility and competence, and serving as a resting place for those who have passed away.

It’s an important history to capture. And, for the morgue at St. Paul’s Hospital, a lot of remarkable things have dotted that timeline.

The morgue has seen the devastation of Vancouver’s AIDS epidemic in the ’80s and ’90s, steeled against public health emergencies and potential viral outbreaks, and plays an all-too-consistent of a role in the opioid crisis that our city and province is currently facing.

“Often you come through the front door of St. Paul’s feeling hope and aspiring for wellness,” says Bobby Grewal, team lead, Anatomic Pathology. “But it’s through the back door of the hospital that there’s recognition of what we’re here for – supporting the life and death of those we serve.”

Logistically, when someone dies within the hospital, the morgue is notified and a porter is dispatched. Caregivers prepare the body, formally release the patient and notify the family, who begin to make arrangements for their loved one. Using a gurney designed for morgue transfers – meaning that there is a canopy to provide additional coverage to ensure dignity and anonymity – the porters carefully navigate through the hospital, trying to use as few of the main hospital thoroughfares as possible to bring the departed to the morgue, which is located in the basement of St. Paul’s. Once the paperwork at the morgue is complete, the person is transferred into the morgue’s care.

A person’s culture, tissue donation wishes and, occasionally, cause of death will dictate what happens from there. Certain communities require special ceremonies or traditions to be carried out.

“We recognize the importance of people being able to be memorialized in a way most-fitting with their beliefs and culture and are reviewing policies/procedures to find ways to respect the different cultural practices and community’s wishes. It’s very thought-provoking and engaging conversation for everyone,” says Grewal.

Depending on the circumstances around someone’s death, an autopsy may also be requested by the team who cared for them.

“The need for an autopsy is decided on the ward. The team might be interested in more answers for any number of reasons,” says Grewal. “Before all of the therapies we have now were discovered to manage chronic diseases and things like HIV, these types of deaths were totally warping our idea of what we thought we knew. What was the cause of death? What was this infection? How do we care for these folks? There was such a determination to find answers and gain medical knowledge around why these deaths were happening. I think through that perseverance, we were able to ease the stress that came along with treating something so unfamiliar.”

As a teaching hospital, St. Paul’s looks at an autopsy as an opportunity to further investigate a possible cause-and-effect that wasn’t caught initially and use its findings as a catalyst for practice change.

Grewal can still remember the first autopsy he ever conducted some 15 years ago, which happened at St. Paul’s where Grewal started his career as a medical technologist. At that time, the morgue had a viewing gallery where physicians and residents could sit and learn. This has since been removed to accommodate a growing tissue bank collection.

“A patient had passed away after a heart transplant and I was asked to participate as a young technologist,” says Grewal. “The pathologist performing the autopsy loved an audience and the entire cardiac team had gathered in the gallery. As he talked through it all, I was having to make all of the incisions in front of this full auditorium. I remember so clearly, the surgeon who had performed the transplant came into the morgue and leaned his chin on my shoulder so that he could peer over and see his work and understand what, if anything, may potentially have gone wrong. It was powerful to see how invested he was.”

In addition to the history a morgue holds of the stories a hospital has seen, it’s also a place of great transformation for those working in it.

“It’s quite remarkable when you lay your hand on someone who’s passed away. An absence of a spirit is as much something you feel come through your own body as you can feel the vibrancy of someone who is living,” says Grewal. “That transfer of energy isn’t something you train for, and it changes you.”