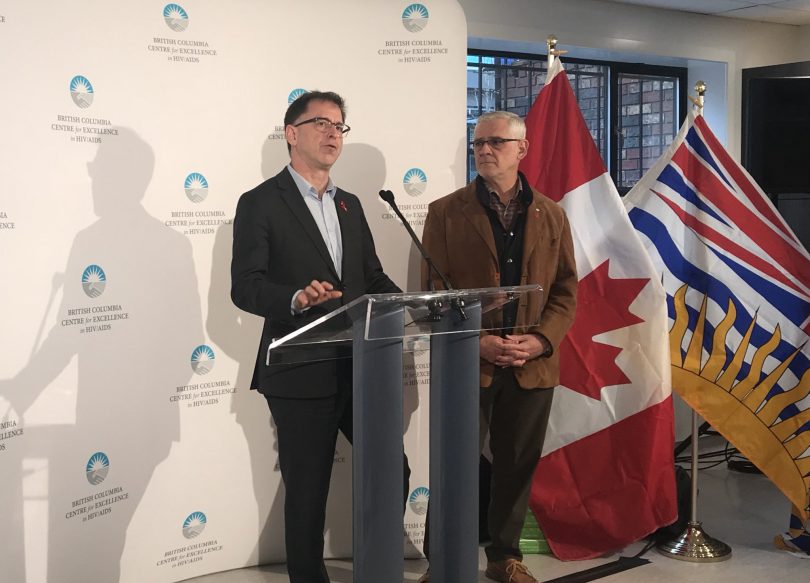 On the occasion of World AIDS Day on Dec. 1, 2019, British Columbia marks record-low cases of HIV and AIDS as the crisis transitions from epidemic to chronic disease management.

“As we commemorate World AIDS Day, it’s important to look to the progress we have made against a formidable disease,” said Adrian Dix, Minister of Health. “With the success of the Treatment as Prevention strategy (TasP), B.C. is seen as the having the world’s gold standard to profoundly reduce HIV transmission and transition the crisis from a serious epidemic to a manageable chronic disease.”

The B.C. government has long been a pioneer in addressing the health of people with HIV and AIDS by offering the groundbreaking TasP, developed by the BC Centre for Excellence in HIV/AIDS (BCCfE).

On #WorldAIDSDay #BC marks record-low cases of #HIV & #AIDS as the crisis transitions from epidemic to a manageable chronic disease. W/ the success of @bccfe developed #TasP strategy BC is seen as having the world’s gold standard to reduce HIV transmission https://t.co/jWOoFpW2nH pic.twitter.com/sspE7G5HS5

“Since the first AIDS patients presented to St. Paul’s Hospital in Vancouver – struggling against stigma and marginalization – community, researchers and clinicians worked tirelessly to advance evidence-based research to inform B.C.’s HIV treatment policies,” said Dr. Julio Montaner, executive director and physician-in-chief, BCCfE. “This included pioneering effective treatment and supporting widespread availability of antiretroviral therapy. We are now reaping the rewards of this province’s continued commitment to provide the best possible treatment and care for those living with HIV as we set a standard for the rest of the world.”

“Since the turn of the century, we’ve made incredible progress in our fight against HIV and AIDS,” says Dr. Bonnie Henry, provincial health officer. “Research conducted by Dr. Julio Montaner and his team at the BCCfE has accelerated our efforts to reduce the impacts of what was once a death sentence, and this work has been crucial to the progress of not only our provincial efforts, but efforts around the world to end HIV and AIDS.”

To further advance the goal of eventually eliminating the disease, the BCCfE has established a research laboratory at 647 Powell St. in Vancouver to support ongoing HIV/AIDS research for people living in Vancouver’s Downtown Eastside and beyond. Together with other programs of the BCCfE, this new laboratory works to support people living with HIV/AIDS, while also collecting vital research to establish innovative new techniques to eliminate the disease.

Helping to prevent the transmission of HIV, government expanded public funding for pre-exposure prophylaxis (PrEP) and post-exposure prophylaxis (PEP) on Jan. 1, 2018. As a result, approximately 4,500 people at higher risk of HIV infection have qualified for coverage of this potentially lifesaving treatment, adding a new resource to the centre’s TasP. This is an increase from 2,000 in June 2018 and 3,300 in March 2019.

The Province’s STOP HIV/AIDS program receives approximately $20 million of annual funding. Separately, government supports a three-year, $322-million contract with the BCCfE for the delivery of the HIV Drug Treatment Program, including HIV PrEP.

Read the full Government of BC news release here.