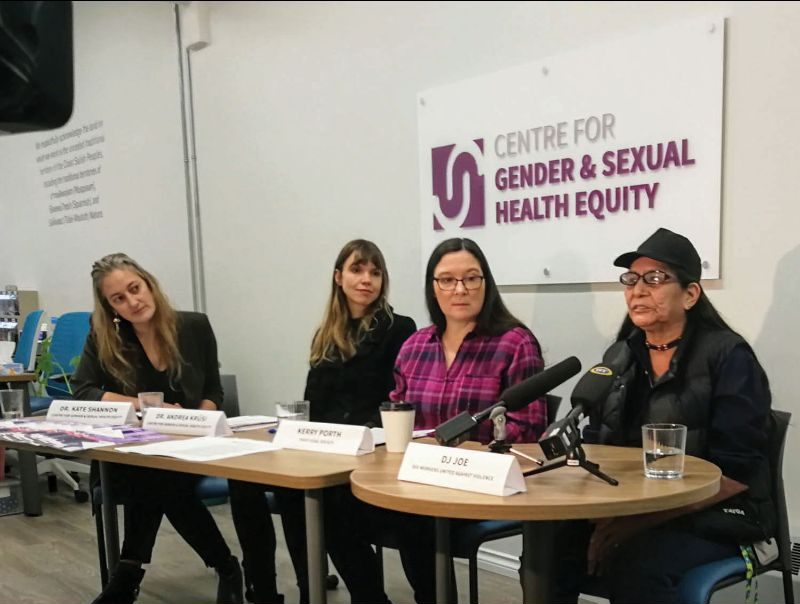 Published by the Centre for Gender and Sexual Health Equity on the eve of International Day to End Violence Against Sex Workers, the report recommends the full decriminalization of sex work, among other policy changes.

The report summarizes almost a decade of research from the AESHA Project (An Evaluation of Sex Workers Health Access) on the impact of Canadian laws on sex workers’ risk of violence and access to justice, housing, and health and community support services.

Canada – like a number of other countries including Norway, Sweden and France – has adopted “end-demand” sex work laws (also referred to as the Nordic model). This makes it illegal to purchase sexual services, but not sell them.

In 2013, the Supreme Court of Canada struck down as unconstitutional previous sex work laws that prohibited brothels, public communication for the purpose of prostitution, and living on the profits of prostitution. Then in December 2014, the federal government enacted the Protection of Communities and Exploited Persons Act (PCEPA). Based on the Nordic model, the PCEPA legislation criminalizes buyers of sexual services as well as third-party supporters.

Since 2010, the AESHA project has done interviews with more than 900 sex workers. Of those interviewed, 76 per cent reported that PCEPA reproduces the same harms to safety and working conditions as previous criminal laws. A further 26 per cent reported increased harms to working conditions, including a reduced ability to screen prospective clients, reduced access to safer work spaces and reduced ability to access clients (which meant longer hours, less pay or having to forgo safety precautions).

“Full decriminalization of sex work – removal of all laws targeting sex work – is necessary to ensure the safety, health and human rights of sex workers, including access to labour and other human rights protections afforded to all workers,” said Dr. Andrea Krüsi, CGSHE Research Scientist and UBC Assistant Professor.

Researchers from CGSHE, along with partners from Pivot Legal Society and Sex Workers United Against Violence, held a press conference Monday to present the new report.