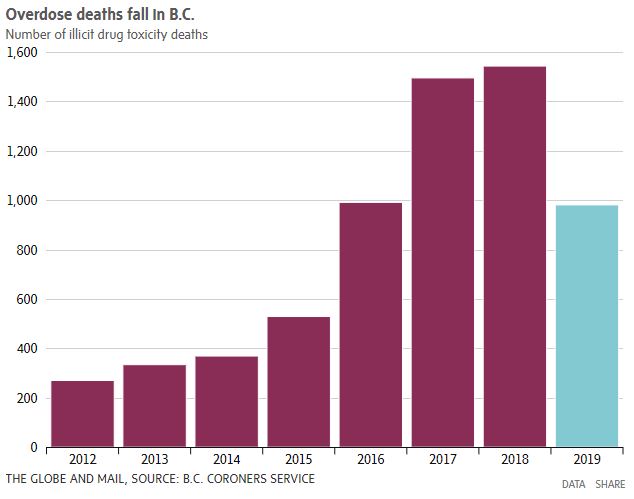 British Columbia’s first drop in overdose deaths since 2012 signals not the end of the public health crisis but the beginning of refocused efforts to prevent overdoses in the first place, health officials say.

Data released by the BC Coroners Service on Monday showed that there were at least 981 deaths in 2019 – a 36-per-cent decrease from 1,543 deaths in 2018. (The figure will likely grow as death investigations conclude.) It’s the first decrease since 2012, before which illicit fentanyl – a major driver of the overdose crisis – was so uncommon that it was not routinely tested for postmortem.

“Surviving an overdose is not enough. Stopping death is important, but it isn’t enough,” Dr. Kendall said. “We must refocus on implementing strategies to prevent overdoses from occurring in the first place, however politically challenging that may be.”

Similar stories can be found on the following: Times Colonist and Vernon Morning Star.