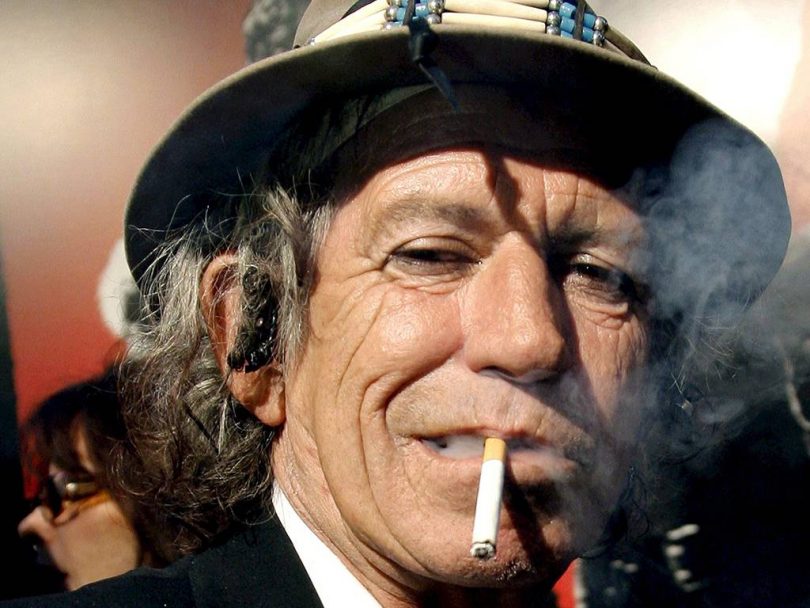 When Keith Richards takes to the stage May 12 for the Rolling Stones’ Vancouver stop on its current tour, fans may notice an extra spring in the septuagenarian rocker’s step.

They also may observe that one of his favourite performing accessories – a cigarette dangling from his mouth – is gone.

The lifelong cigarette smoker (and aficionado of many other drugs in bygone days) recently butted out to be in better shape for the tour.

“Done that, been there,” he told a New York radio station.

Ditching the smokes follows an earlier move by Richards to stop drinking.

Ex-smokers have healthy lung cells that can repair damaged ones: Nature

If it seems late in life for Richards (whose unhealthy lifestyle choices are legendary) to suddenly quit, a ground-breaking new study in the journal Nature reinforces how stopping smoking at any age can lead to immediate health benefits.

Researchers discovered that ex-smokers’ lungs contain a large amount of healthy cells that the body uses to repair the cells damaged by the habit. They say their results “shed light on how the protective effect of smoking cessation plays out at the molecular level in human lung tissue.”

Never too late to stop smoking

“The brain has receptors that bind and respond to nicotine in cigarettes,” says the physician at St. Paul’s Hospital and principal investigator at its Centre for Heart Lung Innovation.  “But once you stop this (brain) stimulation, normal (lung) functioning can return over time.”

Health benefits kick in right away

He says Richards likely began coughing after he quit several months ago. If that seems counterintuitive, Dorscheid says the coughing reflex returns upon quitting to clear out excess mucous and essentially clean out the former smoker’s system.

“Without that reflex, the tar and other toxins of smoking accumulate in the lungs and cause excessive inflammation,” he says.

Other benefits start to happen upon stopping. Dorscheid says blood pressure and other cardiovascular conditions like hypertension can improve, making the risk of stroke decline. The inflammation in the lung airways settles down, giving an overall sense of better well-being. Muscle function improves and of course, one can breathe better.

All this is good news for Richards, given the rigours of the tour.

Quitting wasn’t pleasant for Richards, who declared it was harder than quitting heroin. He’s been a notorious user of that drug to the point that he’s had multiple charges for possession (including one handed out in Toronto in 1977).

“Quitting heroin is like hell, but it’s a short hell,” Richards told an interviewer after he quit.

Dorscheid says that’s absolutely true. “Nicotine on some rating scales is the hardest addiction to stop. It can even be more difficult (to quit) than street drugs.”

That’s because of the frequent, positive reinforcement the brain’s pleasure centres receive with every puff. And Dorscheid says it’s why it can take people many tries before they finally quit. “Even early in their nicotine addiction, people can fail several times before being successful. Nicotine is a tragic addiction to beat.”

Smokers shouldn’t be discouraged by failed attempts to stop

He says it’s easy to get discouraged by repeated, failed attempts to quit. “Do not,” he counsels. “Realize it’s a difficult, but ultimately hugely beneficial journey to take.”

He advises getting support from doctors, family and friends, using smoking cessation aids and examining addictive patterns in one’s life then modify as needed to be successful.

Dorscheid says it could take up to five years for Richards’ lung function to return to a normal state for a man of his age.

If Richards’ uncanny ability to cheat death in the past and his new, healthier way of life are any indications, he’ll be around for that many years – and then some.