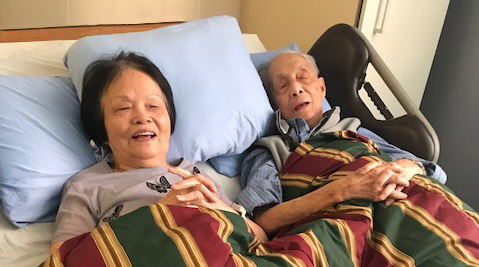 Mr. and Mrs. Tam have the best Valentine's Day gift of all.

When Wai Lin Tam, 93, moved into Mount Saint Joseph Residence a few weeks ago, staff were hopeful that she would be content in a single room right next door to the four-bed room where her husband had arrived just a few days earlier.

But when staff regularly found the couple squeezed together in the single bed in Mrs. Tam’s room, they wondered about their comfort and feared that one, or both, of them would get injured from falling out of the small bed.

“Both Mr. and Mrs. Tam moved here after short stays in acute care but she did not want to be in her room without him beside her,” says Suzana Philip, a social worker at MSJ Residence. “So we decided to order them a bariatric bed, which is an oversized bed typically used for plus-sized patients, so they can safely be in the same bed. This is how they’ve lived for 75 years, and we wanted to honour that bond.”

And just in time for Valentine’s Day.

The couple were introduced in their hometown of Taishan, China just a few days before they were to be married. It was 1945 and the Japanese occupation of China was drawing to an end. Living conditions had been very difficult during the war.

The couple had three children, two sons and a daughter, and decided to move to Canada in 1969 amid rising political tensions in Hong Kong. The family settled in Calgary and raised their three children while running a grocery story.

“My life was raising my babies, and then they grew up and went to university,” said Mrs. Tam.

Twenty years ago, the couple decided to make the move to Vancouver in search of better weather.

“Calgary is too cold!” says Mr. Tam. “We like Vancouver much better.”

Mr. and Mrs. Tam kept busy on the west coast with ballroom dancing, and enjoyed monthly visits from their growing family, which now includes seven grandchildren and four great-grandchildren. But deteriorating health forced the formerly active couple to give up ballroom dancing a year ago, and after a series of falls, both of them landed at Mount Saint Joseph Hospital in December.

“In my case, I don’t even really know how I fell but it was almost as if someone had pushed me from behind,” says Mr. Tam, who is recovering from a broken arm and now uses a wheelchair.

While the end goal for couples in long term care is always to move them into a two-bed room, it can take some time for the right room to become available for them to share. The bariatric bed has allowed Mr. and Mrs. Tam a safe and comfortable space to spend their time together, while making her room more home-like for both of them.

“It’s very important for Mr. and Mrs. Tam to settle and be happy,” says Suzana. “As care providers, we find joy in doing this because we understand the importance of relationships.”

Mr. and Mrs. Tam aren’t the only lovebirds who call MSJ Residence their home.

Though not on Valentine’s Day itself, a romantic couples’ lunch is in the works.

“Our amazing rehab team is coordinating a unique and romantic couples’ lunch on February 27th because we have five couples living with us at the moment,” says Carrie Willekes, resident care manager. “We also have some very devoted spouses who visit every day and also consider our place home.”

Meanwhile, Mr. and Mrs. Tam are beginning to get used to life at MSJ Residence.

“The staff are very good here,” says Mr. Tam. “The activities are good and we’re making many friends.”