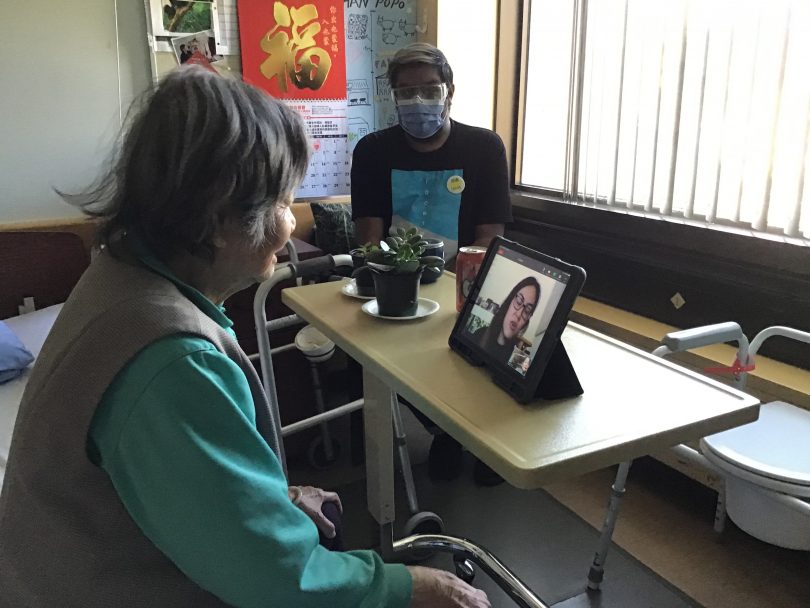 One of the residents at Mount Saint Joseph on a video call with a volunteer medical student as HIM staff member Jason Deo facilitates.﻿

Mrs. Wai Yee Ho’s husband used to visit her every single day at Mount Saint Joseph (MSJ) Residence. But that was abruptly halted in March, when COVID-19 changed everything. Mrs. Ho’s children live in the United States so they haven’t been able to come either.

The 82-year old is disappointed she can’t see her family face-to-face. She says her husband used to bring things for her regularly, but he is elderly too and doesn’t feel safe using the bus right now.

Mrs. Ho, who speaks Cantonese, is also worried about what’s happening outside her home, “It feels like a more tense environment everywhere. I read about ‘racial attacks’ in the community and it is scary.”

But one thing has been helping her get through the isolation. She has a new friend she regularly chats with via video call, Winston Jin, a medical student. She and Winston, complete strangers until just a few weeks ago, talk about daily life, Mrs. Ho’s medical issues, and world events.

The so-called “Popo Project” – popo is Chinese for ‘grandma’ – is part of the new Connecting with Compassion initiative launched by UBC faculty and students. The team is using technology to help families stay connected with seniors living in long-term care homes across B.C. The first part is delivering iPads to sites around the province, including MSJ. MSJ received 12 iPads, pre-loaded with videoconferencing programs, like FaceTime, Zoom and Skype, as well as a host of other apps designed to keep seniors engaged.

But it’s not just about keeping in touch with old connections. It’s also about making new ones, says the initiative’s co-lead, Dr. Mark Fok, a geriatrician at MSJ, who has been working on the front-lines of the COVID-19 outbreak. That’s where medical students, including Winston, come in, volunteering their time for weekly virtual visits with residents in long-term care homes.

So far, more than 30 students, speaking eight languages collectively, have volunteered with that part of the program, which UBC calls “Big Grandkids”. Riaya Suleman, a third-year UBC medical student, has been coordinating the roll-out. She says, “We have heard stories about students singing to their senior, seniors sharing photos, and pairs finding connections such as sharing the same favourite band or living in the same city previously.”

Finding ways to make a difference during the pandemic

Winston Jin’s second year of medical school wrapped up abruptly when COVID-19 shut down classrooms around the world. He started looking for any way to help, eventually finding the Connecting with Compassion team.

“It’s nice for me to be able to learn from these elders and hear their life stories,” says Winston. “They can give me insight on life and how they got to where they are. I’ve really enjoyed it, and glad I can make a difference.”

The 25-year old “Big Grandkid” meets with Mrs. Ho on weekly calls, all conducted in Cantonese. He emphasizes that it’s not just a one-way street. He’s getting a lot out of it too, especially as a future doctor, “With elders, especially if they have some sort of underlying cognitive impairment, it may be difficult to express what they are feeling. It’s important to listen and be patient and solve the issues together. Having this experience really helps. At the end of the day, you realize they need the most help compared to other patient populations. “

Two of the Providence staff who have been essential in getting the Popo Project off the ground at MSJ have never actually worked at a long-term care home before this. And technically, they still don’t. Jason Deo and Dana Pollard are actually part of the medical transcription department of HIM (Health Information Management). They have been redeployed to MSJ twice a week until the end of June to help out in the COVID-19 response, and are loving their time with the staff, residents and students.

“It’s a really nice feeling, and it’s really obvious that we are having an impact,” remarks Jason.

Even though neither of them can understand the conversations in Chinese, Dana remarks about how there is usually a “lot of laughter.”

A long-time resident of MSJ and the site’s ‘karaoke king’, Mr. Duong Tang says he really enjoys talking to a “young person”. Prior to COVID-19, his two sisteres would visit him regularly, and he’d entertain his fellow residents on the communal karaoke machine in the main lounge.

Now on his video calls with Imelda, they discuss his keen interest in music from all over the world. The 64-year old even has his own karaoke machine in his room, which he has proudly showed off to Imelda.

Next step: expanding the project

Dr. Fok says the plan is to keep expanding this successful initiative to more long-term care sites, with more student volunteers and more iPads. It will be rolled out in phases through the fall, and continue for one year, after which it will be reassesed.

But Suzana Philip, social worker at MSJ, says it’s already a huge success at their home. She is especially excited about how staff have been so quick to adopt the new technology to help residents, especially those without family, stay socially connected, “I have not seen so many staff using iPads before. It’s amazing!”

While the visitation restrictions at long-term care sites remain in place, the new friends will be limited to socializing online. But MSJ occupational therapist Faye Arnaly is already looking forward to the next step, “I hope one day when we do open, the students can come visit the residents in person.”

The Connecting with Compassion Intitiative at UBC was made possible with the generous donation of Dr. Edwin S.H. Leong. Dr. Roger Wong, Executive Associate Dean, Education, is the Faculty sponsor for the project.