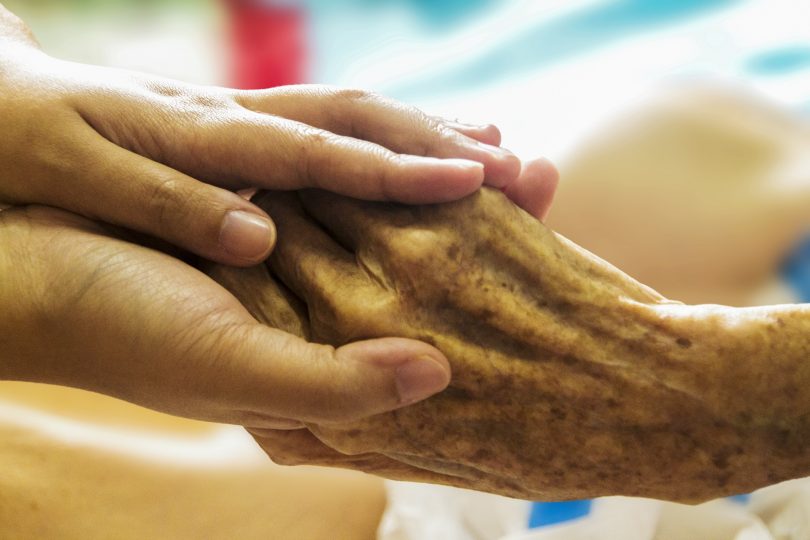 A new study shows some people may still be able to hear while in an unresponsive state at the end of their life.

Is hearing the last sense to go?

Family members and health care providers have long reported that patients nearing death will occasionally groan or make a small facial movement when they hear a familiar voice. But there’s been no empirical evidence to back up these anecdotes – until now.

A study published last month in Scientific Reports shows that some people may still be able to hear while in an unresponsive state at the end of their life.

Dr. Romayne Gallagher, a member of the Department of Family and Community Medicine at Providence Health Care, is one of the authors of the study. Now retired from clinical work, she was a palliative physician at St. John Hospice when the study took place. During her palliative care career, she noticed that patients seemed to relax when they heard the voice of a loved one at the bedside or over the phone.

“You can get some information from people, even if they’re not able to open their eyes or respond to you,” she says.

Dr. Gallagher had read other studies where researchers used technology to record the brain signals of patients with locked-in syndrome – a condition in which the patient is conscious but cannot move or speak due to brain damage.

She wondered if similar research could be done with palliative patients. So she reached out to Dr. Lawrence Ward of UBC’s Department of Psychology and then-PhD student Elizabeth Blundon to make it happen (this work would eventually became the subject of Blundon’s PhD thesis).

The research team used a cap with 64 electrodes to measure patterns of activity in the brain in response to different tones and auditory patterns. The electroencephalography (EEG) test was designed to show whether the brains of actively dying patients in palliative care still registered activity in response to sound.

They obtained consent from patients at St. John Hospice while they were still awake and able to converse and conducted an initial EEG test on them. Later, when those patients became unresponsive toward the end of life, the researchers conducted the same test once again. The final study represents an analysis of data from eight responsive hospice patients, five unresponsive hospice patients, and 17 healthy control individuals.

The researchers found that the patterns of brain activity in unresponsive patients were similar to those observed in the responsive patients and the young, healthy control group, suggesting that people still hear as they near death.

But it’s important to note that responding to a sound is not the same as comprehending its meaning. Dr. Gallagher stresses there are many questions left to be answered. For example, it is still unknown whether dying people are able to understand words, identify who is speaking, and whether they feel comforted by those words.

“People tend to jump to that conclusion and we’re not trying to promote that. We’re just saying this is early preliminary evidence,” she says. “Scientists are still trying to determine what defines consciousness and how you measure it.”

Still, evidence that hearing may indeed be one of the last senses to lose function as humans die lends some credence to the advice that loved ones should keep talking to a dying relative as long as possible. As a palliative physician, Dr. Gallagher always urged family members to talk to their loved ones in the final hours – and not just for the sake of the patient.

“We’ve always encouraged people to say what they need to say. It’s very comforting to say goodbye, to say I love you, I care about you – whatever you need to say,” she says. “It’s not just about comforting the person who’s dying; it’s also about the family members feeling comforted by their ability to express thoughts to them.”

Dr. Gallagher says the study wouldn’t have been possible without the support of the staff at St. John Hospice who, on top of caring for their patients, were tasked with alerting the research team when a study participant became unresponsive and facilitating the EEG test in what could sometimes be a very small window of time.