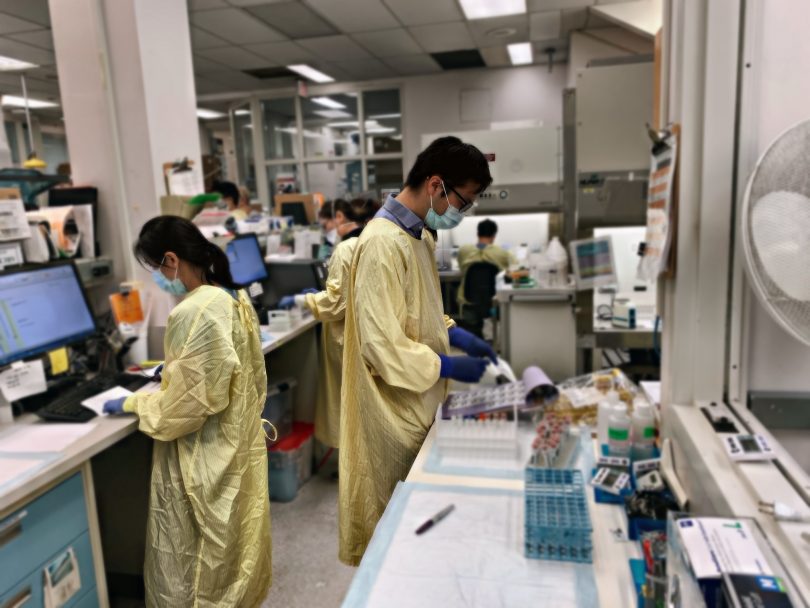 The laboratory at St. Paul's Hospital recently reached a milestone of 100,000 tests for SARS-CoV-2, the virus that causes COVID-19.

At the beginning of the summer, there were fewer than 3000 new COVID-19 tests done in B.C. each day. But Dr. Dan Holmes knew that likely wouldn’t last. As part of B.C.’s coordinated approach to COVID-19 testing, he and his team at St. Paul’s Hospital, along with their counterparts across the Provincial Laboratory Medicine Services (PLMS) and the regional health authorities, had already started planning how they could quickly scale up the numbers of tests they could perform in their laboratories.

Fast forward a few months to September. Dr. Holmes, Head of Pathology and Laboratory Medicine at St. Paul’s, did his first trial run using a different technique: pooled sample testing. As he explains, the idea is quite simple, “If you have a group of people where the chance of finding a positive is less than five percent, you can take individual samples and put them in the same well and test them together. If the collective result comes out negative, we can infer that everyone in that pool is negative also.”

If one of the pooled samples comes back positive, the individual samples in that well are tested separately to determine which individuals are positive.

In the St. Paul’s laboratory, samples from people who have been swabbed for the SARS-CoV-2 virus – the virus that causes COVID-19 – are being pooled together in groups of four. This means all the work and materials that would have been needed to run one individual’s test can now test four people at the same time.

“This approach significantly increases testing capacity and allows us to preserve reagents and other testing consumables that are in short supply,” says Dr. Marc Romney, Medical Leader for Medical Microbiology and Virology. (Reagents are the main ingredients needed to perform these laboratory tests – the kits include commercial testing kits, enzymes, probes and primers.)

“The St Paul’s pooling is impressively high-tech, taking advantage of advanced robotics and full data automation, and is even able to screen patient samples “on the fly” based on postal code,” says Dr. Blake Gilks, chief medical lab officer, PLMS. “This optimizes the way the system runs knowing that pooling works best with samples from areas with relatively few cases. To have done this while contending with a full clinical case load and the other challenges brought by the pandemic is exceptional work, and a great credit to Dr. Holmes and the team at SPH.”

Dr. Holmes applauds his team for coming up with innovative ideas on a limited budget to bring pooled testing to St. Paul’s. Mahdi Mobini, an engineering consultant at the site, wrote a number of computer programs to process the data along with an app to allow the pooled results to be reported to the patient record.

Mobini explains, “Once the results come back, data on negative samples can be quickly and efficiently checked over by a technologist, and then sent directly to the lab information system, all in one large group. That is likely about 330 or so negative results going out all at once.”

“This makes turnaround time faster and allows us to increase the number of tests we can perform here at St. Paul’s,” adds Dr. Holmes. “From there, any positive results will be pulled for separate individual testing.”

The laboratory has also made the process as automated as possible. A robotic pipetting device places the individual samples into the wells, speeding up the whole process and reducing the chances of human error. Programming of the pipetting robot was overseen by Grace Van Der Gugten while clinical validity of pooled results was evaluated by Drs. Chris Lowe, Nancy Matic and Gordon Ritchie.

“The SPH pooling project and their collaboration with other sites, especially Surrey Memorial Hospital, illustrates the type of team work province-wide that has allowed us to stay ahead of testing during this pandemic,” says Dr. Gilks.

But experts caution pooled testing only works when the numbers of positive tests remain low — below ten per cent of total tests conducted. In some regions of B.C., the positivity rate is now above the ten per cent mark, making the value proposition of sample pooling less attractive.

“We still need the collective effort of the public to keep our COVID-19 cases as low as possible so we can use this new tool to maximize our laboratory capacity,” says Dr. Holmes.  “We are in this all together, and while we do our part here in the province’s testing laboratories to increase capacity for testing, we urge the public to continue following public health advice.”