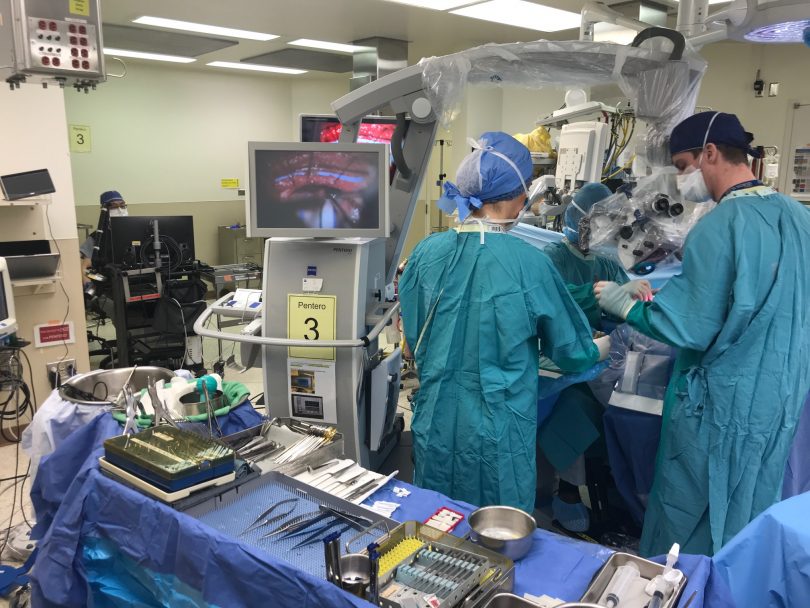 The team performing the surgery including Dr. Ryojo Akagami behind the microscope and neurosurgery resident, Dr. Michael Craig (right).

Fans of the 1970s TV show The Bionic Woman might remember that the lead character, Jaime Sommers, had superhuman hearing thanks to bionic implants in her ears. Science fiction at the time, cochlear implants to restore hearing to people with damage to their inner ear are relatively common today.

Auditory brainstem implants – a first for BC

However, cochlear implants fall short for people with damage to their hearing nerve, which sends signals from the inner ear to the brain. In these cases, an auditory brainstem implant can help, a surgery performed for the first time in BC by clinicians at St. Paul’s and Vancouver General Hospital. Most people who undergo this surgery have hearing loss related to a rare genetic disease called neurofibromatosis 2, which causes tumours to form on a person’s hearing nerves. The tumours typically damage the nerve, making traditional cochlear implants or hearing aids ineffective. An auditory brainstem implant can also help people who have fractures to the bones in the ear or other inner ear abnormalities that don’t allow for the use of a cochlear implant.

Dr. Brian Westerberg, a surgeon with St. Paul’s Adult Cochlear Implant Program, and Dr. Ryojo Akagami, a neurosurgeon with Vancouver General Hospital, led the team that performed the auditory brainstem implant, a delicate, nine-hour surgery. One of the most challenging aspects of this particular surgery is first removing the tumour around the hearing nerve.

“This is one of the more difficult tumors to remove – particularly in patients with neurofibromatosis – and the operation is done only in major centers,” says Dr. Akagami. “Fortunately, we have one of the most experienced teams in Canada.”

Once the tumour is removed, the team accesses the brain stem, located at the base of the brain and a nexus for many important sensory nerves. There, the surgeons implant a “paddle” containing 21 electrodes on the cochlear nucleus, the spot where auditory signals are processed.

“Dr. Akagami and I have worked together with Dr. Charles Dong, a specialist in intraoperative neurophysiological monitoring, for 20 years. In this surgery, that experience was essential for accurate placement of the implant as the anatomy on the brainstem where the cochlear nucleus is found was distorted by compression from the tumour,” says Dr. Westerberg. “I assisted (Dr. Akagami) with tumour removal and given my experience with cochlear implantation, I assisted with placement of the implant.”

Once the electrodes were in place, the receiver-stimulator — placed just under the skin above and behind the ear — was connected to the external processor. When activated, the receiver-stimulator is connected via radiofrequency to the microphones on a sound processor positioned behind the ear to pick up sounds. The electrical signal is then sent to the brainstem by the electrode array and the brain can interpret it as sound. In this way, the implant bypasses the damaged cochlear nerve and sends auditory left to right: Dr. Brian Westerberg, Dr. Arthur Henderson, neurotology fellow and Dr. Ryojo Akagami, part of the team that performed BC’s first auditory brainstem implant.signals directly to the brain for processing.

“Right there in the operating room, Myron and Jowan, together with Dr. Dong, tested the electrodes to ensure we were getting an auditory brain response on as many of the electrodes as possible. Amazingly, all the electrodes responded which means the best possible hearing result for the patient,” says Dr. Westerberg of the role played by ​Myron Huen and Jowan Lee, audiologists with St. Paul’s Cochlear Implant Program.

In addition to the two surgeons and two audiologists, the surgery involved four specialized neurosurgery nurses, neurophysiology monitoring staff and specialized neuro-anesthesiologists to ensure the anesthetic does not affect the monitoring of the implant – in total, nearly 20 people. The experience of Dr. Dong and his team in intra-operative neuromonitoring is especially critical for monitoring during tumour removal and placing the implant.

An auditory brain stem implant does not restore normal hearing. The hearing results vary by patient, but at minimum, the implant may allow people to hear and be aware of some medium to loud conversational and environmental sounds. It can also aid in the recognition of speech when lip-reading cues are available.

Until last month, British Columbians requiring this procedure were sent out of province, typically to Los Angeles, to receive the procedure. St. Paul’s/VGH is one of only a few locations in Canada where this surgery is currently available and the only one west of Toronto.

“We realized we had the expertise and equipment to do it here. The most challenging part of the procedure is removing the tumour near the nerve and we are fortunate to have a capable BC-based surgical team who are very experienced with tumour removal,” says Dr. Westerberg.