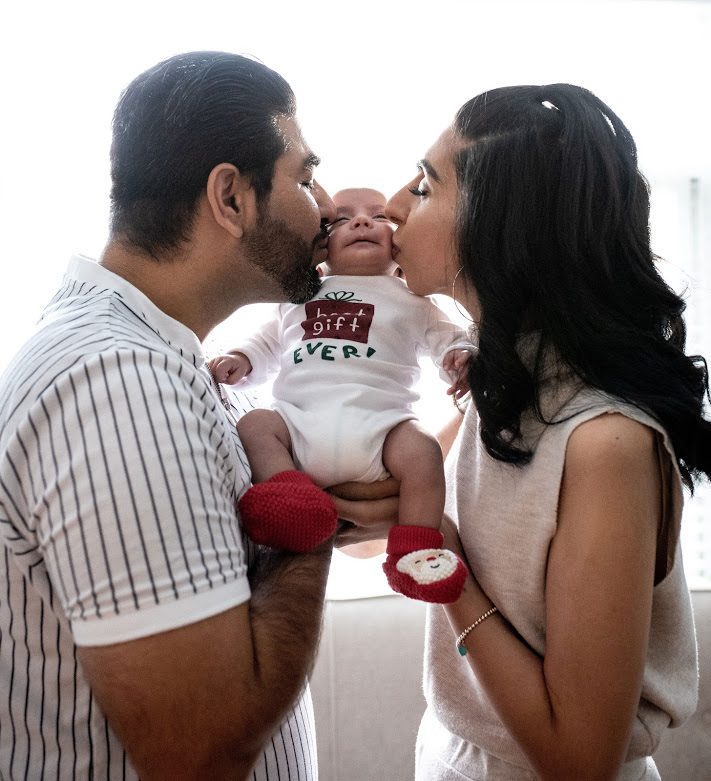 When Japleen Gill’s first child was born last October 2, she and her husband chose to name him Jeevan.

In Punjabi, it means bringer of life.

The name couldn’t be more apt, given the harrowing circumstances in which Gill gave birth – and the dramatic way a vast team from numerous disciplines at St. Paul’s quickly assembled to save her life and that of her child.

Gill’s introduction to motherhood goes back to her own birth. The 31-year-old was born with a bicuspid aortic valve, in which this valve, which pumps blood from the heart to the rest of the body, has two “leaflets” or doors, instead of the usual three. This can cause a variety of health issues, including placing extra stress on the heart.

For most of her life, this congenital condition didn’t interfere much. She was monitored by a cardiologist as an infant and later became part of the PACH (Pacific Adult Congenital Heart) program at St. Paul’s Hospital. When she became pregnant, cardiologists at St. Paul’s kept a close eye on her health as part of the Cardiac Obstetrics Clinic, known as COB.

The first trimester was fairly smooth. But by the second, “things went downhill,” explains the Vancouver teacher.

She developed a litany of symptoms – breathing problems, painful swelling in her fingers and toes, a fracture in her foot, and extreme abdominal pain – which prompted two visits to Emergency, Doctors there thought she may have had gall stones. “All the symptoms could have been related to the pregnancy,” she says, making a diagnosis difficult. “But then they became worse.”

When on September 28 she arrived for her regular outpatient visit with her St. Paul’s cardiologist Dr. Jasmine Grewal, she could barely walk. A battery of tests confirmed she had severe endocarditis (infection) of her aortic valve. The aortic root, which connect the valve to the heart, was infected as well.

“She was very sick with the infection. Her aortic valve was destroyed,” recalls Dr. Grewal, Director of the St. Paul’s Hospital Cardiac Obstetrics Clinic – the only one of its kind in the province. It treats some of the riskiest cases in BC. Gill was extremely unwell. She needed antibiotics and surgery, so Dr. Grewal immediately admitted her to Cardiac Intensive Care.

The heart condition would be serious for any patient. What made Gill’s situation more precarious was her pregnancy, which at that point was only 30 weeks along.

What followed was a delicate balancing act to keep Gill’s baby safe while treating her serious cardiac infection.

The Cardiac Obstetrics team quickly mobilized 30 people from multiple specialties for a Zoom call to develop a strategy for this unique case. There were doctors, nurses and other health workers from anesthesiology, obstetrics, pediatrics, from both St. Paul’s and BC Children’s Hospital, where the newborn would be moved for immediate pre-term care.

The care plan was this: a caesarean section to save the baby, then surgery to replace the damaged aortic valve and aorta with a human cadaver graft – a procedure called a homograft. This would provide protection against recurrent infection and let Gill have more children in the future.

Performing this almost immediately after a patient’s C-section would be a first in British Columbia.

So on Friday October 2, little Jeevan was born by C-section just shy of 31 weeks, weighing a mere three pounds. There were 30 people in the operating room, compared to the usual five to seven during a regular section.

“I remember the walls of the OR were rimmed with cardiac people just in case,” recalls Gill. Her chances of going into cardiac arrest were high.

Her baby inspired her

Jeevan was immediately whisked to BC Children’s NICU. The separation was difficult for Gill but her tiny infant inspired her to be strong for her own surgery. “I saw him at Children’s via video. He was connected to so many tubes and so I thought, ‘if he could go through that, I could go through my surgery.’”

Her homograft surgery was performed just three days later. St. Paul’s cardiac surgeon Dr. Jamil Bashir, who led a team through the homograft procedure, says while endocarditis cases are common, “when the infection gets to the point of being a root abscess, immediate surgery is needed. This condition is 100-per-cent fatal if it’s not treated.”

The operation went well and Gill was discharged on October 15. Meanwhile, her son, now more stable, was moved back to St. Paul’s NICU in mid-October, where he stayed till November 8.

Both mom and baby are now doing well.

The vast team was readily available

The case was an unforgettable one for the St. Paul’s teams involved, emphasizing how effectively numerous different disciplines can unite to care for high-risk patients from across BC. “It highlights how the St. Paul’s team really came together to develop a plan and to trust one another,” says Dr. Grewal. Obstetrical nurse Jenna Baumgartner was thankful for the specialized collaboration involved.

“Everyone was readily available for coordinating her critical-care needs to provide Japleen and her baby with the best treatment.”

Gill was pointed to a virtual meetup St. Paul’s has organized for new moms, especially complex-care mothers. She’s found it helpful to speak with other new moms and capture some kind of normalcy about her highly unusual entry into motherhood, where she missed out on prenatal classes, postpartum bonding and breastfeeding.

She is profoundly grateful to the entire team at St. Paul’s and at BC Women’s that saved her baby and saved her own life.

“I felt so holistically, completely taken care of.”