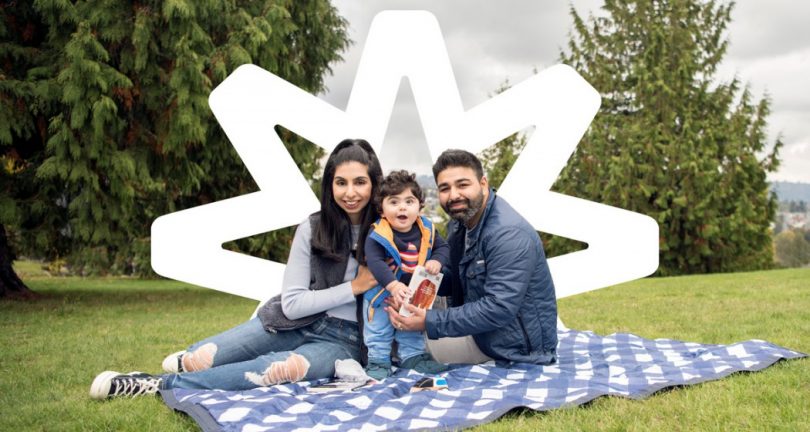 Last fall, Japleen Gill and Gaurav Johal were expecting their first child. But what should have been the most joyful time of their lives quickly turned into a nightmare. Japleen developed a catastrophic heart infection. She had an emergency C-section to deliver their tiny son just shy of 31 weeks followed by a six-hour operation to replace her infected heart valve. “If it wasn’t for St. Paul’s Hospital, I don’t know where we would be today,” she says.

Japleen looks back on the whirlwind of last year with a mixture of amazement and gratitude. “Somehow, all the stars aligned for us!”

Hope for the best, plan for the worst

Japleen had a mild heart condition that was monitored at the Pacific Adult Congenital Heart (PACH) Clinic at St. Paul’s Hospital. It had never caused any concern.

Shortly into her second trimester, her hands and feet started swelling and she was often short of breath. She chalked it up to normal pregnancy side effects. But during a routine visit with St. Paul’s cardiologist Dr. Jasmine Grewal, Japleen was diagnosed with stage 4 heart failure: it didn’t just threaten her life, it threatened her baby’s life, too. She was admitted to Cardiac Intensive Care on the spot.

At the centre of a life-or-death emergency, everything became a blur. That’s when clinical nurse educator Jenna Baumgartner stepped into action.

Within an hour – and in consultation with Japleen – Jenna had a plan, a backup plan, and all the equipment needed to give both of her patients their best chance. Then she brought the entire team together for a Zoom meeting to review every detail.

In a BC first, Dr. Grewal and the Cardiac Obstetrics Clinic mobilized 30 specialists to handle the C-section and the risk that Japleen could go into cardiac arrest. Baby Jeevan was delivered safely and whisked to the NICU at BC Children’s Hospital.

“I still can’t believe there were so many people there for us. What a birthday for Jeevan! To be born in the presence of so many professionals who were there specifically to keep us safe and healthy.”

Three days later, when it was time for her heart surgery, Japleen had the same surge of emotion. “I wasn’t worried: I knew I was in the best place. That Dr. Jamil Bashir and the cardiology team were amazing. That everything would be okay.”

As most new parents will attest, it’s challenging enough when your pregnancy and your newborn follow all the usual milestones. But when you factor in the pandemic, a fragile preemie, and the physical and emotional toll of healing from two major surgeries, it’s easy to understand why the first few months were especially hard for Japleen and Gaurav.

“When I went for my appointment with Dr. Grewal that day, I wasn’t expecting to be admitted to the hospital. So we didn’t even have a diaper bag!” When Jeevan finally came home, Japleen was still healing and unable to hold him. She worried he wouldn’t recognize her or her heartbeat. Anxiety and post-partum depression began to set in. “I felt like I was in ‘fight or flight’ mode all the time,” she recalls.

The support network at the hospital was a lifeline. “The care I received through my entire journey was so holistic and compassionate. The nurses and the entire team helped me – sometimes in ways I didn’t know I needed help.”

They referred her to a post-partum group and a reproductive therapist. And in a truly ‘above and beyond’ gesture, one of the hospital’s social workers helped Japleen navigate the maze of paperwork to apply for compassionate care leave. “I didn’t even know I was eligible for that,” she says.

With time and support, Japleen healed and Jeevan grew into a sturdy, happy toddler. Today, family life is chock-a-block with what Japleen calls the “joy of the day-to-day.”

This fall and winter, the family’s celebrations include Jeevan’s first birthday, Diwali, and Christmas. “It’s been one big year of growth for us all! And St. Paul’s has been here for us at every step. We are so grateful!”